96.6% Endorsement For New DCE For Bunkpurugu 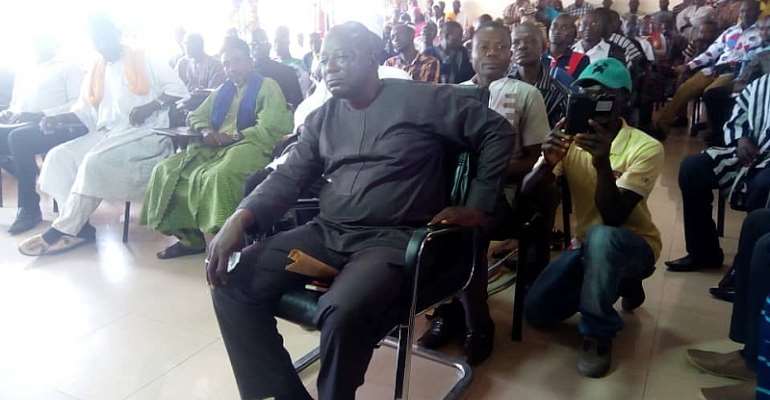 29 members voted yes to confirm him out of 30 Assembly Persons who were present and cast their votes, no rejected ballot, only one person voted no, the election was conducted by the Electoral Commission of Ghana today Tuesday 24th July 2018.

Hon. Majeed Duut, who is an accountant by profession, has been working with the Ghana Education Service at Savelugu before his appointment, he is, however, thankful to His Excellency the President of Ghana for his appointment.

Chamba Alhaji Majeed was once the District Accountant at GES Office and presiding member of the same Assembly he currently going to serve in the high office as DCE. He appealed to the entire gathering especially, Chiefs, Religious Leaders, Departments Heads, Party faithful, Opinion leaders, the Youth and family members to support him to serve the district with integrity devoid of factionalism and troubles.

Hon Majeed showed gratitude to the Assembly Members who gave him the needed cooperation by coming together as one family with a common purpose to grant him this awesome endorsement. He added that, what is next now, is for them to come together to work and improve the living conditions of residents in the District, especially in the area of Roads, Education, Health, Agriculture, and Security, etc.

As a former PM of the area, Chamba Majeed pledged to work hard to validate the confidence reposed in him by the President and the Assembly members.

Alhaji also called on all to get rid of negative attitudes that would divide the district and focus on how they can collectively bring the ongoing National Development set by President Nana Addo Dankwa Akufu Addo into the high esteem office.

"I am confident that, when we desist from all manner of ill deeds and troubles, there will be no excuse for the progress we are witnessing. I am very thankful also to the Northern Regional Minister and his affable Deputy (MP) for my Constituency for the role played in the entire confirmation process, I will not forget my colleague Hon Oscar Liwaal for his support," Alhaji Majeed expressed.

Lom Community Radio in an exclusive interview with the intellectual and vibrant new DCE, said and I quote, I am coming to put my best, but my best can only be achieved if we all put in our best for our District, it is a collective effort of all and not an individual, we are to ensure that policies are implanted to enrich the lives of our today and future society, but we can also succeed in doing this when your cooperation and contributions towards peace and unity is available at all time. He pledged to run an open administration, to ensure that people with great ideas were brought on board, to facilitate the development of the area

The Northern Regional Minister Hon Alhaji Salifu Saeed, after swearing the new DCE in, thanked members of the assembly for their kind gesture with the full endorsement of the DCE, this to me, means that the assembly is geared towards development. Let me also thank all our revered chiefs especially the Bunkpurugu Naba, Nakpanduri Naba and Gbankoni Naba respectively for the role you all played in this exercise.

The Minister, however, announced the movement of Hon Oscar Liwaal to the Yunyoo-Nasuan District as the DCE, he explained that Hon Oscar will continue as DCE without any confirmation by Assemblypersons as the President has –reposted him to Yunyoo with reference to his hard work at the old Bunkpurugu-Yunyoo District (his current post)

The Occasion brought together several residents within and outside the District, including friends of the DCE, natives from Nakpanduri, NPP constituency executives, religious leaders, women and youth not excluding the security.