What Caused The Inflation On The Liberian Market And Who Is Responsible? Ellen Or Weah? 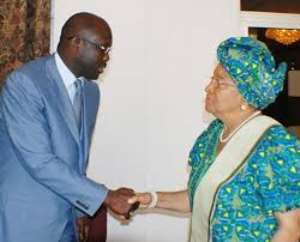 There have been augmented alarm and booming cry on the Government of Liberia in recent time. The increase in the prices of commodities and the exchange rate on the Liberian market has been like an outburst of tears and frustration and that the current regime is responsible for said problem as some claimed, why others, on the other hand, claimed that the past government is responsible for said economic crisis. But before going further, let us first take a look at inflation from a broader perspectives.

A year or two ago, the Liberian market began experiencing inflation when aggregate demand for goods and services in the country's economy rose more rapidly than its productive capacity. One potential shock to the aggregate demand came from the Central Bank of Liberia under the former regime presided over by former president Madam Ellen Johnson Sirleaf that rapidly increased the supply of money. The increase in money in the Liberian economy increased the demand for goods and services. Businesses could not significantly increase production and supply remained constant. Prices began to rise, resulting in inflation. On the other hand, the prices of production process inputs increased. There was a rapid wage increase and rising raw material prices.

Now, let's talk about the exchange rate which is also an issue of critical national concern. Aside from factors such as interest rates and inflation, the exchange rate is one of the most important determinants of a country's relative level of economic health. Exchange rates play a vital role in a country's level of trade, which is critical to most every free market economy in the world. For this reason, exchange rates are among the most watched, analyzed and governmentally manipulated economic measures. But exchange rates matter on a smaller scale as well: they impact the real return of an investor's portfolio. Here, we too should know what determined the exchange rate of Liberia's economy, know who is responsible for such and if noticed, was it expeditiously handle?

Before we answer these questions and look at these forces, we should sketch out how exchange rate movements affect a nation's trading relationships with other nations. A higher currency makes a country's exports more expensive and imports cheaper in foreign markets. A lower currency makes a country's exports cheaper and its imports more expensive in foreign markets. A higher exchange rate can be expected to lower the country's balance of trade, while a lower exchange rate would increase it. In Liberia, import payments in 2016 shrank by 22.0 percent to US$1,210.3 million, from US$1,551.4 million recorded in 2015. The fall in import payments during the review year was driven by declines in all of its main categories, namely, petroleum (by 20.8 percent), rice (by 22.6 percent), machinery & equipment (by 26.3 percent) and the ‘other commodity exports’ (by 20.1 percent). Statistics on sources of imports to Liberia have continuously declined from 2014 – 2016. At end of 2016, preliminary statistics showed that North America and the Middle East experienced 33.9 percent and 30.0 percent declines in trade to Liberia. On the other hand, Asia (mainly China), Africa (especially ECOWAS) and Europe (specially the Euro Zone) were the top three regions which accounted for significant amount of imports payments from Liberia. Asia (mainly China) accounted for 33.4 percent of total import payments, while Africa (especially ECOWAS) and Europe (specially the Euro Zone) constituted 28.9 percent and 17.9 percent, respectively.

The excess demand for foreign currency lowers the country's exchange rate until domestic goods and services are cheap enough for foreigners, and foreign assets are too expensive to generate sales for domestic interests. From preliminary statistics, the overall balance of payments (BoP) deficit marginally deteriorated by 0.4 percent to US$182.8 million in 2016, against the deficit of US$182.2 million recorded in 2015. On a dissimilar trend, it significantly improved by 27.8 percent compared with the deficit recorded in 2014. The slight widening in the overall BoP deficit, despite improvement in the current account deficit was clearly reflective of Liberia’s increasing dependence on external goods, services, income, and financial investment for domestic consumption.

Luberia probably engaged into large-scale deficit financing to pay for public sector projects and governmental funding. While such activity stimulates the domestic economy, Liberia, with large public deficits and debts has probably been less attractive to foreign investors. Why? A large debt encourages inflation, and if inflation is high, the debt will be serviced and ultimately paid off with cheaper real dollars in the future.

In the worst case scenario, the former regime printed money to pay part of a large debt, but increasing the money supply inevitably caused inflation. Moreover, if a government is not able to service its deficit through domestic means (selling domestic bonds, increasing the money supply), then it must increase the supply of securities for sale to foreigners, thereby lowering their prices. Finally, a large debt may prove worrisome to foreigners if they believe the country risks defaulting on its obligations. Foreigners will be less willing to own securities denominated in that currency if the risk of default is great. For this reason, the country's debt rating is a crucial determinant of its exchange rate. Below is the Central Bank Statistics on the exchange rate from 2014-2016.

Firstly, the Government of Liberia will have to directly or indirectly reduce the money supply by enacting policies that encourage reduction of the money supply. Two examples of this include calling in debts that are owed to the government and increasing the interest paid on bonds so that more investors will buy them. The latter policy raises the exchange rate of the currency due to higher demand and, in turn, increases imports and decreases exports. Both of these policies will reduce the amount of money in circulation because the money will be going from banks, companies and investors pockets and into the government’s pocket where it can control what happens to it.

Secondly, the Government of Liberia will have to increase interest rates through the central bank of Liberia. When banks increase their rates, fewer people want to borrow money because it costs more to do so while that money accrues at a higher interest. So, spending will drop as well as prices drop and inflation will slow.

Thirdly, the Government of Liberia will have to increase reserve requirements on the amount of money banks are legally required to keep on hand to cover withdrawals. The more money banks are required to hold back, the less they have to lend to consumers. If they have less to lend, consumers will borrow less, which will decrease spending.

About the author:
Alpha G. Gray is a student of the University of Liberia reading Biology major with emphasis in Medical Science. He is also a youth and student activist who is so passionate about his field of study and wants to make the case in his scientific life. He can be contacted via ([email protected]) ([email protected])

Let’s avoid violence, anything that will tarnish image of NP...
55 minutes ago