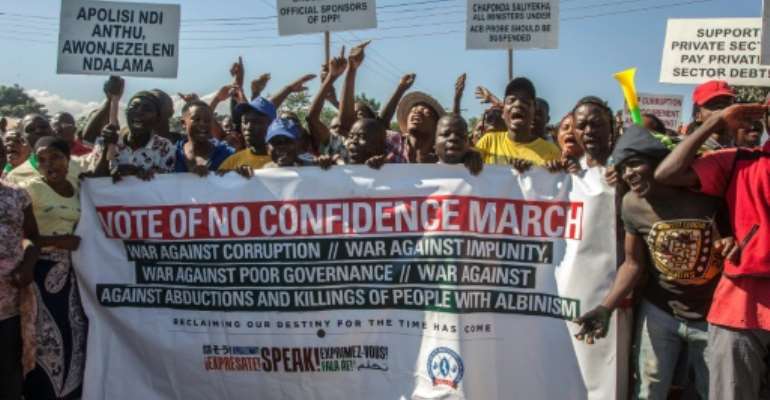 Mutharika has faced protests over corruption and incompetence. By Amos Gumulira (AFP)

A leaked report from the country's elite Anti-Corruption Bureau accused Mutharika of receiving a $195,000 (167,000-euro) bribe from a contractor tasked with supplying $4 million worth of rations to Malawi's police. He has faced no formal charges.

"I am not doing this for personal gain. In fact, I only get 40 percent from my (monthly) salary of 2.7 million kwacha (about $3,600) and the rest goes to government," he told the cheering crowd at the party congress in Blantyre.

Mutharika did use his speech to warn against newly-elected party leaders abusing their positions.

"I know some of you go to companies saying I am the director in the DPP so give me business. I am warning you -- you must stop. I know you," he said.

Former president Joyce Banda, who is seeking the nomination of her People's Party to take on Mutharika in polls due in May, joined anti-government pressure groups and called for the president to resign.

"When a president is not involved looting or shady deals he or she does not hesitate to instruct arrests of those involved... he should therefore respond to Malawians call to step down," she told AFP.

Banda was implicated in a vast corruption scandal in 2013 which contributed to her defeat in polls a year later.

She then went into self-imposed exile abroad before returning without any legal difficulties at the end of April this year.