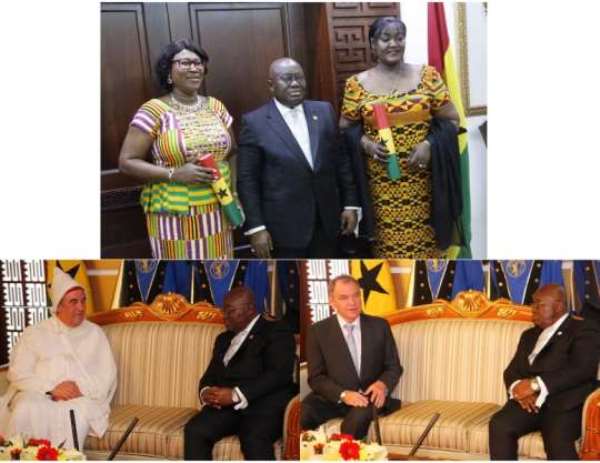 President Nana Addo Dankwa Akufo-Addo on Friday presented two newly appointed Ambassadors with Letters of Commission and Credence, charging them to safeguard and promote the image and interests of Ghana at all times.

The two envoys, Mrs Gloria Opoku, is headed for Senegal and Mrs Jane Gasu-Aheto is to go to Guinea. Both of them are career diplomats. They swore to the Oaths of Allegiance, Office, and Secrecy.

President Akufo-Addo urged them to be mindful of the fact that they represented a country regarded as one of the most stable on the continent, a beacon of democracy, governed by the rule of law and respect for individual liberties, human rights and the principles of democratic accountability.

He reminded them of the onerous responsibility to guard jealously the image of Ghana, and to promote Ghana both economically and socially.

The President further charged them to strive to develop cordial relations with the professional Foreign Service officers at their duty post as 'they have invaluable experience and knowledge of the terrain, which should help you work effectively. You will need their assistance, and they will need your guidance and leadership.'

He also asked them to establish good rapport with Ghanaian nationals who would be vital to their prospects of success in their respective countries, noting, 'they will be counting and looking up to you to champion not only our nation's interests, but theirs as well. Do your best not to disappoint them.'

President Akufo-Addo reminded them of the good bilateral ties between Ghana, Senegal and Guinea, and asked them to deepen the cooperation between them and look for new ways of boosting the ties between Ghana and those nations.

He told them to at all times tailor their interventions to the objective to build a Ghana Beyond Aid, saying, 'Ghanaians have placed their hopes of a better life in us... we cannot disappoint them.'

Mrs Aheto, on behalf of both ambassadors expressed appreciation to the President for the confidence reposed in them and pledged to work within their abilities to deepen the relations between Ghana and Senegal and Guinea, which occupied a special in the scheme of things in the ECOWAS region.

The President, who earlier received the credentials of the Moroccan, Bulgarian, Tunisian and Portuguese ambassadors to Ghana, assured them of his government's support to strengthen the relations between Ghana and their respective countries for their mutual interest.