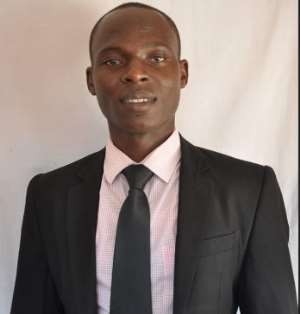 I carefully read through figures fabricated and peddled out there by Dr. Mahammudu Bawumia in attempt to cover-up strange the depreciation of the cedi. It must be noted that Ghana's economy relies heavily on the strength of the local currency to enhance our imports and exportation of semi-finished products as well as raw materials. So, therefore, any attempt by falsehood peddlers like by no less a person than our vice president could have downbeat implications on the economy.

First of all, before I throw light on exchange rate and local currency depreciation under both NDC and NPP; let me set the record straight: our currency never depreciated by –247% between 2009 to 2016 as stated by Bawumia. It must also be noted that between 2000 and 2008, the currency again never depreciated by –72% as stated by him. These erroneous figures I believe were manufactured to project NPP ahead of NDC in management of our local currency.

The most fundamental questions in this brouhaha include meaning of exchange rate and depreciation of our local currency. Exchange rate is the value of our nation's currency against other nations' currencies. In Ghana, we quote our cedi (directly or indirectly) in terms of the US dollar since the latter is one of our leading major trading partners. In our floating exchange rate regime, a fall in value of our local currency against other currencies (depreciation) and its management continue to affect portfolio investments and our real business environment. Mathematically, depreciation is calculated by dividing reciprocal of end of period rate by reciprocal of beginning of period rate and substrate the result from one. The new result can then be multiplied by 100%. The resulted negative figure gives you the so-called depreciation. This can also be calculated by subtracting end of period rate from beginning of period rate under review, divide the result by end of period rate and multiply the new result by 100%. These two methodologies gave same answers using same variables. It must be acknowledged that both depreciation and appreciation of our local currency are very much instrumental in ensuring stability of fundamentals in the economy.

According to Dr. Bawumia, between 2000 and 2008, the value of the cedi against the dollar moved from GHC0.70 (7,047.7 old cedis) to GHC1.20 with a depreciation of –72% (the correct figure is –41.6% using any of above mentioned depreciation methods). This was a true fabrication bundled by him to deceive the general public; in fact, the NPP government left a dollar to cedi exchange rate of GHC1.90 in 2008. By this establishment, the cedi rather depreciated by -63% from GHC0.70 in 2000 to GHC1.90 in 2008 when he Bawumia was a deputy governor of Bank of Ghana. The abysmal performance of the cedi in 8 years of NPP government is evidenced from how poorly they managed the economy through outrageous and haphazard pumping of money into system through Bank of Ghana. In the midst of these mediocrities under Bawumia and his NPP apparatchiks, according to BoG's Non–Oil Forex Sales document for 1997 – 2007, amount of US$621.06 million was spent to prop up the cedi from 2002 to 2004. It backfired as the dollar still took lead. Between 2004 and 2007, amount of US$757.42 was further channelled into the economy to rescue the cedi, yet it drastically depreciated than ever before. They notoriously went ahead and desperately redenominated the cedi, sold Ghana Telecom and Ghana Airways, borrowed additional US$1 billion, among several other measures to support the cedi but to no avail. Can this same Bawumia and NPP government be addressed as better managers of the cedi?

It is a palpable lie to say the cedi depreciated by –247% in 8 years of Mills–Mahama administration (the correct figure is –71.4%). The NPP government on January 7, 2009 left an exchange rate of GHC1.90, not Bawumia's GHC1.20. This means the cedi depreciated by only –55% from GHC1.90 in 2008 to GHC4.20 in 2016 instead of Bawumia's fictitious –247%. These are facts and figures from BoG's own annual reports. Dr. Bawumia's figures and calculations might be descending from Jupiter. This embarrassment is becoming worrisome because our vice president is an economist of repute and ought to know implications of vile economic propaganda and falsehood in management of the economy. As a country, I think we should begin speaking out the truth devoid of political mischief.

As we speak, BoG is yet to release its annual report for 2017. The annual average exchange rate of the cedi is usually reported by BoG in its annual report but as it stands now 2017 annual report is not out. Yet Dr. Bawumia managed to create his own annual average exchange rate for 2017 and middle of 2018. He sat in his house, cooked figures in Samira's kitchen to project –7% depreciation from GHC4.20 in January 2017 to GHC4.5 in middle of 2018 (–6.6%, approximately –7%). For now, until BoG releases 2017 annual report, the only reliable source for exchange rate updates available is the forex market. According to leading forex bureaus the value of the dollar is GHC4.72, meaning under president Akufo and Bawumia the cedi depreciated by –11% from GHC4.20 to GHC4.72 after they have pumped over US$1 billion into the economy to strengthen it (cedi). By this forex market updates, it means if NPP government is given 8 years mandate, the cedi would have depreciated by –66% in excess of –11% under NDC's 8 years regime.

Conclusively, I want to state categorically that this debate is not only hopeless, it is undoubtedly one of the most meaningless, useless and needless issues from the many illogical claims Bawumia continue to put out there for no reason. Dr. Bawumia was only reminded of his infamous video on cedi depreciation, why should our vice president choose to insult Ghanaians for asking him a fundamental question? His call for this irrelevant debate in the midst of excessive rise in fuel price, insufficient hospital beds, poor roads network, collapse of local banks accompanied with widespread corruption, among others amounts to display of arrogance and disrespect for Ghanaians. If there is any debate that should occupy our time: that debate should be about reducing our over reliance on imported goods and how to add value to our raw materials for local consumption and exportation. We need a debate that can help poor Ghanaians afford shelter, food and clothing like every living human being on earth. We need a debate that can help us implement our free health care and education policies in pragmatic ways to build our human capital. We need nation building debate, not this bogus immature currency debate.

Thanks
By:
David Yaw Mordey, a Ghanaian born and Indian based young Economist.

Hottest Photo Reports
Catch up with all the political quotes from our politicians.
Advertise here
More Opinion
ModernGhana Links
GUPS Election Today
The Bro. Felix Obuah I Know
How BoG Should Respond To The Run-Away Inflation And High Cost Of Living (1)
Nkoranza Youth vrs Ghana Police Service And Matters Arising
Annual Ban On Drumming And Noise-Making Is Not “pagan And Heathen”
Your pride won’t feed us, Mr. President
Nurses should break the frontiers to change the Professional Status Quo
Consequences of uncontrolled distribution of humanitarian and military aid in Ukraine
Religious profanity versus civility
TOP STORIES