Why I Chose To Be A Scientist And Not A Politician 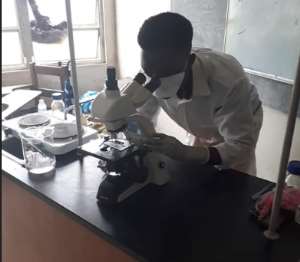 Science, in its context, refers to the knowledge about or study of the natural world based on facts learned through observations and experiments. Doing series of scientific research and solving problems in order to arrive at conclusions requires hard study, determination, self courage and discipline. I have over the time been asked by my innermost self "why should I become a Scientist instead of being a Politician?"

Unlike Politicians, Scientists are distinct, decent and remarkable set of knowledgeable creatures that inspire the universe through critical thinking and analysis, scientific research, problems solving, discoveries and inventions. And with this, one can even become a politician without studying politics as a specific discipline. Politics in itself is embedded into Science. Why didn't I chose to be a politician instead I chose to be a Scientist?

I later became to retrospect on my childhood days when I was just a fourth grade student and wanted to become a Civil Engineer. I decided to get around older people who found themselves in the field of Civil Engineering. I then began to practice drawing (especially house plans) and focus on Mathematics since I never had the opportunity to link it with Physics due to my class level at the time. But with such elementary ambition I used to like Science as my most favourite subject followed by Mathematics.

However, with what I thought of, I became practicing Mathematics and made it my second most favourite subject next to Science. I did not know at the time that this was not my discipline neither what I was destined for. When I entered the senior high school I started to get acquainted with new subjects like Biology, Chemistry and Physics. I had the opportunity at that time to focus on the two subjects (Mathematics and Physics) that would build me up when I enter college to do Civil Engineering.

Later did I know that it was still not my discipline. Again I asked myself these questions: "what should I do as a student that I will be passionate of in the future"? How is it going to benefit me, my generation and the society in which we live?" And these questions were answered in my dream which I saw myself wearing a white coat in a very large hospital and attempting to sick patients.

When I woke up from bed the next morning I decided to pray against the dream not knowing that it was something that was shown to me by God. The following week I had the similar dream and when I got on campus I heard some of my colleagues calling me Dr. Gray! Dr. Gray! I then said to myself that this should be my ambition. So I started to focus on Biology and Chemistry, and build a network with some who were already medical doctors.

Then I became finding answers to these questions and I realised that I had to make the difference. After some times of critical thinking and analysis upon which my decision was made, I derived at these answers:

▪Science advances my knowledge of the world. Science is simply a method for uncovering the state of the world. Science is incredibly easy and reflects something basic about human nature. Of course, some scientific investigations are technical, depend on fancy tools, and involve complicated mathematical analyses. The easy part is that scientists start with questions. Why does this happen? How does that work? Scientists answer their questions through observations and experiments. Everything depends on clear empirical evidence.

▪Science is everywhere around me--- Without science, I would not read whatever I'm reading today, and without science, there would be no hospitals or medical centers, no computers, no internet, and no blogging, let alone all the other technologies I am so used to.

▪Scientific progress is crucial to my future--- The world is constantly changing and evolving. There have been changes for the better, like the web, which has revolutionised the way we store and access information. But there have also been bad changes. mankind has been making huge demands on the planet’s resources and the environment.

Now I need to find new solutions for almost everything humans do, from energy and food production to waste disposal and clean water supply. There are lots of fascinating and crucial roles that science can prepare me for:

• Protecting the environment and its biodiversity, and combating the effects of climate change by reducing carbon dioxide emissions and limiting global warming

▪ Scientific research sets you on the pathway to develop new ideas and promote the medical system of your country and the rest of the world.

▪ Science expands your knowledge to invent and discover new machines and tools that would change the level and appearance of nature.

With these reasons, I have become a lover of Science. I chose to live with it and vice-versa. And as I move on in my scientific studies I ought not to allow my circle to be disturbed for it is passion for life, compassion for recipient. I stand to be a student of Science!

About the author:
Àlpha G. Gray is a student of the University of Liberia reading Biology major with emphasis in Medical Science. He is so passionate about his field of study and wants to make the case in his scientific life. He can be contacted via ([email protected]) ([email protected]) Tel: +231776915195

The channel we used was the same channel Joy FM used to get ...
36 minutes ago