“Reclaiming Our Rivers Ruined By Galamsey Will Be Both Arduous And Expensive!” 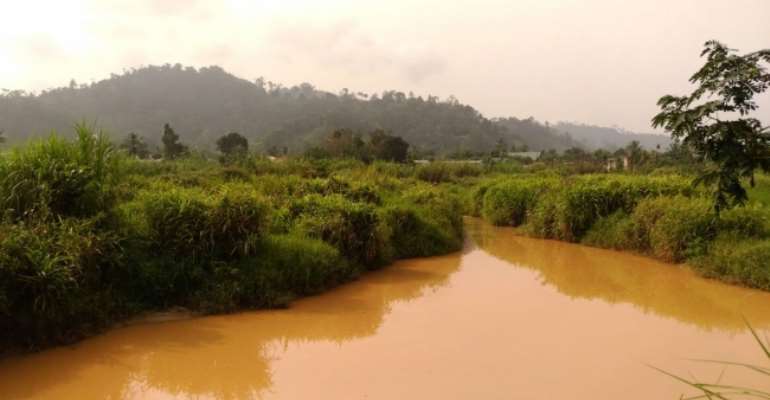 At his “ Meet The Press” encounter with journalists in Accra on Tuesday, 10 April 2018, the Minister of the Environment, Science, Technology and Innovation (MESTI), Prof. Kwabena Frimpong-Boateng, made it clear that the task of rehabilitating the rivers and farms destroyed by the galamsey operators, is going to be arduous and extremely expensive. A survey made of what it will take to reclaim a single river, the Ankobra,

had estimated that it would cost U$450! If the mind boggles at what it will cost to reclaim a singe river, what about the others? Rivers such as Pra, Birem, Densu, Tano, Offin, Oti, the Black Volta, the White Volta and others?

Ghanaians must put on our thinking caps and unite to eradicate an enemy – galamsey – that is killing our nation slowly but which is sustained by a few greedy businessmen and “bigwig” politicians, in collusion with foreigners. These wicked people are putting pressure on the government to lift the ban on galamsey or (as they have “sanitised” it to be called) “small-scale mining”. But what must be clearly understood is that there is no such thing as legal small-scale mining. For the Constitution of Ghana makes it OBLIGTORY for any licence (or concession) granted in respect of mining, to be RATIFIED by Parliament before the licence can be used.

But back to what Prof Frimpong Boateng told journalists. He said:

QUOTE: First of all, when the ban [on small-scale-mining] is lifted, an agreement that we are coming into with the UN Industrial Development Organisation (UNIDO) will kick in. We are doing some basic land studies to examine the level of mercury poisoning in the miners themselves, the communities they work in and the water bodies around, including fish, so we know the level of mercury poisoning. …When that is done, the result will be transmitted to the global environment community and we will have the chance to apply for funds that will help us in reclaiming the lands.

I must say that it is not a cheap exercise. We commissioned a company to look at Ankobra River and the amount it’s going to cost us reclaiming it.That river alone is going cost us 400 million dollars to get it reclaimed. And we estimate that about five to ten percent of Ghana’s area of 230,000 square kilometers is involved. In other words, we have to restore an area of 23,000 square kilometers. This is not a cheap exercise and that is why we have to stop this destruction from going on.

(THE MINISTER WENT ON): Between February and April last year, we were unable to process the water in a lot of our treatment plants – in Osino, Kyebi, Sekyere-Hemang and Daboasi – because of the increased turbidity of the water...One thing that we’ve noticed is.... that about eight mining companies are still doing things illegally. When you monitor the rivers at the point where they discharge their effluent into the system, those areas have a high turbidity. So we believe that if we are able to clamp down on some of these companies, we will be able to increase our ability to change the quality of the water in the rivers.

….Our estimates show that a lot of the gold is smuggled pout of the country]. . How much [the income from god] is left here? If the [local miners] had that money, wouldn’t it change the way they look and the way they live? Why didn’t they invest in other areas where they can employ people outside the gold business? And if they say they are losing 500 million cedis, then how much of it goes into the government chest? If we look at the figures that they [miners] put out, they have a lot more questions to answer.

...The e Cabinet has approved a Multilateral Mining Integrated Project (MMIP). But so long as the illegality is going on, the MMIP will not work. [However], we are implementing a lot of the components of MMIP -- land reclamation, training of miners etc.… We’ve[already] trained about 600 miners in sustainable mining at Tarkwa, at the expense of the government.

We need to do a lot of studies: for example, some people want to do fish farming in some of the excavations left in the mining sites. [But] a lot of the excavations are not stable. They can break in and collapse so we can’t do fish farming there. Sometimes, you need to stabilize the excavations with drugs and other materials before you can even think of fish farming. Apart from that, we have heavy metalcontamination (like lead). ...Everything goes into the soil and eventually into the water bodies. So we need to examine these areas before we can talk about an alternative livelihood. In fact in Kibi, a company that examined land in an area found that the land is so poisoned that you can’t even grow maize on it! That is why the CSIR, again, is helping us with certain plants because we know that certain plants can absorb heavy metals. What we may have to do is to plant some low-line vegetation like broccoli, salads and so on, to mop up the heavy metals. When you do that over three or five cycles, then there’s a possibility that we can... release the land to plant things that human beings will consume.

So we are doing a lot of harm to ourselves and the steps that we have to take to remedy these things are not easy. We need a lot of science and dedication and we are working on it.