Are We That Hungry As A Nation Or We Are Just Cheap? 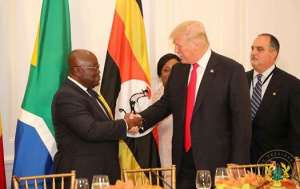 Politicians have devised means to lie to the entire Ghanaian populace that this Ghana US military base establishment came at no fee. Not everyone is dump to believe this fallacy you know?. On the other hand, if we accepted the deal based on the US $20 million, then the answer is YES to the heading of this article. How cheap could we be, are we going back to colonization where the British used our own people to enslave and impoverish us of our own resources?

I would like to ask questions on this new agreement between the president of Ghana and the USA and hope to get answers. First of all, what actually motivated the government of Ghana from 1998 and 2015 to make such deals with the United states? The United States in my own perspective is not a friend to any nation unless they want to use you to their best selfish interest. A commonly expressed belief states that the Central Intelligence Agency (CIA) had ties with Osama Bin Laden 's al-Qaeda and its " Afghan Arab " fighters when it armed Mujahideen groups to fight the Soviet Union during the Soviet war in Afghanistan . The Central Intelligence Agency helped Osama bin Laden build an underground camp at Khost , which bin Laden used to train Mujahideen soldiers. The United States would later attack this camp when bin Laden was held responsible for the United States embassy bombings in Africa (Source, Wikipedia: Allegations of CIA assistance to Osama bin Laden). This only tells us how manipulative, cunning, selfish and deceitful the USA has being since the time of Abraham Lincoln till now just to maintain their position as the world’s super power nation.

It is not a crime to have military engagements with the United States but the part of the clause which indicates that, Ghana will be training US military here is quite unbelievable and a simple lie which kids in the nursery school wouldn’t even believe. There is no iota of truth in that said clause. Additionally, the clause denotes that, the US army could freely import and export their ammunitions any day anytime without interference or any interrogation from who so ever. Have we taught of the possibility of them smuggling any valuables from Ghana to the USA or the import of harmful materials from the USA to Ghana? Again, they are not allowed or illegible to pay taxes, move freely around the country which possibly includes whatever their actions would be without anyone infringing upon their actions (for example, this may include a US military force rapping a Ghanaian civilian and we have no right to send him to court, imprison or take any legal action) are we kidding? And considering the exemption of paying taxes on equipment and their use of our radio spectrum for free, have we monetized the cost to the nation in the next 20 years based on these exemptions?

What is the essence of having a parliament house with members of parliament whose voice do not represent the people who elected them? This agreement was vehemently disapproved by majority of the Ghanaian populace who sensed danger upon reading few of the clauses. As I earlier stated, the USA is not a friend to any nation, with the current global economic challenge, survival depends on who is smart and powerful to win. Notwithstanding the fact that, this contract had being there since 1998 through to 2015, I think we still stood the chance of amending or totally abrogating this contract. If we preach Ghana beyond Aid, we should do it right and stop acting desperately hungry and accepting the unacceptable.

Moreover, this is a country whose hatred for African Immigrants and Ghana as no exception is quite detestable and repugnant and whose leaders go to the extent of making derogatory remarks about the country by use of repulsive adjectives like “SHITHOLES”, we trust such a country of being our military ally? Once again, the whites have successfully proved their superiority over blacks by deceiving us into signing this contract which has the tendency of sending the nation backwards but I pray this action wouldn’t trigger any extremists/terrorist attack even though it’s possible because the USA is a number one enemy to most extremists and as such any weaker state that associates itself with the USA becomes vulnerable to future attacks. In God we trust, our prayers should be for the good of the nation. Long live Ghana, long live to our long existing peace.