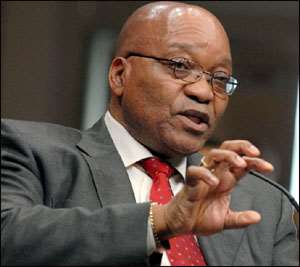 The curtain has finally come down for an ethically-challenged African leader whose departure and its timing had long been the subject of speculation.

Last month Jacob Zuma was forced out as South Africa's president about a year shy of the date his term would have officially ended. He held his nation's top job for nine scandal-plagued years.

A pale shadow of Nelson Mandela, the highly-revered first president of post-Apartheid South Africa, Zuma had been hit with a string of mostly corruption-related indictments as he exited the presidency. It seems about the only misdeed he wasn't accused of is human rights violations, but that is probably because the vibrant democratic character of the new South Africa made sure he didn't cross that line.

As a corrupt political leader in Africa, the disgraced former president had plenty of company. Like his fellow leaders, he saw political power as little more than a means for politicians to enrich themselves at the expense of the people. Over the years, a huge fortune worth billions of dollars that could otherwise have gone to significantly improve the living conditions of their impoverished citizens has been stolen by unscrupulous African leaders.

Prominent among these rulers-turned-crooks were Mobutu Sese Seko of the Congo (Zaire) and Sani Abacha of Nigeria, both of whom stole billions of dollars from their countries' coffers before they died, leaving their vast illicit treasure in the hands of foreign banks and out of reach for their governments. And among those leaders who are still alive, few can claim innocence of sleazy behavior involving the theft of public funds.

The most brazen villains still around include the former Angolan president Jose Eduardo dos Santos, the former dictator of The Gambia Yahya Jammeh, the president of Equatorial Guinea Teodoro Obiang, the president of Gabon Ali Bongo, and the president of Cameroon Paul Biya. Most of these leaders preside over oil-rich economies yet have failed to alter the harsh socio-economic circumstances of their citizens. The bulk of the oil revenue is routinely diverted into the bank accounts of the rulers and their families.

It had to take more than coincidence for the daughter of Angola's former president to emerge as one of a handful of African billionaires. And just as suspicious is the source of the huge wealth of the high-living son of Equatorial Guinea's president.

Further down the line is Robert Mugabe, who not only ran the Zimbabwean economy into the ground during his 37 years of authoritarian rule but also grabbed whatever he could find from the coffers of the bankrupt nation. His infamous wife, Grace, earned the nickname Gucci Grace for her shopping junkets to Europe and South Africa, while their two young sons tooled around in fast and expensive cars and lived like playboys in South Africa. Mugabe's ministers also did quite well for themselves financially.

Meanwhile, ordinary Zimbabweans struggled on a daily basis to feed their families both as a result of the lack of jobs and having to contend with perennially empty grocery shelves.

Jacob Zuma exhibited this characteristic ethical weakness of an African leader when he decided, among a slew of other questionable acts, to make building a palace for himself using public funds a priority over addressing the chronic social and economic problems that beset deprived South African communities such as Soweto.

I couldn't be happier that he is gone and will now have to answer for abusing the public trust. Paired with Mugabe's equally ignominious ouster last November, Zuma's departure means two fewer crooked leaders for Africa to deal with. Let's hope more and more of them will be exposed and disgraced in the course of time.

The channel we used was the same channel Joy FM used to get ...
33 minutes ago