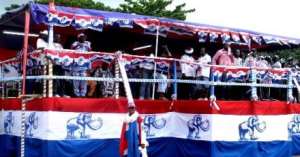 The NPP constituency chairman for Amenfi East in the western region, Asafoankye Kwaku Badu in his bid for re-election, called on all illegal small-scale miners popularly known as galamseyers to a meeting in Wassa Akropong on Wednesday, 7th February, 2018 at Apostolic Continuation church off the Moseaso road and committed himself to protecting their illegal trade against government's policy of bringing to an end illegal small-scale mining.

The government earlier in 2017 imposed a six-month ban on small-scale mining and later extended it for extra three months as part of efforts to end illegal mining and its related activities, which adversely affected the environment.

As part of the measures to regulate the activities of the illegal small-scale miners, the government has set up a committee to monitor development in the sector before its five-year Multilateral Mining Integrated Project (MMIP) would be implemented.

The government had earlier in August tasked a joint military and police task-force code-named Operation Vanguard, to enforce the ban on illegal mining.

The constituency chairman, Asafoankye Kwaku Badu during the meeting assured the illegal small-scale miners that as the Chairman of the ruling party, he is charging them to go all out to ply their trade because he is going to use his office to protect their activities and no security operative can interfere with their activities especially the operations of Operation Vanguard. He averred that he will resist any government policy that brings their activities under threat.

He declared his intentions to seek re-election and further reiterated that all these will be possible only if he retains his position as the Chairman of the party in the constituency as such every site owner must contribute not less than Ghc 5,000 to help his campaign and also go all out to campaign for him of which most the galamseyers started making the said contribution and others pledging to do so later.

Asafoankye Kwaku Badu has on record openly attacked the NPP Government on policies concerning the ban on illegal small-scale mining.

Among these public attacks include an open forum by the committee seeing to the implementation of the MMIP and Media Coalition against small-scale miners. Any opportunity given him either on radio or public hearings, he goes all out to attack the government and other organizations helping to bring to an end the activities of illegal small-scale miners.

The leadership within the party looks on unaware. It is rumoured that the DCE is benefitting from the trade of galamsey activities hence her silence which has motivated the Chairman to believe that he is untouchable. Even though civil society and concerned opinion members in the society are worried about the development, little seems to be done about it. Recently, Joynews reported Amenfi East District as the ‘once vibrant headquarters’ of Galamsey, which has changed.

It is interesting to note that, most of these galamseyers have moved further into the forest, and continuing their ply of trade knowingly to the Leaders in the District who have turned a blind eye.

The task force does not have the eye and resource to see everywhere and the people appointed by the president to deal with it are also not helping. The Chairman has on several occasions promised to protect the galamseyers against any government action as the destruction of forest and water bodies continue unabated in Amenfi East District.

Most people in the constituency are surprised as to if NPP has measures to control members who publicly fight against government policies just like Asafoankye Kwaku Badu because they still do not understand why a whole constituency chairman will go all out to ensure that his party fails in government because the fight against galamsey if won will be a major boost for the party to retain power.