What Are The True Authentic National Colours Of Ghana? (1) 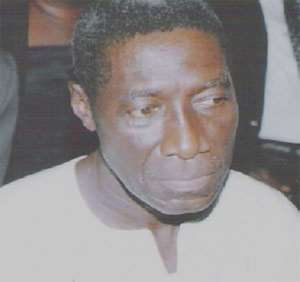 “Say it loud, I am black and proud” –James Brown

In a month's time, Ghana and Ghanaians shall be celebrating 61 years of nationhood. Today, Thursday February 8, 2018 should have afforded all Ghanaians the opportunity to listen to the State of the Nation's Address by the President, Nana Addo Dankwa Akufo-Addo. However, that was not to be. There are many people in this country who stay in the capital town of Ghana, the City of Accra, who are denied all the basic necessities of normal life such as affordable medical care, pipe-borne drinking water, grid powered electricity, decent roads leading to their houses and of course those homeless people who sleep under bridges and at bus stops. This country, since independence, has witnessed a mixture of political administration made up at sometimes of elected devils and at other times of self-imposed angels. All of them almost invariably have behaved like the drunken driver driving under the influence of alcohol and wee or the educated illiterate who reads the newspaper upside down and yet keeps on laughing and smiling to himself or herself regardless of his or her folly. The result has been classical national disaster and calamity

Under normal circumstances, this article should have been written by Wednesday, February 7, 2018. That gives me up to Thursday morning to read through before dispatching it to the Editor. On numerous occasions, events conspire against me not to make this schedule of mine possible. On this last faithful Wednesday, just as I sat down around 1.30 pm to type the article, “fui” the electricity went off. I had hope that the light would come on pretty soon. By 2.00pm the following day after about 24 hours break in electricity transmission to where I reside, the light was still out somewhere on a honeymoon. I knew the article should get to the Editor by 5.00pm Thursday, if it is to appear on Friday. The problem confronting me was that I had MOBA National Executive meeting to attend pretty soon in town that same evening. So it was either I had to wait a little bit longer hoping the light will come on or call the Editor to find another article to fill my column. Just when I was about to make that call to the Editor to forget about me this week, presto, the light came on. It was of a little joy to me since I missed completely the President's State of the Nation Address. This is 21st century Africa and I cannot afford the luxury to decide whether I should listen to my president or not.

The issue of quality of life in this part of the world described as “shithole” is of great concern to me. However, there is one other matter which under normal circumstances should not have been added to our problems if we have had competent and honest leadership since independence: the question of what constitute the true authentic national colours. Every crèche pupil will tell you from memory that the national colours are red, gold, green and black. The big issue is what shade of red, gold and green. Next month, we shall be celebrating our 61st. independence day. The national flag will be hoisted all over the country and I can bet my last bottom pesewa that National Protocol will display different varieties of the national colours depending upon which part of the nation you find yourself.

When the nation was celebrating Ghana @ 50, I challenge the Ghana @50 secretariat under Mr. Wereko-Brobbey to come out clearly to tell the whole nation the true shades of the national colours. My call was just an insignificant one compared to the more audacious issues which were confronting the secretariat. So my call went unanswered. And today the nation still finds itself in that quagmire of identifying the true shades of the national colours. I would have held my peace but for the insult by our sports administrators, especially those at the helm of affairs, the Ghana Football Association. It is a sad reflection of the poor national psyche; there has never been a serious discussion on the colours of the national kits of our sportsmen and sportswomen particularly the various national teams. Indeed it should be a topic which should cut across the jersey or the vest our national athletes are clothed in during international competitions.

The national colours are red, yellow, green and black. So if anything at all, the kits of our athletes who compete at the international level should reflect the national colours. Coming back to the Black Stars, it passes all understanding that after 61 years of independence, our football administrators cannot agree on a colour scheme which will make the nation proud and easily recognisable and identified with the nation by the international community. Great football nations all over the world are recognised and identified by the national jersey they wear. Ghana was not called Gold Coast for nothing. Our football administrators without any reason very often select the white colour while at times a mixture of red and some other colour schemes which do not mean anything at all. So why should the Black Stars adopt the colour white which has no place in the national colours? The choice of white depicts lack of foresight, patriotism and philosophical understanding of the national psyche.

I believe the time has come for the debate on the national colours of the kits our athletes on international assignment wear be carried out for appropriate solution to be found. I believe the time has come for Cabinet to make a ruling on the issue. Representing the nation on international arena in the sports field has assumed serious international geo-political gymnastics. Russia is battling to compete under her national colours after her athletes have been banned for doping. Notice the way North Korea and USA are jostling each other to assume supremacy during the coming winter Olympic Games. I start the debate by suggesting that our national athletes should be clothed in all yellow: yellow jersey or vest, yellow shorts, yellow stockings with black stripes on the jersey and shorts and the numbers and names of the athletes written in black with the goalkeeper in all green or red outfits. All red can be adopted as the away colour in the case of group sports like football and hockey where the national colour clashes with the colour of the home team. For those who believe there is nothing in wearing the national colours, I wish to refer them to an article written for BBC by Ben Smith titled: “The Story of Brazil’s ‘Sacred’ Yellow and Green Jersey”.

Ya-Na commiserates with Mahama
29 minutes ago