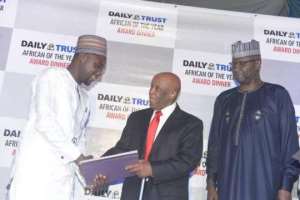 Mr Mutaru Mumuni Muqthar, the Founder and Executive Director of the West Africa Centre for Counter Extremism (WACCE) has been honoured as the 2017 Daily Trust African of the Year.

The event which was held in Abuja, Nigeria also honoured a Lifetime Achievement award to retired Professor Magdi Habib Yacoub, a renowned Egyptian-British Cardiothoracic Surgeon at Imperial College, London, who has performed more lung transplants than any other surgeon in the world and Head of Magdi Yacoub Heart Foundation Project in Egypt for his extraordinary service to humanity.

Mr Muqthar, a Ghanaian born Counter-Terrorist and a Civil Society Activist was selected for the award by the Pan-African selection team led by Festus Moghae, the Former President of Botswana, who in 2016 succeeded the selection committee's first Chairman, Salim Ahmad Salim, the Former Prime Minister of Tanzania.

The 35 year-old, who carries home a cash prize of $25,000 donated by United Bank for Africa, (UBA) is the youngest African to have ever won the coveted award for his work in turning young people in West Africa, including university students, away from terrorism.

In an interview with the Ghana News Agency in Accra at the weekend, Mr Muqthar revealed that his inspiration to get involved in the fight against terrorism was when his family became victims of the deadly Nanumba/Konkomba conflict that took place in Northern Region in 1994.

He said the conflict was the worst civil one in Ghana since its independence in 1957 and had claimed at least 1,000 lives and tens of thousands were displaced.

Mr Muqthar said, the WACCE works across West Africa to deepen the understanding of violent extremism and radicalisation, while promoting the support available to vulnerable groups.

'The WACCE team of professionals engages with would-be extremists and takes them through a support system, de-radicalises them and helps re-integrate them into society, school and work.'

He said the vision of the WACCE is to create a sustainably peaceful society and build social resilience against fear, whilst its mission is to inspire sustainable peace and social confidence through working with the local community to uncover the underpinnings of conflicts and violence and to support State and regional counter-terrorism and security strategy.

He identified the group most susceptible to the Jihadist message to be youth who are in their early twenties with high school education, university students as well as those who were obsessed with social media and those frustrated over lack of employment opportunities.

His efforts in the fight against terrorism has already been recognised by other organisations. In 2016, he was invited by the US State Department to Washington DC to meet President Barack Obama as Mandela Washington Fellow of the Young Africa Leadership Initiative.

He said, his Centre has so far rescued 20 Ghanaian youth from extremism as it prevented radicalised Ghanaian boys from leaving this country to join ISIS in Syria.

Born in Kidengi, a village near Salaga in the Northern Region to a family of peasant farmers, Muqthar holds a Bachelor of Science degree in Business Administration from Ashesi University, Ghana.

Mr Muqthar is a member of the Global Shapers of the World Economic Forum, a member of the Africa Renaissance Movement, Honorary Fellow of Addio Pizzo, an anti-mafia organisation in Sicily, Italy, and was a finalist of the United Kingdom Alumni Awards 2016 for his impactful contribution to the fight against violent extremism in Africa