African Union Demands Apology From Donald Trump For His “shitholes” Comment. The Us President Denies 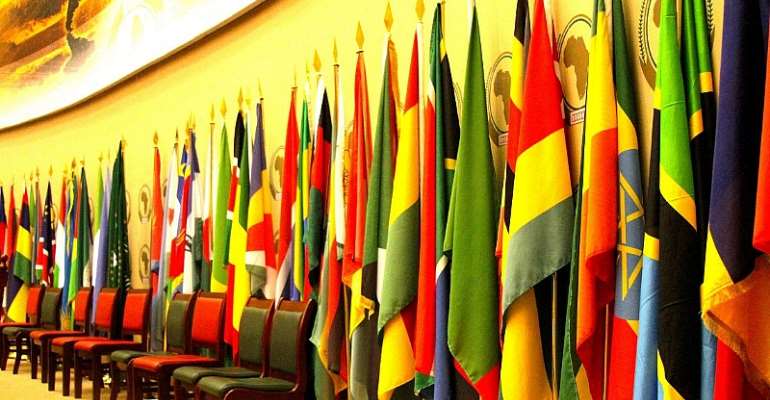 According to several media reports, Donald Trump, the US President insulted Africans by calling citizens of Africa and Haiti “shitholes” during a bipartisan discussion on immigration at the White House on Thursday, 11th January 2018.

The African Union (AU), representing African Countries, has demanded that US President Donald Trump apologise for using such word for black Africans and Blacks in general.

The AU’s mission in Washington DC expressed its "shock, dismay and outrage" and said the Trump administration misunderstood Africans.

But Mr Trump has denied using the language reported. He has been backed by two Republicans who were at the White House meeting, but Democratic Senator Dick Durbin said Mr Trump called African countries "shitholes" several times and used "racist" language.

Mr Trump on Friday tweeted that the language he used at the private meeting with lawmakers to discuss immigration legislation had been "tough". But he added that the words attributed to him were "not the language used".

US Senator Durbin said, “Trump said these hate-filled things, and he said them repeatedly"

What exactly did Trump say?
The remarks were allegedly made when lawmakers visited him on Thursday to discuss a bipartisan proposal that would impose new restrictions on immigration but protect the so-called "Dreamers" - hundreds of thousands of immigrants brought to the US illegally as children - from deportation.

Mr Trump was said to have told them that instead of granting temporary residency to citizens of countries hit by natural disasters, war or epidemics, the US should instead be taking in migrants from countries like Norway.

"Why are we having all these people from shithole countries come here?" the Washington Post quoted him as saying.

Mr Durbin said that when Mr Trump was told that the largest groups of immigrants with Temporary Protected Status (TPS) were from El Salvador, Honduras and Haiti, the president responded: "Haitians? Do we need more Haitians?"

But in another tweet on Friday the president denied that he insulted Haitians.

Donald Trump tweeted, “Never said anything derogatory about Haitians other than Haiti is, obviously, a very poor and troubled country. Never said “take them out.” Made up by Dems. I have a wonderful relationship with Haitians. Probably should record future meetings - unfortunately, no trust!”

However, many US media outlets reported the comments on Thursday, quoting witnesses or people briefed on the meeting. The White House did not deny them.

What did the African Union say?
AU said the "remarks dishonour the celebrated American creed and respect for diversity and human dignity". It added: "While expressing our shock, dismay and outrage, the African Union strongly believes that there is a huge misunderstanding of the African continent and its people by the current Administration.

"There is a serious need for dialogue between the US Administration and the African countries."

“Given the historical reality of how many Africans arrived in the United States as slaves, this statement flies in the face of all accepted behaviour and practice," AU spokeswoman Ebba Kalondo told the Associated Press news agency.

The pan-African grouping represents 55 member states throughout the continent. It succeeded the Organisation of African Unity - which originated in the decolonisation struggles of the early 1960s - in 2002.

Not only the AU, the UN and other countries have also reacted.

"I'm sorry but there is no other word for this but racist", said a spokesman in Geneva.

In the UK, Prime Minister Theresa May's office said Ms May did not share Mr Trump's reported characterisation of the nations.

A spokesman declined to comment on "alleged private remarks", but asked if Ms May viewed the countries Mr Trump was referring to as "shitholes", the spokesman replied: "No."

An immigration policy analyst in Washington DC made the point that immigrants from Norway actually did badly out of immigration to the US at the turn of the last century.

Alex Nowrasteh, an immigration policy analyst at the Cato Institute, said "this shows that the 'loser immigrants' from yesterday's 'shitholes' tend to turn into excellent, rich Americans after a few generations while their countries improve substantially".

Another Republican Senator who was there, Lindsey Graham, did not deny the comments were made. "Following comments by the president, I said my piece directly to him yesterday. The president and all those attending the meeting know what I said and how I feel," he said.

"We always knew that President Trump doesn't like people from certain countries or people [of] certain colours," said Congressman Luis Gutierrez. "We can now we say with 100% confidence that the president is a racist who does not share the values enshrined in our constitution."

Congresswoman Jan Schakowsky said: "Just when you thought Donald Trump could not get any more racist, he digs down to an even deeper low."

Some Republicans spoke over the alleged remarks.
Republican Congresswoman Ileana Ros-Lehtinen, who was born in Cuba and whose south Florida district includes many Haitian immigrants, said: "Shame on him. It is reprehensible, it is disgusting, it is racist."

African-American Senator Tim Scott, who says America is "born from immigrants", is quoted as saying: "If these comments are the president's words, they are disappointing to say the least."

Haiti's US Ambassador Paul Altidor told the BBC the idea that "we're simply immigrants who come here to take advantage of the US" is wrong.

In South Africa, ANC deputy secretary general Jessie Duarte said: "Ours is not a shithole country and neither is Haiti or any other country in distress. And it is extremely offensive for President Trump to make statements about other countries that are really not complimentary of the US's position or policy positions on those countries."

In Nigeria, one resident in Lagos told Reuters news agency: "Calling [every] African country shithole is really, really, very bad and I think every African country should just learn from this and probably just stay in their country and work with their resources."

The US ambassador to Panama resigned, according to Reuters news agency, telling the State Department in a letter that he could no longer serve in the Trump administration.

On Friday, Mr Trump ignored press questions about the issue as he signed a proclamation declaring a holiday in honour of civil rights hero Martin Luther King Jr - as presidents do every year.

He said Americans were celebrating that "self-evident truth" that "no matter what the colour of our skin or the place of our birth, we are all created equal by God".

If Donald Trump used the word “shitholes” as alleged, will he apologize? Donal trump is yet to accept a fault, even to those he has been caught on camera commiting.

In my opinion, I think AU should leave him alone. Because the US presidency is four years, maximum eight. But I don’t know what you think.