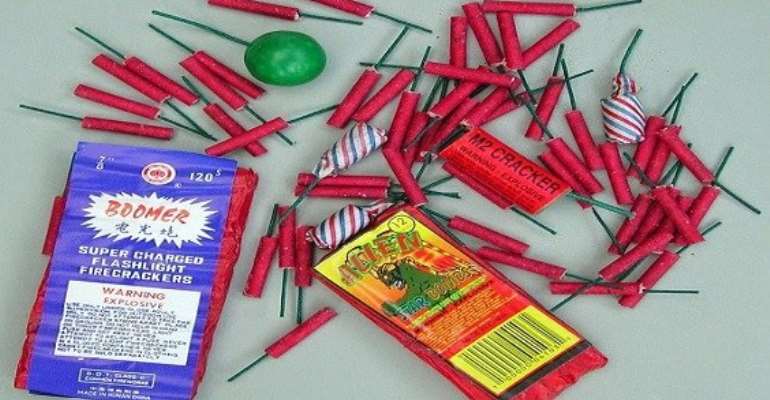 Dear IGP…
Why can't your men enforce the ban on fire crackers?

Each year, your administration sends out public reminders on the ban on importation of fire crackers, accompanied with various threats of prosecution. Invariably, each year the sale of such explosives seems to shore up. I have no official statistics to prove this sir, but a casual walk through the country's markets and street corners will paint a clear picture.

I have actually been wondering where all these crackers come from when a ban has been in place since 2009. And yes, your office never forgets to remind us of it. This year, a statement from your office on this issue read in part, “to ensure strict compliance with this provision [firecrackers prohibition law], personnel who would be deployed for special operations during the festive seasons, would be tasked to arrest any person or group of persons who acts contrary to the instrument, for prosecution”. It went further to implore all persons hoarding the contraband to submit them to the police and avoid arrests.

In 2016, you had then not assumed office yet, but a similar task force was put together to enforce the ban. I am sure you are aware of this. The year before, same announcement (or reminders I should say) came through from the police. This routine goes back to the last 18 years, and needless to say, Sir, without results. But don't you think eighteen years is too long a time for us to be saying the same thing over and for offenders to brazenly break the law?

I dare you and your men to tell us how many people you have arrested since the beginning of December 2017 when the sale of fireworks shot up significantly. You have remained this lax in executing the law, yet, expect people to walk up to you and “coolly” hand over their firecrackers to you? Sorry sir, it stopped working like that.

Please allow me a little leeway Sir. For a long time now, the New Year Day has been just another ordinary day for me and my family. Then mum told us something spectacular happens each December 31st night to usher in the New Year. Curiously, we stayed up late one night to witness this wonder.

Alas! It was nothing spectacular; it was the thunderous sounds of fire crackers from church goers and merry markers, not just at the city’s notable pubs, bars and grills, but at each tiny drinking spot dotted in the nooks and crannies. They unleash into the sky, all sorts of fireworks from crackers our Parliament has long banned. This they do to usher in the new year. Sometimes, this continues for hours.

So sir, my point really is, if your men want to enforce this very law; it is so easy. You won't have to go to neighbourhoods to round up anyone who looks like an armed robber. Traders audaciously display these prohibited crackers in the open. If you and your men are serious about arresting them and enforcing the law, your job is so easily cut out. Arrest the traders. Also, go to the churches, arrest the offenders. If others see our law works, they won't dare break them.

But really, I have tried to comprehend how churchgoers decide to break a country's laws right there at church. Maybe, instead of issuing a generalised public statement, why don't you first write directly to these churches? Then you follow up and ensure the law is strictly adhered to?

Sir, if churchgoers on 31st night step into church without these crackers, you and your administration would made a win that has eluded this country for the last 18 years.

I am tired of running for my life from young children who indiscriminately fire these knockouts. I know I am not the only one. Can you and your men please enforce this law already!

I am a concerned citizen.

If Nana Addo has brought Free SHS, what else can't he do for...
38 minutes ago