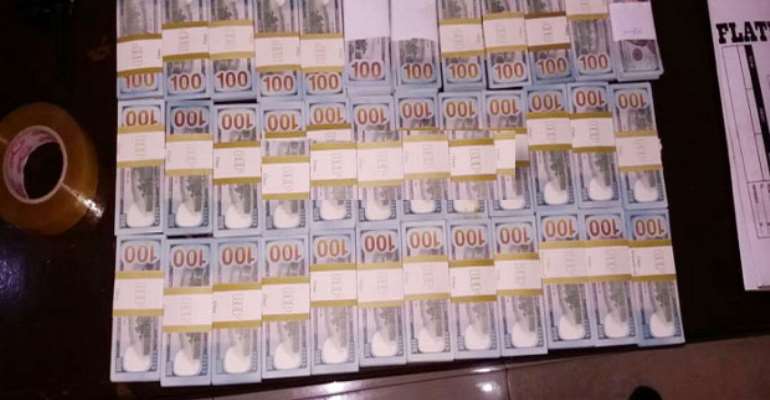 The Customs Division of the Ghana Revenue Authority (GRA) has intercepted fake US dollar notes amounting to $358,000 at Sogakope in the Volta Region.

The fake notes, in $100 denominations, were concealed in a Nigeria-registered commercial Nissan Pathfinder vehicle, with registration number AKD 710 EP.

According to the Assistant Commissioner in charge of the Aflao Border, Mr Frank Cudjoe Ashongthe, parcel containing the fake dollars was discovered in the vehicle, which was travelling on the Accra-Lagos road, about 2.30 p.m. last Monday.

He said when the item was discovered, none of the occupants of the vehicle claimed ownership, for which reason the parcel was seized by Customs officers and sent to its office at Aflao.

Mr Ashong said the vehicle was, however, allowed to continue its journey after the incident.

Verification
He said the notes were sent to the Aflao Branch of the GCB Bank to check on their genuineness, and added that initial checks by the bank revealed that they were all fake.

He said each bundle of dollars had the same serial numbers.

“The driver is known on the road and so anytime we need him to assist us with investigations, we can get him,” Mr Ashong said.

Advice
Commenting further on the matter, the Deputy Commissioner in charge of Preventive at Customs, Mr Seth Dwira, said his outfit had already cautioned the public to be extravigilant when dealing in foreign currencies.

He advised people who transacted business in foreign currencies to always go to the banks or forex bureaux to check on the genuineness of such currencies.

He also warned foreigners who came to the country with fake currencies to desist from the practice, saying they would be arrested and dealt with according to the laws.

“If you want to come to Ghana and have peace of mind, you must comply with our laws,” he said.