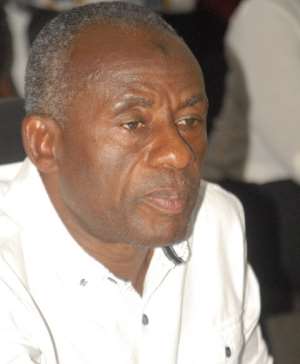 Alhaji Collins Dauda, the NDC Member of Parliament for Asutifi South, has called for a presidential assent on the Zongo Development Fund Bill to ensure the release of budget estimates to the Ministry of Inner Cities and Zongo Development.

Parliament approved an estimated GH¢ 101.90 million out of GH¢ 351.21 million the Ministry required for its operations for the 2018 Financial Year, but Alhaji Dauda, in a contribution to the debate to approve the estimate, said the Ministry would not get the money until the President signed the law.

Parliament, last November, passed the Bill in fulfilment of President Nana Addo Dankwa Akufo-Addo's promise during the December 2016 electioneering to establish the Fund as a way of uplifting the condition of the Zongo communities across the country.

The Ministry was, therefore, established to facilitate a broad-based infrastructure, social and economic development of Inner Cities and Zongo communities within the context of inclusive, resilient, safe human settlements and sustainable development.

The Government promised to provide 50 million dollars for the Fund when established, and a seed amount of GH¢ 219.5 million was budgeted for it under the 2017 Budget.

For 2017, the Ministry was under the Office of Government Machinery (OGM) and as part of the OGM's Budget, an amount of one million Ghana cedis was released to the Ministry for Goods and Services. Actual expenditure for the year amounted to GHC 580 million.

Alhaji Duada said the Ministry was very critical in the development of the Zongo communities but no money had been released because the Bill had not been signed.

The Majority Leader and Minister of Parliamentary Affairs, Mr Osei Kyei-Mensa-Bonsu, in response, said there were long processes before a Bill was assented.

In an answer to a criticism by Mr Richard Acheampong, NDC MP for Bia East, on why the inner city development had only taken off in Madina, Kyebi, and Walewale, Mr Kyei-Mensah-Bonsu said; 'A journey of a 1000 miles begins with the first step.'

Deputy Minority Chief Whip and (NDC) MP for Banda, Ibrahim Ahmed, said the estimates for the Zongo Ministry for 2018 should be released in addition to that of 2017.

Mr Boniface Abubakr Saddique, the Sector Minister, told the House that the GH¢ 291 million seed money was with the Ministry of Finance, adding that the Fund would be deployed in five main areas, namely; Infrastructure and Sanitation, Economic Empowerment, Social Development, Cultural Promotion and Security and Crime Control.

Roads, drains, clinics, water, electricity and street lighting would be provided in relevant communities under infrastructure and sanitation; while women and the youth would be trained in entrepreneurship and employment skills for economic empowerment.

Beneficiaries would also be assisted to draw business plans and be supported to access credit from financial institutions.