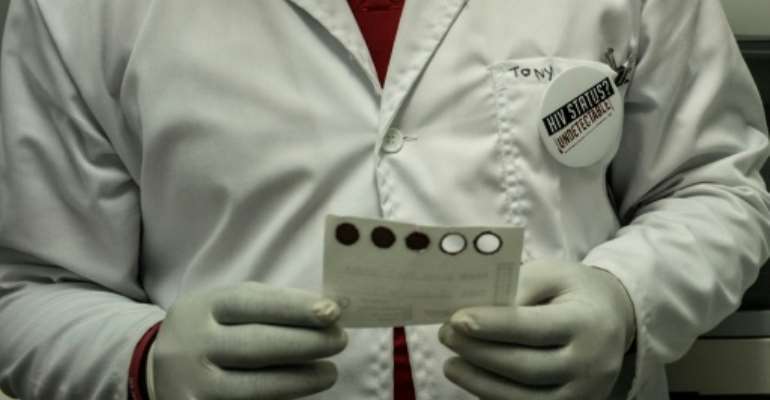 Thirty-five years after the start of the AIDS epidemic, one person in two in sub-Saharan Africa "does not know their HIV status," according to a French expert. By MARCO LONGARI (AFP/File)

Thirty-five years after the start of the AIDS epidemic, one person in two in sub-Saharan Africa "does not know their HIV status," according to a French expert.

Why are screenings a challenge?

"Testing is the cornerstone of our response to AIDS, because once people get tested and are found to be positive, we can refer them to medical care and treatment. If they are negative, (we orient them) towards preventive care," Larmarange said.

"Today, more than one person in two in sub-Saharan Africa, and especially in west and central Africa, does not know their HIV status. We know that in Ivory Coast 40 percent of women and 60 percent of men have never been tested".

"Why the delay? Because west Africa has received less attention than east and southern Africa, where the disease is more pronounced. In west Africa, the outbreak is limited in the general population, with a prevalence of 1-2.5 percent, but more pronounced in high-risk groups -- sex workers, drug users and men who have sex with men. The difficulty is in how to reach those most at risk."

"Several strategies have been implemented in the region, such as community testing to identify the most at-risk groups."

"Depending on the country, we have what is called rapid testing, which is done by pricking the fingertip. It allows screenings on the spot. But community volunteers are not all trained to perform this test."

"Even during specific consultations for sexually transmitted diseases, three quarters of people are not offered these tests. A quarter of women will not be offered testing during prenatal visits, nor two-thirds of men accompanying their wives."

What needs to change?

"We'll have to make screenings accessible through many different methods. We must always agree to voluntary testing, which is lagging today, meaning that when someone wants to get a test done, they can easily obtain one.

"We know we need to improve our approach to testing during medical consultations, maybe tailor them to specific consultations.

"Moreover, we need to strengthen our community activism in populations not easily accessible... New tools, such as the self-test, also need a place in our approach to west and central Africa."

"The self-test can be offered in different ways: through secondary distribution, which means people giving the test to others within their circle as a way to reach hidden populations, such as occasional sex workers and closeted gay men. And through pharmacy distribution, including in rural and remote areas."