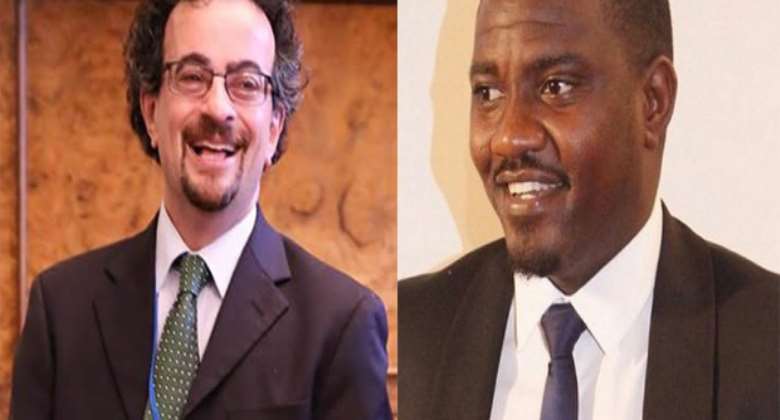 “…Woke up at the Dead Sea, had lunch in Turkey and now landing in London. What a day!” Mr Dumelo had tweeted from Camden Town, London at exactly 1:45am on November 27, 2017.

However, the former High Commissioner, who has been at the actor's throat since the incident, reacted to the tweet by posting “In London? If I see a freshly repainted V8 with its own private siren heading down the Embankment, I'll give you a wave. Enjoy our city.”

His tweet on the actor's twitter handle was in reference to the stolen vehicle, which caused major public embarrassment to Mr Dumelo in March this year after DAILY GUIDE broke the story.

In response to Mr Benjamin's post, the alleged car thief, Mr Dumelo, who seems to have abandoned his boss, ex-President Mahama in the so-called 'Unity Walk' alone, said yep…that's me. I'm picking the Queen up for tea.”

In March this year, a V8 vehicle belonging to the state was retrieved from a spraying shop in Accra, and surprisingly Dumelo was alleged to have transported the vehicle to the mechanics for re-spraying and changing of its details into his name.

Mr. Dumelo earlier told investigators that the vehicle was given to him by the former First Lady, Lordina Mahama but later made a U-turn.