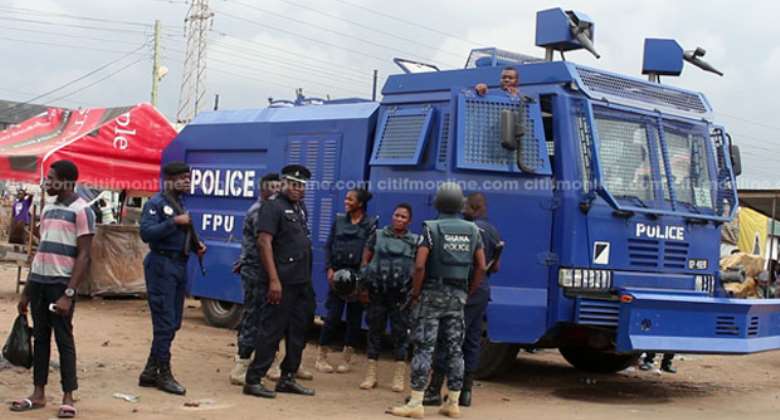 Residents of Hweehwee and Oboyan in the Kwahu East District of the Eastern region have clashed with Fulani nomads with some sustaining severe injuries.

The incident occurred at about 5:30 pm Tuesday.
About 300 rampaging youth attacked and attempted to lynch two Fulani herdsmen by name Fuseini Adama, 32 and Adama Sadibe, 38, who were on a motorbike returning from Sempoa heading towards Nkawkaw.

Fortunately, a Police Patrol team was returning from the Sempoa area and encountered the mob.

The Patrol Team in their quest to save the two Fulani herdsmen from the mob were strongly resisted by the irate youth.

A re-enforcement team led by Operation Save Life and two other Teams quickly proceeded to the scene to rescue the victims.

The operation teams had a hectic time in controlling the situation as the rampaging youth rather vented their anger on the Police and poured a painfully, itching herbal powder known locally as “apia” on them.

They also mounted road blocks to prevent the Police from moving away.

The DCE and the Assembly man for the area were contacted on phone to talk to the opinion leaders in the town to calm the situation.

One Fulani herdsman who sustained serious injuries has been hospitalized at the Holy Family Hospital at Nkawkaw.

The Public Relations Officer of the Eastern Regional Police Command, ASP Ebenezer Tetteh, told EIB's Agoo FM in Nkawkaw that, the Locals must desist from taken the laws into their own hands and must cooperate with the Police instead of attacking them to help deal with the menace.

He said, the Police will defend itself should they feel threatened in any circumstance.

ASP Ebenezer Tetteh said, Police personnel dispatched to the affected communities are there to maintain Law and Order without taking sides therefore should not expect the Police to fight against Fulani herdsmen who have not been caught committing any crime.

The renewed clashes in the area has led to the death of 10 persons, at least four have suffered gunshots wounds and 163 displaced in 12 communities.

85 Armed Police Personnel have since been dispatched to the community to maintain law and order.