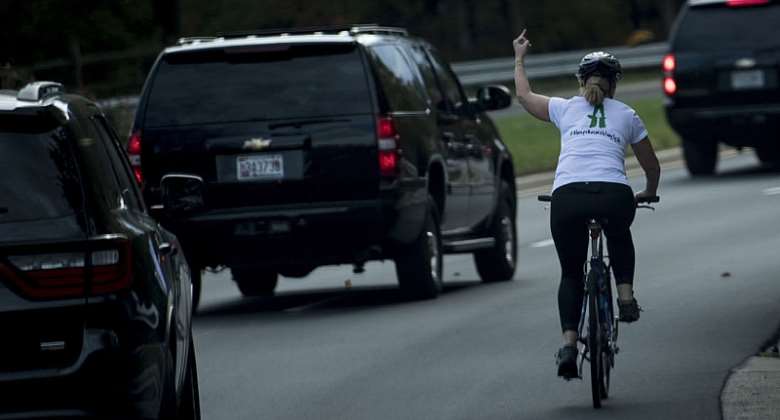 A woman has been sacked from her job after a photo of her raising a middle finger at President Trump went viral.

Juli Briskman, 50, was cycling past the Trump National Golf Club in Sterling, Virginia, when she noticed a motorcade carrying the President and realised it was an opportunity she could not miss.

Lifting her left arm, Ms Briskman gave Mr Trump the finger and was snapped by a photographer travelling in the motorcade.

The image was widely shared across social media and featured prominently on late-night comedy shows, but it has resulted in Ms

Briskman losing her marketing and communications job with Akima – a government contractor.

After deciding to notify Akima’s HR department what had happened, Ms Briskman was called into a meeting and reportedly told she had broken the company’s social media policy by using the image as her profile picture on Twitter and Facebook.

“They said: ‘We’re separating from you,'” the single mother told HuffPost.

“Basically, you cannot have ‘lewd’ or ‘obscene’ things in your social media. So they were calling flipping him off ‘obscene’.”

Ms Briskman said she pointed out that her social media accounts were personal and did not state where she worked, but was told that it could affect business.

Despite her dismissal, the Democrat supporter said she did not regret her show of defiance.

“In some ways, I’m doing better than ever,” she said. “I’m angry about where our country is right now. I am appalled. This was an opportunity for me to say something.”

On why she decided to make the gesture, Ms Briskman said: “He was passing by and my blood just started to boil.

“I’m thinking DACA (Deferred Action for Childhood Arrivals) recipients are getting kicked out. He pulled ads for open enrolment in Obamacare.

“Only one third of Puerto Rico has power. I’m thinking, he’s at the damn golf course again.

“I flipped off the motorcade a number of times.”

The White House pool report from 28 October confirms this, stating that as the motorcade passed Ms Briskman she “responded by giving the middle finger”.

It adds: “The motorcade had to slow and the cyclist caught up, still offering the finger, before turning off in a different direction.”

The tigers have been declawed, they're no longer dangerous –...
9 minutes ago