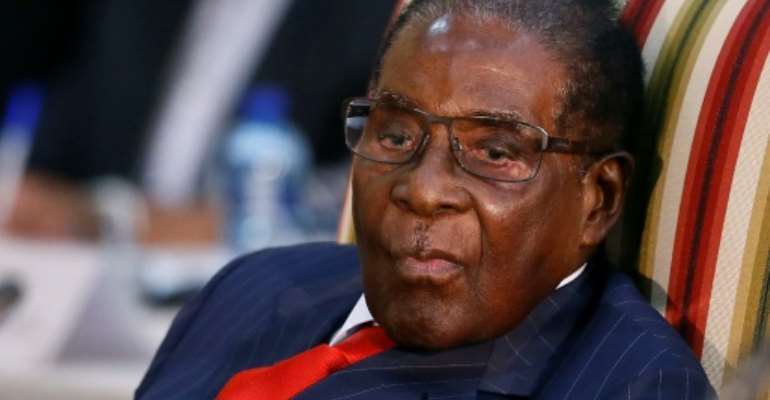 The naming of Zimbabwean President Robert Mugabe as a goodwill ambassador for the World Health Organization has triggered widespread outrage. By Phill Magakoe (AFP/File)

"Over the last few days, I have reflected on my appointment of H.E. President Robert Mugabe as WHO Goodwill Ambassador for (Non-communicable diseases) in Africa. As a result I have decided to rescind the appointment" the head of the UN agency, Tedros Adhanom Ghebreyesus, said in a statement.

Tedros, who took charge of WHO in July, said he had "listened carefully" to those who condemned the decision and spoken to the Harare government.

"We have concluded that this decision is in the best interests of the World Health Organization."

Tedros had announced the appointment earlier this week during a speech in Uruguay, where he praised Zimbabwe as "a country that places universal health coverage and health promotion at the centre of its policies to provide health care to all".

But activists, public health experts and key WHO donors like Britain, Canada and the United States swiftly denounced any prospective role for Mugabe, saying Zimbabwe's healthcare system has collapsed under his 37 years of authoritarian rule.

Tedros said on Sunday his goal was "to build political leadership and create unity around bringing health to all."

The WHO boss had faced mounting pressure to reverse the decision, including from some of the leading voices in global public health.

"The Mugabe appointment, coming at the end of (Tedros's) first 100 days, was a misstep," the director of the Global Health Institute at Harvard University, Ashish K. Jha, told AFP in an email shortly before the WHO decision was announced.

"Reversing will actually be a strong sign that the leadership listens and is willing to be responsive to views of the global public," he added.

The US ambassador to the United Nations during Barack Obama's administration, Samantha Power, tweeted: "Tedros will surely revoke terrible apptmt of Mugabe as goodwill ambassador, but damage is done.

"The only person whose health 93-yo Mugabe has looked out for in his 37 year reign is his own."

Multiple critics noted that Mugabe, who is 93 and in increasingly fragile health, travels abroad for medical care because Zimbabwe's health care system has been so severely decimated.

Richard Horton, the editor of the leading medical journal The Lancet said: "WHO DG stands for Director-General, not Dictator-General. Tedros, my friend, retract your decision, consult with colleagues, and rethink."

Tedros is the former health minister of Ethiopia.

His election as the first African leader of WHO was billed as a key moment for the continent, where much of organisation's work is based.

But his decision to honour one of Africa's most controversial leaders has raised questions about his leadership just four months into his tenure.