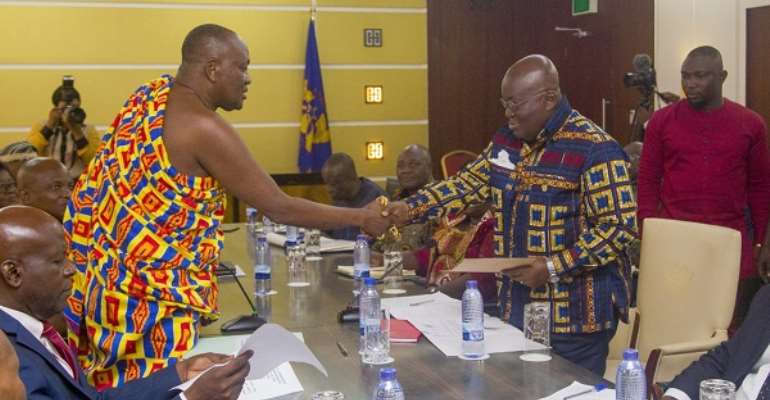 It is typical of our nation's political class that exactly a day after the president inaugurated a bleeding-edge, digitised national addressing system, our country is then made to take ten steps backwards.

What is the point of creating more regions in Ghana - and add yet more bureaucratic inertia to a notoriously corrupt and creaking system that stifles private initiative and burdens hapless taxpayers: who will be called upon to shoulder the overly-generous compensation packages of even more government ministers and upper-echelon officials of our profligate public-sector who advise them? Ebeeii.

What is needed, if we are to successfully transform our nation into a prosperous society, is dynamism at the grassroots level - driven by competitive district-level elections to select local government leaders democratically. Haaba.

That is how best to ensure that meeting the needs of grassroots people underpins governance at that level - through free and fair elections in which political parties compete for the election of their candidates to be metropolitan, municipal and district chief executives.

Ditto get political parties to compete to elect assembly members - who will work in oversight committees to monitor elected chief executives' performance and sanction them whenever necessary: thus ensuring accountability and transparency during their tenures in office.

Just who are we fooling with this nonsense about creating more regions being such a good idea, I ask? The question is: Is the best way of meeting the needs of Ghanaians at the grassroots-level, democratically, not simply to empower them to directly elect metropolitan, municipal and district chief executives? Ditto members of Netropolitan, Municipal and District Assemblies? Hmm, Oman Ghana - eyeasem o: asem kesie ebeba debi ankasa.

It is such a pity that rather than working towards that end, the president has rather gone ahead to inaugurate a committee of the great and good in Ghanaian society - to take public soundings on a foolish and retrogressive idea that is wasteful of taxpayers' money: and cloaks a hidden ethnocentric agenda of the diehard tribal-supremacists in Ghana's political world.

The plain truth is that we don't need yet more regions to bring development to people at the grassroots-level. What we need is to elect metropolitan, municipal and district chief executives democratically. Period.

Creating yet more regions in Ghana does not make sense. It is pandering to ethnocentrism in our country. Let us elect local leaders to run metropolitan, municipal and district chief executives instead.

Conflict 'behind us', Ivory Coast's Ouattara says after gree...
8 minutes ago