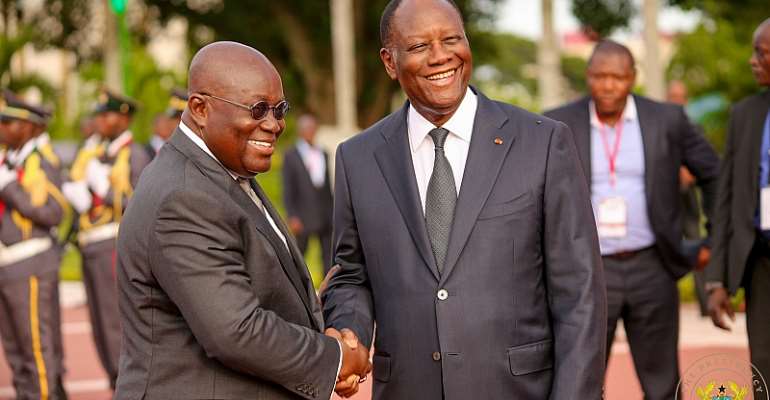 President Akufo-Addo has said the recent judgment of the International Tribunal of the Law of the Sea (ITLOS), over Ghana and Ivory Coast's maritime border dispute, has strengthened the relationship between the two countries.

This according to him, is contrary to suggestions that the ruling would mar diplomatic ties between Ghana and her western neighbor.

Akufo-Addo was speaking at the Flagstaff House on Monday, when he hosted the Ivorian President, Alassane Ouattara.

“We realized those delicate moments when it came to this dispute over our maritime border, but your statesmanship and your friendship and regard for the interest of our two countries made it possible for us to overcome that delicate moment and use it as a basis for forging even stronger relations between us,” Nana Addo said.

“A lot of work has been done here of technical nature which is important, but at the end of the day, the will and desire to translate the technical and paper works into the concrete decision and affect the lives of our people, for me, that is what is most important,” he added.

President Ouattara, who is on a two-day stay in Ghana at the invitation of President Akufo-Addo, thanked him for the invite and the warm reception.

He said the reception was an indication of the cordial relationship that existed between his country and Ghana.

He called for collaboration between the two countries, noting that both could collaborate in various sectors including agriculture and transport.

The judgement
The Chamber in a unanimous decision on Saturday September 23, 2017, ruled that there has not been any violation on the part of Ghana on Côte d'Ivoire's maritime boundary.

Justice Boualem Bouguetaia, President of the Special Chamber in reading the judgment, accepted Ghana's argument of adoption of the equidistance method of delineation of the maritime boundary.

In consideration of the new boundary, the Chamber determined that it starts from boundary 55 -200 nautical miles away, a position much closer to what Ghana was arguing for.

Background
In 2014, Ghana took the case to ITLOS to dispel claims it has encroached Cote d'Ivoire's marine borders as part of oil exploration activities at Cape Three Points, off the shores of the Western Region.

Ghana's defense held that Cote d'Ivoire was barred from demanding ownership to the disputed area it had acknowledged that Ghana owned the space without any qualms in the decades leading up to the oil discovery.

The oral hearings for the dispute were concluded in February 2017.

Ghana's oil discovery
In 2007, Ghana discovered oil and gas in commercial quantities, and this was followed by Cote d'Ivoire staking its claim to portions of the West Cape Three Points.

These claims were renewed in 2010 after Vanco, an oil exploration and production company announced the discovery of oil in the Dzata-1 deepwater-well.

Cote d'Ivoire petitioned the United Nations asking for a completion of the demarcation of its maritime boundary with Ghana, and Ghana responded by setting up of the Ghana Boundary Commission.

This commission was tasked with the responsibility of negotiating with Côte d'Ivoire towards finding a lasting solution to the problem.

But this commission bore no fruit, and in September 2014, Ghana dragged Cote d'Ivoire to ITLOS after 10 failed negotiations.

ITLOS's first ruling in 2015 placed a moratorium on new projects, with old projects continuing after Cote d'Ivoire filed for preliminary measures and urged the tribunal to suspend all activities on the disputed area until the definitive determination of the case.