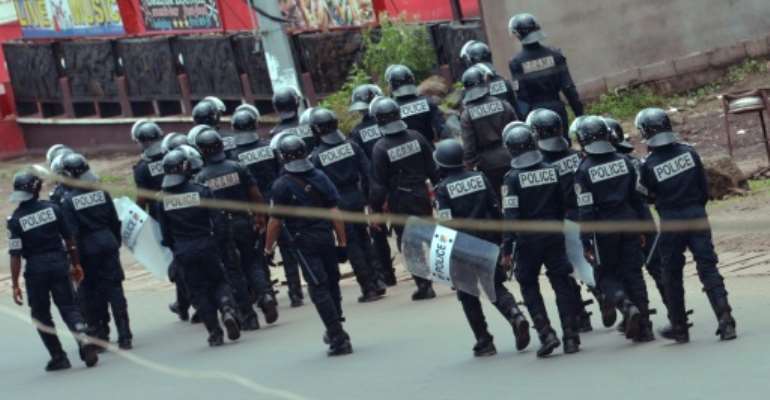 Cameroon police officials walk with riot shields on a street in the administrative quarter of Buea some 60kms west of Douala on October 1, 2017. By STR (AFP/File)

YaoundÃ© (AFP) - Catholic bishops have denounced the "barbarism" and "irresponsible use" of force against demonstrators in Cameroon's English-speaking regions last weekend, which left at least 19 people dead.

The clashes occurred as separatists leaders in the regions made a symbolic declaration of independence, saying the Anglophone minority has suffered decades of economic inequality and social injustice at the hands of the French-speaking majority.

"We condemn in the strongest terms possible the barbarism and the irresponsible use of firearms against unarmed civilians by the forces of law and order, even if they are provoked," the bishops of the Bamenda Provincial Episcopal Conference said in a statement obtained by AFP on Friday.

Fourteen died in clashes with security forces over the weekend, and five prisoners were shot by guards in an attempted jail break at Kumbo, according to an AFP toll.

Some worshippers were tear gassed while leaving mass, while others were "arrested, some maimed and some (including defenceless teenagers and elderly persons) were simply shot to death, some from helicopters," they said.

"In Bamesing, in the archdiocese of Bamenda, some young men were caught and shot on the legs," they added, adding that many pweople were arrested and "taken away to where we do not know."

The government has claimed its forces acted in self-defence after imposing a curfew on the regions.

UN Secretary-General Antonio Guterres and Amnesty International have called on Cameroon to investigate the fatalities.

The bishops called on the government of President Paul Biya to release all who have been detained, and for "honest and meaningful dialogue" to end the crisis.

Cameroon's anglophone-francophone rift dates back to 1961, when the British-administered Southern Cameroons united with Cameroon after its independence from France in 1960.