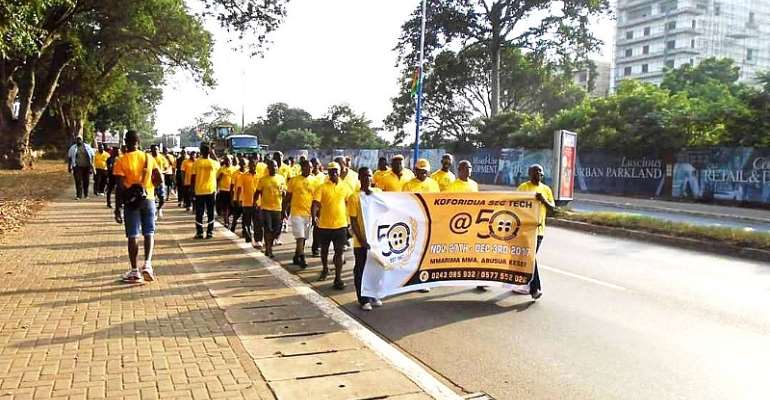 Koforidua Sectech celebrates its golden jubilee this year from 27th November - 3rd December 2017 in Koforidua. To culminate the celebrations characterized by many preceding events, the old students association of the school embarked on a health walk dubbed Mmarima Mma Golden Jubilee Walk.

This was the third time the old students association is organising such walk but this year's own which happens to be the maiden event towards the 50th anniversary will go down in the annals of our history as the biggest ever to be organised by an alumni.

It is a known fact that Koforidua Sectech is not situated in Greater Accra, however, on the 21st of September 2017, they painted the main streets of Accra yellow and black.

The walk commenced from El Wak sports stadium through 37 round about to Ako -Adjei interchange then straight down to Kwame Nkrumah circle.

The day being a public holiday, had other organisations embarked on similar walk, however, Sectech stole the show and owns the bragging right to marshal over 1000 old students supported by representatives from Krobo Old Girls Association and Sutesco Old Students Association.

They covered 12.93km with 3 hrs 6 minutes.
They ended the walk at El-Wak stadium with a health screening exercise.

The president of the alumni Scofray Nana Yaw Yeboah and his organizers could not hide their joy for the success of their event. He seized the occasion to share with media houses present, to reach out to other members of the alumni sitting on the fence to join forces with them to support the school.

Again, he encouraged members to contribute towards their flagship project dubbed MPAH - Multi Purpose Assembly Hall which after completion it will be the biggest of its kind in West Africa for any second cycle institution which can host up to about four thousand (4,000) people. It can be used to host many indoor sporting events aside conferences, trainings & seminars, camps, theatre etc. 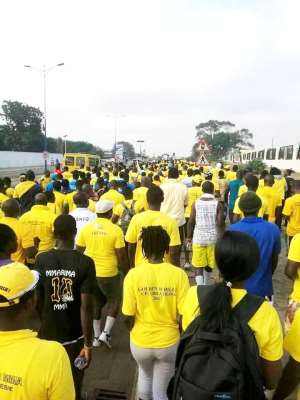 He expressed his gratitude to the organisers, alumni members, sponsors, Krobo Old Girls Association, Suhum Sectech Old Students Association and the school for the yo man's job.