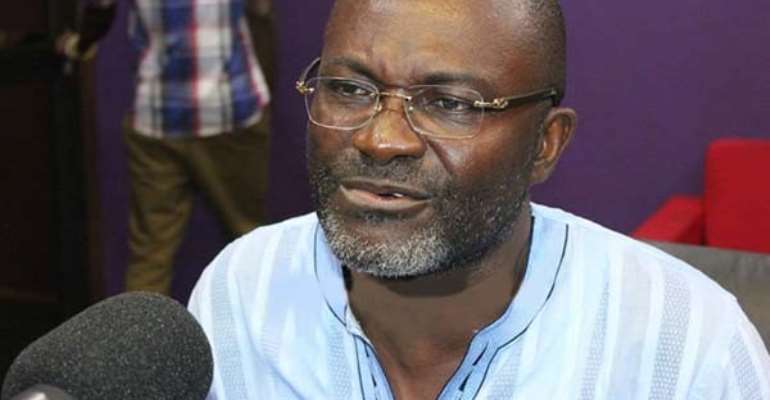 Of course, the unrepentant critics of the Honourable Kennedy Agyapong have the right to ventilate their arousing disgust over the caption of this article.

However, my humble advice to the fault-finding bandwagon is: there is no perfect human being on this planet.

Indeed, we are all susceptible to human foibles or have defects in our characters, so why must we hastily pass judgement on others attitudes and behaviours?

The fact that the Honourable Kennedy Agyapong sometimes goes overboard in his attempt to expose the nation wreckers does not make him a bad person or “a Lucifer in the flesh”.

If anything at all, the man is a certified valiant patriot, who has time and time again, shown his affection, solicitude and strong predilection towards the wellbeing of Ghana.

I must confess, though, it is because of courageous and patriotic individuals like the Honourable Kennedy Agyapong that I refuse to buy President Obama’s assertion that Africa needs strong institutions, but not strong men.

To me, Obama’s observation is specious. Yes, Africa needs strong institutions, but then again, Africa cannot do away with ‘strong men’ like the Honourable Kennedy Agyapong in our attempt to strengthen the ever so redundant institutions.

Truly, the Honourable Agyapong is an unwearied corruption crusader who has consistently upheld the relevant provisions of the United Nations 2005 Convention against Corruption. He has inexorably exposed corrupt public officials, so to speak.

But for the Honourable Agyapong’s whistling blowing prowess, the GH51.2million dubious judgment debt payment to Woyome would have been swept under the carpet by the conspiratorial plotters.

Take, for example, more recently, he came out and told Ghanaians that former President Mahama’s brother, Ibrahim Mahama, has been evading import taxes over the past few years.

He was however scoffed at, and queried repeatedly about the veracity of the seeming chilling story. But alas, he has been proven right.

Apparently, the EOCO has ordered Ibrahim Mahama to pay GH12.7million, as all his previous 44 cheques were dishonoured by the respective banks. How bizarre?

The Honourable Kennedy Agyapong, like some of us, cannot comprehend why the people we have entrusted with the national coffers could team up with shifty individuals and steal gargantuan sums of money belonging to the nation.

Despite the fact that corruption is a serious economic, social, political and moral impediment to the nation building, some corrupt officials are bent on siphoning our scarce resources to the detriment of the poor.

As a matter of fact and observation, corruption impedes economic development by distorting markets and collapsing private sector integrity.

“Corruption also strikes at the heart of democracy by corroding rule of law, democratic institutions and public trust in leaders. For the poor, women and minorities, corruption means even less access to jobs, justice or any fair and equal opportunity” (UNDP 2016).

What exactly is corruption?
“Corruption is the misuse of public power (by elected politician or appointed civil servant) for private gain.

“Corruption is the misuse of entrusted power (by heritage, education, marriage, election, appointment or whatever else) for private gain”.

How are “offering”, “promising” and “giving” a bribe treated under the law?

In fact, different countries have different responses to these questions, by definition as well as interpretation.

In some jurisdictions, for instance, the courts may consider an oral offer of a bribe not as attempted bribery, unless the bribe giver takes further steps. An OECD report, however, suggests that broad definitions of corruption may be one reason why prosecutions are so low.

Apparently, the OECD, the Council of Europe and the UN conventions do not explicitly define “corruption”, but have established a range of corrupt offences.

For example, the OECD Convention acknowledges the offence of bribery of foreign public officials, while the Council of Europe adds trading in influence and bribing domestic public officials as well.

Besides, the UN Convention covers embezzlement, misappropriation of property and obstruction of justice.

The OECD glossary however notes that international definitions of corruption for policy purposes are common, and cites “abuse of public or private office for personal gain” as a useful example for policy development” (OECD 2007).

In fact, in terms of meanings, favouritism, nepotism and cronyism are all involved abuses of discretion.

Even though some countries do not criminalise the conduct, Article 7 of the UN Convention against Corruption covers merit selection without even mentioning nepotism.

In a way, the associated violations usually involve not a direct personal benefit to an official, but promote the interests of those related to the official, whether through family, political party, tribe, or religious group.

In fact, a fantastically corrupt official who persistently hires a relative (nepotism) or a friend (cronyism), does so, in exchange, not often of a bribe, but of the less tangible benefit of advancing the interests of others connected to the official.

And more so the unlawful favouring of - or discrimination against - individuals can be based on a wide range of group characteristics: tribe, religion, geographical factors, political or as well as personal or organizational relationships, such as friendship or shared membership of clubs or associations.

To me, a fantastically corrupt public servant is no less a human rights violator than the enigmatic Adolf Hitler.

Whilst Adolf Hitler went into a conniption fit and savagely exterminated innocent people with lethal chemicals and sophisticated weapons, a contemporary corrupt public servant is blissfully bent on annihilating innocent citizens through wanton bribery and corruption.

Consequently, the innocent citizens would often end up experiencing economic hardships, starvation, depression, emotional labour and squalor which send them to their early grave.

It would, however, appear that the political criminals have the licence to steal. For, if that was not the case, how come the offending politicians and their minions often go scot free?

Let us admit it, though, the traditional exemption of heads of state from prosecution despite the evidence of a case to answer is wrong, so to speak.

In any case, the all-important question the discerning Ghanaians should ask is: will the day come when “Ghana’s political criminals” find they have nowhere to hide?

To me, Ghana’s 1992 Constitution has to be reviewed and the irrational and inexpedient clauses such as the indemnity clause are expunged and tossed into the dust bin accordingly.

How on earth can individuals commit unpardonable crimes (gargantuan sleaze and corruptions) against the state and get away with their misdeeds?

And how serious are we as a nation when we can only descend heavily on goat, cassava and plantain thieves and let go hard criminals who persistently dip their hands into the national coffers?

Well, some of us will continue to hold the fearless patriots like the Honourable Kennedy Agyapong in high esteem, for putting their precious lives on the line to trail and expose the enemies of the state.