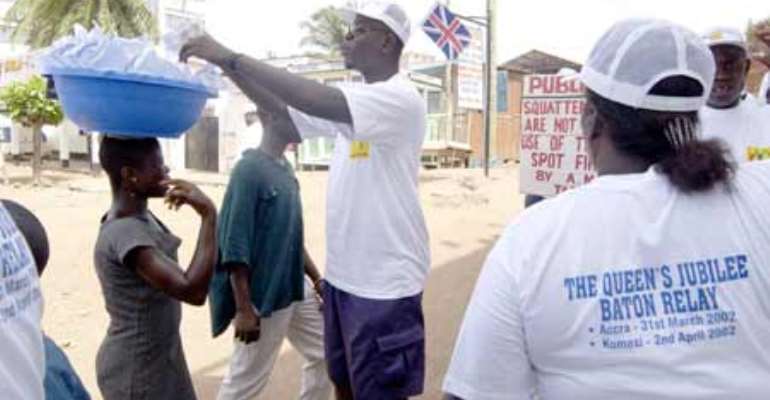 Accra, April 26, GNA - The Accra Metropolitan Assembly (AMA) has resolved to temporarily ban the manufacture and sale of sachet water and all forms of plastic bags in the City with effect from June 1 this year. Mr. Stanley Nii Adjiri Blankson, AMA Chief Executive Officer announced on Tuesday that the Assembly unanimously took the decision at the its last sitting.

Addressing a press conference in Accra, Mr Blankson said, it would be an offence to possess those items or to be seen in a factory, warehouse or in a shop, adding, "it shall be punishable by prison sentence or a fine as stipulated by law."

The Chief Executive Officer said all the 13 Sub-Metros in the Metropolis would also enforce the ban.

"However, the handlers have a choice to produce an alternative material, which could be confirmed as bio-degradable," he declared. On other plastic waste such as plastic pipes, buckets and others, the Mayor of Accra said the Assembly would deal with them as well very soon.

He said the AMA was going to employ 50 labourers in each of the Sub-Metros to clear the left over filth from sachets and plastic bags. He, therefore, appealed to Spiritual Leaders, the Ga Traditional Council, Politicians, the Judiciary and Security Agencies to support the AMA to effectively control plastic waste in the Metropolis by educating the people on the menace.

Mr Blankson explained that all efforts by the AMA to reach an "understanding" with the National Association of Sachet Water Producers (NASWAP) for months had not been fruitful.

He noted that the Executives of NASWAP in a dialogue with AMA refused to contribute the 17 per cent of the 2.3 billion cedis that the Assembly spent on removing over 1,800 tonnes of garbage produced daily. He said NASWAP had also been giving excuses that it had 50 active members from over 1,500 members in the country and were, therefore, providing jobs.

"But the AMA regards that excuse as an attempt to throw dust into the eyes of the citizenry saying the Assembly had exhausted its patience. He said a more serious development was the suspicion that some of the materials used to produce sachet water bags actually contained "carcinogens, which can cause infertility and cancer," adding, however, "until this is confirmed, we would proceed with caution."

Mr Blankson said the Assembly was not targeting any person but was waging a war on the filth in the Metropolis.

He recounted that the Assembly spent over 500 million cedis to de-silt a portion of the Odaw Canal stressing that this time the AMA could not afford to do that.

Mr Blankson said the use of plastic bags had been banned in South Africa adding that Ghana could also do likewise, "we can't allow a few people to hold the nation to ransom".

Meanwhile, Mr Kwame Adjapong Ntrah, Public Relations Officer of NASWAP told Journalists that he was surprised at AMA's stand saying the Association would react on Wednesday.