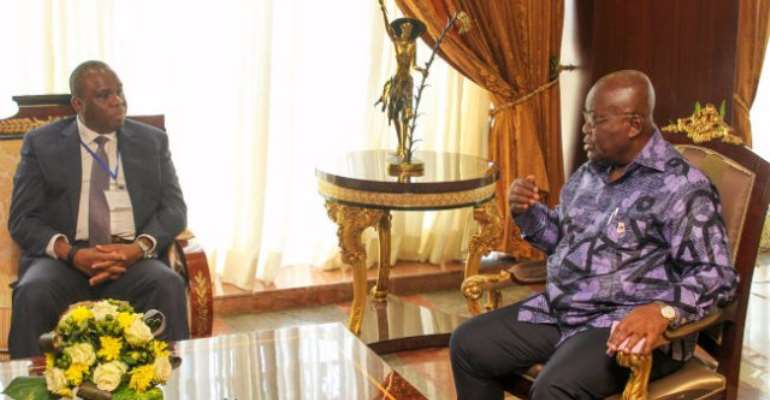 The President and Chairman of the Board of AfriExim Bank has pledged the bank's support to the vision of a value-addition and industrialised Ghanaian economy, being embarked upon by President Nana Akufo-Addo.

Dr. Benedict Okey Oramah said raw material producing economies do not create prosperity for the masses, explaining that the only way to the goal of ensuring access to prosperity in Africa is through the industrial development of their economies.

He was, thus, pleased with Ghana’s drive, under the leadership of President Akufo-Addo, towards becoming an industrialised country and has assured government of the full support of the AfriExim bank towards the realization of this vision.

Dr. Okey Oramah made this known on Thursday when he paid a courtesy call on President Akufo-Addo, at the Presidency, to acquaint him with the workings of the bank, as well as find out the priorities areas of the Akufo-Addo government and “see where we will be of support.”

The Chairman of the Bank told President Akufo-Addo that the AfriExim Bank is an “African Trade Finance Bank, which was established by African governments in 1993, under the auspices of the African Development Bank.

"The authorized share capital of the Bank is five billion United States dollars (US$5 billion), and was set up to promote and finance intra and extra Africa trade, provide trade financing, guarantees, and also trade information and advisory services.”

With the bank being a strong supporter of agro-processing activities, Dr. Oramah bemoaned the fact, although Africa produces 80 percent of the world’s cocoa, a paltry 17 percent of cocoa is processed here on the continent. This, he added, has resulted in Africa earning only $12 billion out of the $120 billion cocoa industry. 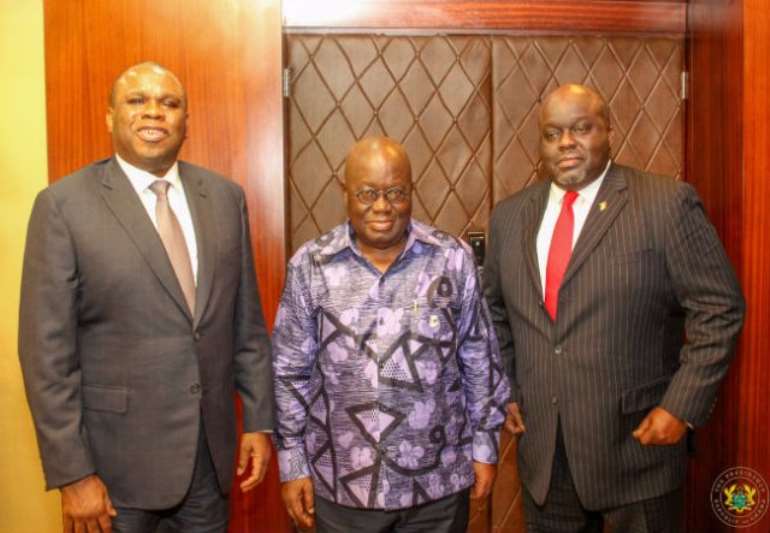 He assured President Akufo-Addo that “we want to repeat what we did for Cote d’Ivoire here in Ghana”, and, to this end, he stated that consultative meetings have been held with the Ministries of Finance, Energy and Agriculture.

With the cost of light manufacturing increasing in China, Dr. Oramah revealed that Chinese manufacturing companies are seeking to relocate their businesses to Africa. It is for this reason that $1 billion has been given to the AfriExim bank by Chinese firms “to help set up capacities in Africa for the relocation of the factories.”

President Akufo-Addo noted that “everything you have said has a big resonance for me because they touch on the critical areas of our government.”

He told Dr. Oramah and the delegation from the AfriExim bank that his government inherited an economy in decline, with some major challenges in some critical areas, especially in the energy sector, which has a $2.4 billion debt overhang.

Ghana, he added, had also slipped in her capacity to produce cocoa in recent years, coupled with a decline in manufacturing and industrial activity.

“We have made the decision that the way forward is to clean up the business environment, not just in the area of regulation but also of policy, i.e. doing something about the high interest rates, the stability of our currency and tackling the major issue of corruption in our country.

Thus, “to hear a bank which is interested in helping us to deal with these critical areas of our national economy, especially an African institution, like yours, is great. Our programme fits so easily with the intentions of the bank.”

“We cannot continue to be a raw material producing and exporting country. There is no future in that for our country or for anybody else on this continent. If, today, there is an opportunity to replace the Asians as a source of manufacturing activity, then we should grab it with both hands, for all the obvious consequences it has for the future of our people," he added

President Akufo-Addo assured Dr. Oramah and the delegation of the AfriExim Bank of the full support and co-operation of his government towards the realization of the vision to industrialise the country.

Election 2020: You'll have ‘fugitive’ president should Maham...
57 minutes ago