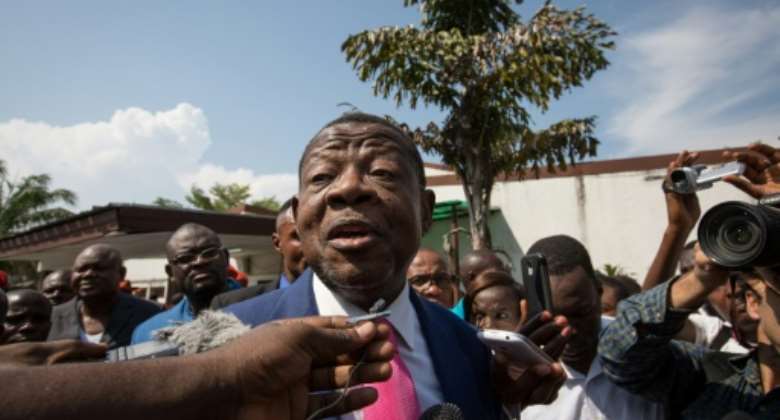 Government spokesman Lambert Mende (C) likened a video purporting to show a massacre of unarmed civilians by DR Congo soldiers to "scenes from a Rambo movie". By FEDERICO SCOPPA (AFP/File)

Kinshasa (AFP) - A Democratic Republic of Congo spokesman condemned as a "ridiculous montage" Saturday a video purporting to show a massacre of unarmed civilians by DR Congo soldiers (FARDC).

But confusion reigned after a later government statement referred to possible "excesses and abuse" by soldiers, two of whom it said were on trial for unspecified charges.

The seven-minute video, which appears to be taken by cellphone, was provided to AFP late Friday by a Congo specialist, who said it might have been filmed on February 11 or 12.

"What kind of army would let someone film while they kill?" said government spokesman Lambert Mende.

"This is the work of desperate people. It's clumsy and ridiculous. It's worthy of scenes from a Rambo movie," he said.

But just hours after Mende's comments, a government statement said there had indeed been clashes, in December, in the village of Mwanza Lomba, which the video purported to show, between a troop patrol and the "terrorist group" Kamwina Nsapu as well as "other armed assailants".

The government statement added: "Any excesses and abuse signalled (ascribed to) elements of the FARDC in this operation" had been "taken into account in accordance with the military penal code at the end of this operation last year.

According to the statement, two soldiers, including an officer, "are already facing military justice" without specifying the charges against them.

A spokesman for the UN mission for the stabilisation of the country, MONUSCO, could not be reached Saturday, but a source in the mission said it was investigating "the video and other claims" regarding operations in the Kasai regions.

Unconfirmed reports have indicated that 50 to 100 people had been killed in clashes between government forces and supporters of a slain tribal chief in the Kasai-Central region in the south of the country.

An AFP analysis was unable to confirm when or where the video was made.

It shows a group of eight soldiers speaking Lingala, the language used by Congo's army, and Swahili, spoken in the east of the country.

The soldiers advance on a group of people a few dozen metres away who are singing "Our land, our land" in Tshiluba, a language of Kasai-Central.

"These bastards, they're coming to get killed", one can be heard saying, and then an order is shouted: "Advance! Shoot!"

The soldiers begin firing, without any attempt to find shelter: Nobody is seen shooting back.

The shooting stops, and the video shows the soldiers amid the bodies littering the ground. They fire at some to finish them off, starting with a woman.

As the camera lingers on one victim in his death throes, a man says, "you're dying for nothing, for nothing."

The person narrating the film earlier set the scene.

"Here we are in the village of Mwanza-Lomba, we came across them today. We have shown them that power is the law.

"There are lots of them but we'll chase them to infinity, he said.

"Look at them, they're armed with slingshots, wear red scarves around their heads; they have grisgris on their belts," he says, referring to amulets associated with voodoo.

The region has been wracked by violence since a tribal chief, Kamwina Nsapu, was killed by government forces in mid-August.

More than two dozen people have been killed in the area since the start of the year, and the United Nations mission in the country has said it will send at least 100 peacekeepers to the Kasai-Central region.