Donald, Uncle Sam and the rest of us 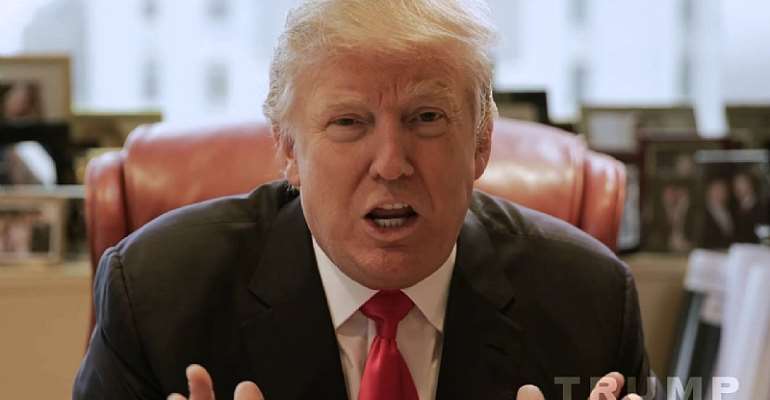 Eventually seventy years old Donald John Trump is undoubtedly the President of the United States of America. No calls for vote recounting or blame on the Electoral College system, or indeed an accusation of a Putin-induced Russian cyber infiltration stopped the son of a German migrant and a Scottish maid from taking that solemn oath of office. His is the forty-fifth Presidency and comes immediately after the historic first black President. So whether his Whitehouse continues his spectacular tweets, even having time to argue the numbers present at his inauguration, or the media floods the headlines with sneezes of cynicism that can make the world catch cold, reality has dawned on everybody: the American narrative has turned another interesting page with a single man who has more than succeeded in calling global attention to himself; needing no further publicity by the Don’s Johns label on the rented mobile toilets the White got for the inauguration

When the election campaigns started, few gave Donald a dog’s chance. He didn’t even seem to be giving himself a chance. Dozens of blasting speeches blistered the trail of his campaign team with irrecoverable staff because the man behind the steer would neither hearken to counsel nor forgive a jab. In-house competitors like Marco Rubio, Jeff Bush and even Ben Carlson who he now nominates as part of his cabinet were referred to as “little Marco” and low energy guys. He rode upon the wild horse of an anti-establishment outsider, scaling the hurdles with a sprint which made a flash out of a marathon. That’s how when he hinted ill-health upon “crooked” Hillary, the latter’s pneumonia episode helped glue her feet at ground zero, with further support from the alleged Moscow-catalysed leaky Wikki! He rattled the GOP (Grand Old Party,) facing up with the meticulous Paul Ryan until the chief’s decorum was tested. Mit Romney didn’t quite pass a similar trial. Donald seemed to have created a dilemma-causing dichotomy which saw only a few Party stalwarts like Gingrich on his side. Yet, it was the Republican Party which eventually had to succumb to maintain unity. Of course there were compromises from both sides to escape Obama’s temptation to massively disown D.J. Trump. Obama has alluded to confessions of their complacency resulting from the overconfidence which lowered the guard and kept the glass ceiling intact. The Dems failed to cry back wolf, made light of the assertion of a possibility of rigging; and cannot now play the victim. Trump trampling has triumphed. May be that’s the kind of tactics America is perceived of using on the global front.

Was Uncle Sam outwitted by Donald and his friends? Poll after poll, until what some read as a mischievous move by the FBI chief, America was going for the better of two unwanted proposals: the head of a basket of deplorables and a polished cupboard of skeletons. The Comey effect, as Vox called it, is seen by some as having critically turned border-line skeptics who would have given Clinton what they knew could be a dangerous benefit of the doubt or the better-than-Trump option, into active cynics and kept much of the democratic base in their homes on election day; while giving the right, alt-right and in deed far right a clinical last minute edge. The fact that almost two million popular votes were in excess for Clinton hints a system swindle. The minority actually won the elections; the large majority lost. Donald is in business; more in business politics than political business. He is managing very well to come across as unpredictable. Once he succeeds, his control will be firm and his taking ransom of America will be near definite. Yes, there are strong checks and balances on the executive, from the other arms of government. But stocks would tumble overnight after a single reckless line from the American President and the nuclear code if made susceptible to tweeter rants would cause ham before the senate convenes. Already Europe is skeptical, Asia jittery, Africa wordless and Russia’s green eyes are shinning in the dark without revealing their body posture. The Taiwan signal alerted China and so has the jab on Merkel over the “catastrophic mistake “. Uncle Sam should work hard to prevent a catastrophic mistake from his little nephew, the Commander in Chief. America’s military power and economic might may not be enough to save her from a black ridicule from the Whitehouse, especially when it is fast losing her moral ground and godly reason. Now everybody concerned is watching how his nominees will pass confirmation as credible drainers of the Washington swamp, especially with the Elizabeth Warren test apparatus so firmly in place. The nominees for education, housing and urban, health service have been so grilled that in spite of the power of numbers their passage may not be taken for granted.

The D.J’s hit song was “make America great again”…America first. Where does that leave the rest of the world? Sure America must be great, and so must be Africa, Asia, Europe and Oceania. America’s strength is in its unity and they paid the great price of the civil war to buy it. But the abolitionists’ victory over the confederates while hoping to achieve a more perfect union through a sort of conservative progress, is turning becoming a never ending civil rights struggle playing out the race card and mismanaging the nuances to create a global challenge through linkage with US immigration policy. So D.J. Trump will build the Mexico wall, threaten to undermine the one China policy to force China into trade deals that puts America first and discontinue the Trans-Pacific Partnership (TPP) and the North American Free Trade Agreement (NAFTA). How will other global places respond? D.J says “the United Nations has such great potential but right now it is just a club for people to get together, talk and have a good time. So sad!”. May be that’s true. But what is the implication for the rest of the world that takes the UN seriously. If he cuts U.S funding to the UN significantly, what will happen if others like Russia and China, in coming to the rescue cause a tumbling tilt? We have to accept that our choice of globalisations has significant difficulties needing address.

Some think President Donald John Trump is applying President Nixon’s madman theory, playing the unpredictable, to cause fretful moves form other global players, for America’s advantage. But whatever it is, we must appreciate the gains we have made from globalization in proper terms, not losing sight of the losses it has given to countries that have participated from its uneven playing field. The striking emergence is that America being a frontrunner in globalization is now sending nationalistic signals that raise the brow of those who embraced the global wave not too long ago. It’s only his first week in office. There are two-hundred and eight weeks in his four-year term; let’s hope Donald and Uncle Sam treat the rest of the family well.