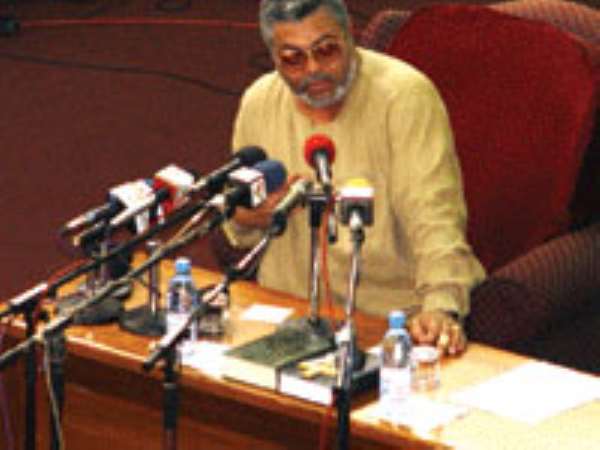 .. ICC cannot prosecute Rawlings (read) Accra, March 30, GNA - A new association called "The Association of Victims of the Revolutionary Injustice (AVRI)' on Wednesday said it would send Former President Jerry John Rawlings to the International Criminal Court for "his crimes against humanity and Ghana" by the end of this year. "At the International Court of Justice there will not be any smuggled indemnity clause to protect Ex-President Rawlings from his crimes against humanity and the people of Ghana," Captain Ben Duah (retired), Executive Secretary of the Association, said at a press conference in Accra. He said "renowned legal consultants" and some international nongovernmental organisations were assisting in the preparation to fast track prosecution process. "The time has come to drag Former President Rawlings to the ICC for his crime against humanity ranging from torture to murder," he said. He called for the scraping of the indemnity clause asking: "How can we say a Constitution guarantees freedom and justice on one hand and on other hand some people have the protection for their injustices?" Reacting to statements the Former President was alleged to have made during the last "Wahala Demonstration" in Accra, Capt. Duah said: "Ghanaians in their normal nature would like to disregard such effusions as irrelevant. However, those of us who know him better see the logical sequence of events leading to all his coup d'etats against this country being replayed. "(Former President) Rawlings always takes undue advantage of the genuine problems of the unsuspecting poor and vulnerable in society and by distorting facts, creates disaffection for the Government. "We cannot continue to defy logic and assume that he is no longer a danger to our country. We have to deal with him now." Corporal Matthew Adabuga (rtd), a former close associate to the Former President and a member of AVRI, said having confessed and apologised for his crimes, he believed if convicted he would face lesser punishment than Ex-President Rawlings. He admitted that as an instrumental figure in orchestrating most of the atrocities, he could be dragged together with the Former President to the ICC but would be pardoned because Ex-President Rawlings manipulated him and others. Corporal Adabuga described the statement he read as the Third Challenge to Rawlings saying: "This is the third time I am going to throw this challenge to (Former President) Rawlings. If he fails to come out clean, as he missed the golden opportunity at the National Reconciliation Commission (NRC), then I'm pledging here and now that the next time he would find himself put before the ICC... "I will be there to testify as a living witness to his involvement in various crimes against humanity and Ghana."