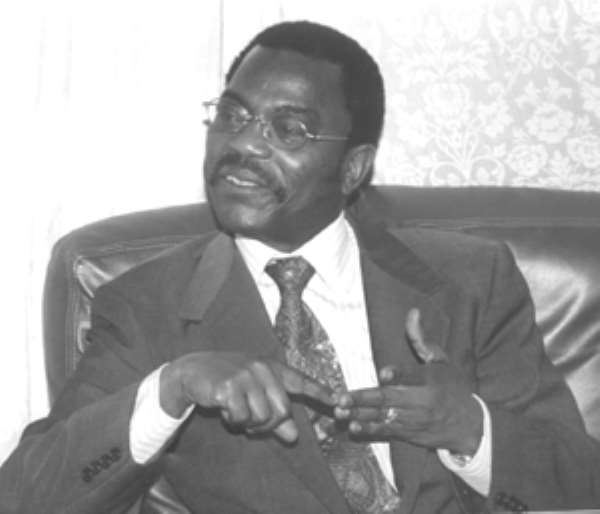 Accra, March 29, GNA - The Central Bank on Tuesday maintained its prime rate at 18.5 per cent arguing that a single digit inflation figure was not elusive.

It, however, cautioned against complications arising from unpredictable international market.

Addressing Journalists at the end of the second Monetary Policy Committee (MPC) meeting in Accra, Dr Paul Acquah, Governor of the Bank of Ghana (BoG), said nearly all the economic fundamentals showed a lowering toward single digit inflation.

He noted that with an improved food supply and moderate increase in food prices, the task of ensuring single digit inflation was within reach in 12 to 18 months.

"This is most probable considering the fact that volatility in price changes have reduced effectively," the Governor said.

Dr Acquah said overall, given the stance of policies, the balance of risk was tilting in favour of progress towards low stable price inflation and relative exchange rate stability with liquid money in the foreign exchange market.

"The risks to the outlook will be kept under review and assessed in the light of developments as they unfold."

He called said moderation and consideration for productivity especially in wage settlements would be needed to reduce the upward pressures on the price level in the near term.

The Governor said the pass-through effects of the corrective domestic petroleum price increases under deregulation and market-based pricing were working through domestic cost and wage setting.

Dr Acquah expressed worry about the surge in the price of oil on international oil markets, which currently stood at 55 dollars a barrel, stressing that if it were sustained "it will be a significant source of imported inflation risk, increase in the oil import bill and a draw on the cushion of foreign reserves."

Giving the broad figures, Dr Acquah said consumer price inflation fell from 11.8 per cent in December 2004 to 11.6 per cent in January 2005 on a year-on-year basis.

Inflation moved up to 14.0 per cent in February, with the recent 50.0 per cent increase in petroleum prices as part of the deregulation process.

Non-food index increased by 6.8 per cent compared with the 1.9 per cent in the same month last year.

Dr Acquah put the major sources of pressure on the consumer price index (CPI) as emanating from the non-food sector, transport and communication, housing and utilities, medical care and recreational and entertainment sectors.

Year-on-year non-food price inflation went up from 7.9 per cent in January to 13.1 per cent in February.

The Governor said the latest numbers showed that the growth of the monetary aggregates had continued to slow down from the levels observed in the fourth quarter of last year.

Dr Acquah said broad money supply growth declined from 50.1 per cent in January to 14.9 per cent by January 2005.

Dr Acquah said interest rates on the money market continued to remain stable showing very little volatility in a narrow broad range with the benchmark 91-day Treasury-Bill edging up slightly from 17.1 per cent in January to 17.17 by March compared with 18.3 per cent in March 2004.

On the private inward remittances, Dr Acquah said a total of 277.4 million dollars had been registered for January 2005 compared to the 197.8 million dollars for the same month last year. This represents 40 per cent increase above the previous figure with 81.75 million dollars coming from individuals.

On the outlook, Dr Acquah said there would be a continued progress along the path toward low stable inflation and increased GDP growth with relative exchange rate stability, given prudent implementation of fiscal monetary framework for 2005 polices.

He said there would be a good balance between fiscal consolidation and growth within the 2005 budget.

"The polices will provide stimulus through higher spending, personal and corporate tax relief with a public sector borrowing plan to reduce the domestic debt to GDP ratio to ease pressures on the domestic market for Government debt instruments.

"Firm implementation of the budget within a context of fiscal and monetary prudence would strengthen the fiscal and external payment position among other fundamentals."

Dr Acquah said of importance in the underlying fiscal and monetary dynamics would be a good alignment of public spending with resource inflows, including timely disbursements under the multi-donor budget support mechanism to maintain projected spending levels.