Gbese Mantse (King) In Trouble: What Did He Do? 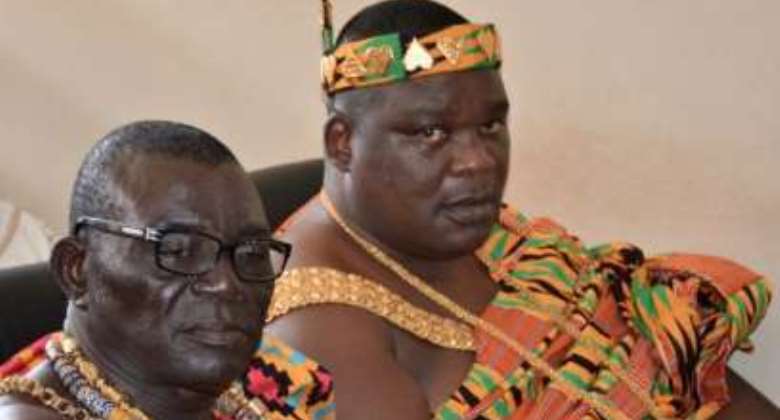 In the wake of the hyperactive campaigns of Ghana’s 2016 presidential and parliamentary elections, I warned politicians who couldn’t zip up their mouths or were suffering from verbal diarrhea to stay away from the microphones.

They should avoid coming close to that communication tool if they feel they’re allergic to it, I cautioned.

The reason, that weapon carried by media personnel is powerful and can cause one to speak nonsense if unprepared. Things could even get worse or nastier if the interviewer is smart and knows how to probe or better still throw the right punches.

You might feel punch-drunk by end of the interview and run home cursing your stars. Such episodes often climax themselves with this dud question--why did I say this? Or why did I do that interview?

Guys I told you do not throw caution to the wind. Do not dance with wolves if you aren’t one or belong to the group. I guarantee you when things get giddy you’d become a sacrificial lamb. Perhaps the major cause of such embarrassments stem from this-- when we wear the sycophancy gear. We say wacky things, make weird pledges and do dumb stuff.

‘People-pleasers’ I call them. We try to please and idolise celebs, politicians and personalities.

We pay lip and eye service. We make huge promises some of them too big probably bigger than our mouths. We defy conventional wisdom and common sense and forget that as mortals we don’t know what tomorrow might produce.

Thank Goodness the elections are over. And all the ‘Wahala’ and brouhaha that came with it appear to be simmering down. From where I sit I can say with authority that the majority of the Ghanaian populace is happy with the election of Nana Akufo-Addo.

I can also say that many people wished president Mahama got reelected. Unfortunately that didn’t happen. But we all find ourselves in the same boat—winners or losers. We’ve one nation one leader who is ready to serve one people with common destiny.

One week after the election somebody has found himself deep in the cesspool. Somebody is in the news or should I say is in trouble. Be mindful what you pledge or say in public because it might come back to haunt you.

Ironically the person in question is not one of the guys who throw foul or inflammatory words around. And he is not a politician. Nevertheless what he pledged during the campaign season is brewing trouble for him. The Gbese Manste Nii Ayi Bonte has bitten more than he can chew. He’d pledged to abdicate his stool if Nana Akufo-Addo becomes president of Ghana.

And the people have spoken. Democracy has worked again in Ghana--- not by the bullet but by the ballot they’d voted massively for the NPP presidential candidate.

On Tuesday when the president-elect Nana Akufo-Addo visited members of the Greater Accra Regional House of Chiefs in Dodowa the cameras found him (the Gbese king) even in his desperate attempt to sneak the lenses of the ‘devil’.

What do they say; you can run but you cannot hide. He’s been running helter skelter while the media relentlessly pursues him around the clock.

Indeed the constitution is emphatic about that. But some chiefs in Ghana have not paid heed to this. They have actively got involved in the political game—making pledges and all that. Some of them appeared more than politicians in the just ended 2016 campaigns.

I can’t tell you what was going through the king’s mind. But the images and reports I chanced upon via the social media and ghanaweb.com said it all.

Still caught in the spider’s web he tried to put up a stubborn fight. He told journalists he wasn’t ready to grant them interview.

How does that work Nii?
I trust you weren’t forced to make the pledge. And per tradition when kings and chiefs make pledges they must follow through it. Jephthah killed his teenage daughter in fulfilment of a vow (See Judges 11:30-39).

So, this is how I’m going to do it. I’ve decided to tail you to your residence. I’m coming after you with my camera, my microphone, my notepad and my pen. Read below how things pan out at Gbese Mantse’s residence as Gordon Offin-Amaniampong reports.

xxxxxxxxxxxx
“Allortey, find out who’s at the door,” says the king.

“Nii those guys who carry ‘macrofonz’ ‘kameras’and tape ‘rekodas’ (the media) in their hands everywhere they go.”

Hohoho ‘Sane eba’…Tell them I’m out of the country on my way to Dubai.”

But Nii how would they accept such a blatant lie from me. When in their naked eyes they’d seen you at the big gathering of Ga chiefs at Dodowa---trying to duck under the tables?’

Think about another plan I’m not sure this one would work. How would those guys reconcile this with the timeline? The time the durbar closed till now. Remember the gathering ended less than half ago. Besides, I suspect the guys had been tailing you when you snuck out from the conference room. In any case what should I tell them they’re still at the forecourt?”

“Really I can’t think far now. Why did I put myself in this shameful gown?

I thought president Mahama was going to win. But he’s let me down. They said ‘Ey3 Zu and I said Ey3 Za. They played ‘Onaapo and everyone did the Azonto and the Kalypo dance in the hope that victory was at our beck and call. Now see what he’s done to me.

Hold on. Let me try and think of plan B. Plan quick”

“Nii plan B at this time, I don’t think you’ve time to do that.”

Ok. I’ve a pretty good one maybe this would work.

“What is it Nii?”
How about this one, I’ve had food poisoning and they just rushed me to Korle Bu Teaching Hospital?

Yup, this one sounds better. What if they go to Korle Bu and they don’t find you there?

That would be a wild goose chase, everyone does that sometimes. But I know that wouldn’t stop them from chasing me and my shadow. I know those guys. When they’re at it they give their all. They know no stop. But I think when the worse happens I will abdicate the stool as I’d pledged.

I think they wish my downfall. I hate these media guys. I’ve been wondering over the past week asking myself: Who gave these guys the power to police me and invade my circles? More so I hate to be called a coward. I know they will label me as one if I fail to do so.

So I’ll come out pretty soon to make that announcement if that’s what they want.”

Nii, I beg, no one has or had called for your abdication. You pledged to do that, so all we are saying is pack bag and luggage and leave the palace. Everyone is watching you now. .If you find that too difficult to do, I suggest you eat the humble pie. Make a press conference and apologise to your people.

Make a pledge to ‘Sin’ no more. Two, promise to stay out from active politics and promise to work with any government or candidate that comes to power. Remember you an overlord of this vast land and whatever you say in public or private weighs so much. The people you oversee trust you and they respect you. Therefore do not meddle into active politics they can lead you into ‘sin.