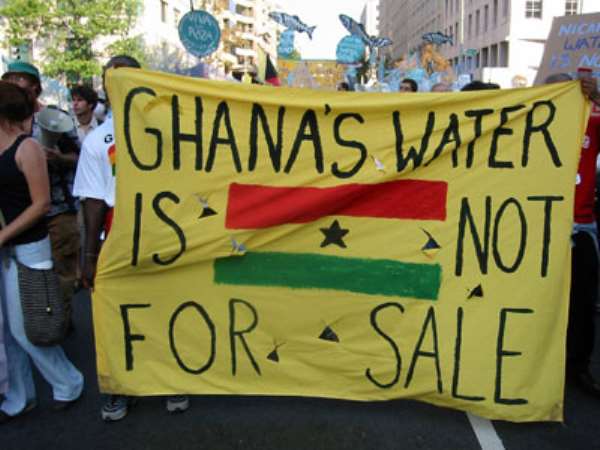 (Joy Online) -- Government's move to implement what it calls private sector water participation in the provision of water seems to have suffered a setback.

One of the multinational firms hoping to partner government in the provision of water in the country, Biwater Plc is said to have pulled out of the bidding process.

The day also marks the launching of the "Water for Life" decade, during which the United Nations is seeking to halve the number of people without access to safe drinking water and basic sanitation by 2015.

While government argues that private sector participation in the provision of water is the only way to improve the situation in Ghana, critics say the pull out of Biwater is a pointer to the fact that government argument is flawed

The UN says more than 1.1 billion people around the world lack safe water and 2.4 billion have no access to sanitation, leading to over 3 million deaths every year. Locally, the Ghanaian government says private participation in the provision of water would make the commodity cheaper and more easily affordable for majority of Ghanaians.

Government's move has come against strong criticism from water and civil rights campaigners who have argued that any privatization of the water sector will only undermine access to clean water for Ghanaians.

But government has gone ahead and actually secured a 103 million dollar grant from the World Bank under the Ghana Urban Water Project to implement the policy.

Subsequently four multinationals including British Biwater Plc as well as France-based Suez, Saur and Veola put in bids to partner government to implement the policy.

However Biwater has pulled out of the process and the campaigners are claming a small victory in their fight against water privatization.

Alhassan Adam, a member of the Coalition against Water Privatization says they believe the remaining bidders would also pull out of the project.

“ We have information that Suez is also pulling out, if it is confirmed that means we are left with two key international players and we would make sure that we campaign to pull them out because their track records are not good at all.” He said.

But officials of the Urban Water Project say Biwater has not officially informed them of the pullout.

According to Enimil Ashong Communication Specialist with the project, even if the company has indeed pull out several other firms still have interest in the project.

“ About eight companies are bidding and if anybody pulls out we would still have quite a lot of people expressing interest worldwide.” He said.

Mr. Ashong further alleged that the campaigners against water privatization are spreading lies in the international media about the project. A situation he says is worrying.

While government and critics may disagree on whether or not to involve the private sector in the provision of water, both parties agree that as an essential commodity clean water should be made available to the majority of Ghanaians.

Police gun down two suspected armed robbers in gun battle at...
3 minutes ago