Letter To My President-Elect (Part One) 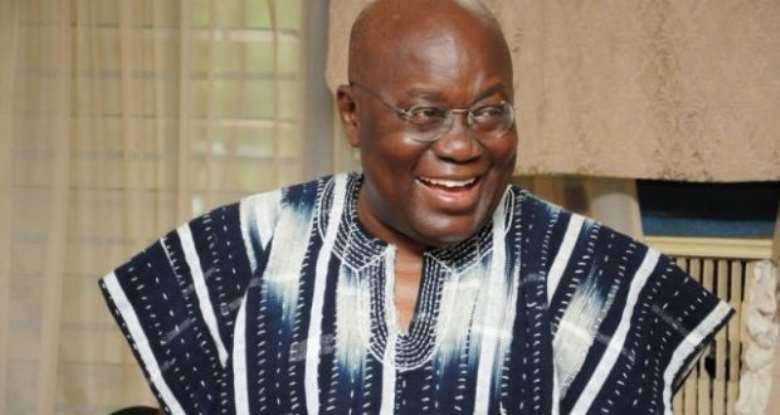 Your Excellency,
You may remember a letter I wrote to you in September 2013. In that letter, I praised your courage in going to court over the EC’s fraudulent electoral practices and advised that you hung your gloves, so you could dedicate the rest of your life to charitable courses, especially building schools in the countryside for future generation of Ghanaian leaders.

Well I respected your decision to give it another try and now here we are today, President-elect of the Republic of Ghana, after a move that the legendary Pele and Maradona would have envied in their hey days.

Now the real battle begins.
You have already mentioned a special prosecutor to fight corruption and so I shall not talk about that. Instead, I will suggest that the remit of the special prosecutor must include the Electoral Commission. Everyone who was remotely involved in the dastardly attempt to once again thwart the free will of the people of Ghana must be fished out, prosecuted and jailed as a deterrent to future miscreants. If the chairperson was any involved in any shape of form, that must be grounds enough for her prosecution and removal. What they tried to do last Wednesday could have plunged Ghana into chaos by Friday the 10th.

Sir, our country is in one hell of a mess and I know you already recognise that the task will not be easy, but I also believe that with the right kind of dedicated men and women and your eye for detail,, it can be done!

Education
Our education system, especially as obtained in the villages and the deprived areas of the country skinks to the high heavens. With the assistance of corrupt officials in Accra and the regional capitals, millions of Ghanaian children are going through the motions with nothing to show for by means of the three Rs (Reading, wRiting and aRithmetic) In fact most of them do not even have native Ghanaian wisdom.

I am part of the generation the British call the “Baby Boomers”, those born between 1945 and 1955, the ones behind your generation. We are the generation of Ghanaians that got the best education and home training, but have given birth to and simply “reared” the worst group of boys and girls to have ever walked on the territory we now call Ghana! Our younger brothers, sisters, nephews and in some cases children are the “babies with sharp teeth” who only go on radio and television and spew crudities in a mixture of poor English and whatever Ghanaian language they speak. Their grammar is a lot worse, as you might have encountered on you social media networks.

To clean up the system, every edifice that calls itself “international or preparatory” school everywhere in the country must be thoroughly examined and rated. Any of those schools that comes below 45% overall, must be closed down immediately. They are fraudulent institutions that are being used to fleece the poor people of Ghana. How can anyone institute “extra classes” for four year old nursery pupils

In the public system, some schools/districts have been consistently scoring ten percent or less (zero in some cases) at the basic level examinations. Ever head teacher who school has scored less than thirty percent passes (aggregates A-D) in the past three seasons., must be transferred

It may be necessary to do a similar exercise in the Senior Secondary Schools. While we are at it, the tax force that will be needed to examine the schools should also take a look at the books that are being written by semi-illiterate teachers and school drop-outs, the grammar, the spellings and comprehension are simply unbelievable. A majority of those books belong to the bonfire.

Also, many of the school pavilions (including ones constructed by the Kufuor government in 2007/2008) are already falling to pieces. We need to bring back the School Inspectorate division of the Ministry of Education, to inspect not only classroom work, but school buildings as well, before a major disaster strikes the country. They will also need to take another look at the Ghana Education Service. At the time a small and dedicated group of professional teachers ran our schools, we were doing far better than under the present unwieldy carbuncle. We need the brilliant teachers in the classrooms, not in ramshackle offices where they churn out tons of useless reports and memoranda nobody reads.

Please, please, please, as a beneficiary of the system yourself, bring back the “Academicals,” let us begin the competitions with Nigeria again. Can you in remember any instance when team members and their officials fought over money or camp conditions anywhere on the international scene? That leads me directly to sports.

Sports
Sir, I am sure you remember that before the United Kingdom went metric, Ghana held the then Commonwealth 4 X 110 yards relay record jointly with England (Mike Ahey, BB Bashiru, AOLawson and Mike Okantey?). They trained in Takoradi with Rose Hart.

We were also at the top with England and Uganda in boxing. No more, we are now a one-sport (football) nation, and we don’t even do that well, we only carry physical cash on board aircraft to throw away in foreign lands. And the reason is not difficult to find. The venues where the most competitive colt and part-time football marches were played in Sekondi-Takoradi, Kumasi, Accra, Obuasi, Cape Coast and Koforidua have all been turned into lorry stations, drinking spots or funeral grounds. Koforidua Jackson Park has actually been turned into a concrete jungle, for funeral celebrations.

Whatever happened to sound mind in a sound body? The obesity crisis in Europe and North America is catching up with us, We need to exercise as a nation, not the provocative political party run-around thing, real exercises that keep our citizens fit and healthy,

Where are the competitive hockey, cricket and volleyball matches in our schools? We need to bring them back. Come to think of it, half of the money that is stolen annually at the Ministry of Youth and Sports, Ghana Football Association and the Sports Council, can finance all the dead or dying sporting disciplines in Ghana.

Policing
Sir, I have travelled around the world and experienced policing in all its forms – service, force, mounted constabulary, etc., but the worst of their kind seem to be the preserve of West Africa – Ghana, Nigeria, Togo and Cote d’Ivoire. Our Ghanaian one, considering their numbers in relation the total population, is probably the worst of them all. What was all that disgraceful demonstration of “no voting, no police duties”, about?

Sir the Ghana Police Force or is it Service? needs a major surgical operation. It is not only rotten, it is damn incompetent too. How can someone run his or her vehicle through a crowd of citizens causing major injuries, without the driver being charged in court? How can someone make serious allegations of bribery on national television and radio without anyone being invited for questioning? How can someone carry twelve kilograms of a class A drug through airport security, into an aircraft, to a foreign country without anyone being disciplined?

Your Excellency, as happens in other countries, we need an army officer with the rank of colonel or above, to do a clean of Ghana police. To begin with, I suggest a series of examinations in policing at all levels, to weed out the clowns in the system..

If for security reasons, the extortionate “barriers” littered all over the country cannot be dismantled immediately, they should be reduced drastically. Instead, the money spent on their salaries and overtime allowances should be invested in a helicopter force that will take to the air and monitor over speeding, reckless driving and other offences on the roads, from the air and report to desk officers.

Sometime ago, Nigeria used registered volunteers who travelled anonymously on buses and other public transport systems and recorded the shenanigans of drivers and police officers.

By the way, until our police service is reformed, no policeman should be allowed to attend any international course anywhere in the world. It is just a waste of resources sending a bunch of people on courses that do not benefit anybody!

Prisons
Ghana’s prisons, both guards and prisoners, are as rotten as the police who make the arrests and prosecute the prisoners. In the full glare of prison officers, prisoners have established fiefdoms in the prisons with which they extort monies from fellow prisoners. They charge for beds, toilets pots, everything they can sell. Prison officers know about these illicit business empires in the prisons but they turn a blind eye.

Then there are the CID case officers. While in Ghana a month ago, I met a family that had sold everything they owned not on lawyers’ fees, but on “transport allowance and other incidentals” of CID case officer. This remand prisoner has spent more than one year at the Nsawam Medium Security Prisons. He has to attend court hearing at a District Court somewhere in the Central Region.

Any time this case officer feels like he needs money form the family, he concocts a fictitious “hearing date and asks the family to “send transport to fetch the prisoner.” That is taxi fare. He sends the prisoner to the court knowing that the case will not be called. Late in the afternoon, he calls the family to tell them that “the case has not been called and it is too late to return the prisoner to Nsawam.” That means toiletries, food, clothes and other things, none of which reaches the prisoner anyway. Eventually after two or three nights, the prisoner must be returned to Nsawam. This apparently is the norm in most of the prisons in Ghana.

And talking about court adjournments, the searchlight ought to be turned on the courts. Any judge/magistrate who has five or more cases that have lasted more than one year must be transferred immediately. They are the ones who sell justice. I have a civil case that has been through the justice system for more than twenty years. I have dismissed it unilaterally,

May the good Lord richly bless you as you embark on this arduous journey.