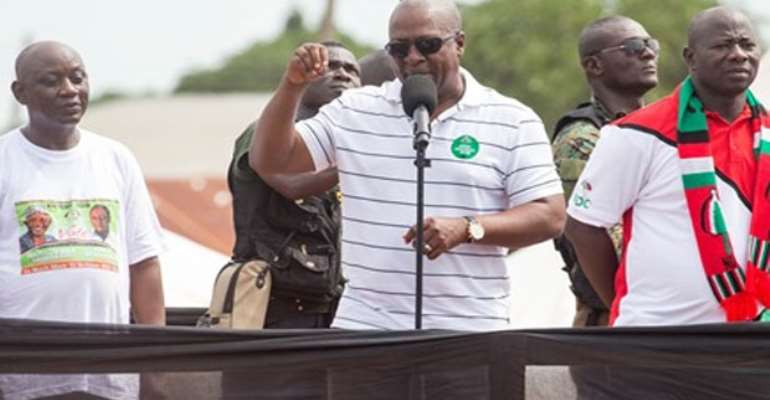 President John Mahama yesterday painted a rosy picture of the country's future when he announced that “Ghana is ready for an economic take-off starting 2017.”

The President was speaking as a special guest at the Black Star Square during this year's Eid El Adha or festival of sacrifice observed worldwide by Muslims.

The attendance at the annual event was very poor, compared to the last Eid-il-Fitri – about two months ago – and a lot of the congregants had left by the time the president was delivering his speech.

It was not the first time the president was telling the congregations about 'better days ahead,' as they were given similar promises in past celebrations but with nothing to show, except more promises.

Still on the economy, he assured Ghanaians that his government was working towards making Ghana an “economic powerhouse” in West Africa.

He said: “…together we have come very far and I believe that together we will achieve even more.”

President Mahama's speech was segmented because it would appear he wanted to cover many subjects, being an election year.

It was like rehashing the NDC manifesto to the gathering.

For instance, he said that government had undertaken many projects which are intended to impact positively the lives of Ghanaians.

“We are expanding our ports; we are building more airports; we are upgrading others to international standards and we are providing more buses to create easy transportation linkages between our towns and villages throughout the country to facilitate movement of people and goods from one place to the other,” he said.

Government, he asserted, had built new roads and rehabilitated several others across the country.

On agriculture, as if to water down the NPP presidential candidate, Nana Akufo-Addo's 'one village one dam' promise, President Mahama said irrigation projects are being constructed in “readiness towards our green agricultural revolution.”

More communities, he said, were being connected to the electricity grid to open them up for development.

“We are developing our oil and gas resources to guarantee power and energy supply; we are investing heavily in restoring our railways and together we have come very far.”

The president charged Ghanaians to uphold the country's democracy pedigree, as it goes to the polls on December 7.

All Ghanaians, he urged, should uphold the country's image as a model of democracy before, during and after the forthcoming polls.

“As we gradually inch towards the 2016 general elections, we should all endeavour to uphold the peace that has characterized our elections. It is this that has made us to be described as the model of democracy in Africa. I am always thankful that Allah has blessed me with the opportunity to be the president of such an industrious united and peace-loving people like Ghanaians. It is for this reason that I am very confident that once again when our democratic credentials are tested on December 7, we will respond with vigour and deliver yet another peaceful, fair and transparent election to the world.”

Hajj Fiasco
He did not have kind words for the management of this year's Hajj, following perhaps the inability of many prospective pilgrims to embark upon the trip.

He gave assurance that the challenges encountered this year would not recur in future because certain measures would be put in place.

“This year, we conducted a successful Hajj, and I wish to express my regret to all who due to certain reasons were unable to embark on the Hajj this year. This was due to many factors. One was the airlifting of 2,000 passengers from the Tamale International Airport, which was very well patronized, and reduced the quota of those who took off from Accra.

“Another factor was the dramatic growth in pilgrim numbers beyond the quota that was assigned Ghana by the Saudi authorities.

“I have asked the Hajj Committee to request an increase in our quota of pilgrims from the current 5,424, to 7,000 pilgrims next year,” he claimed.