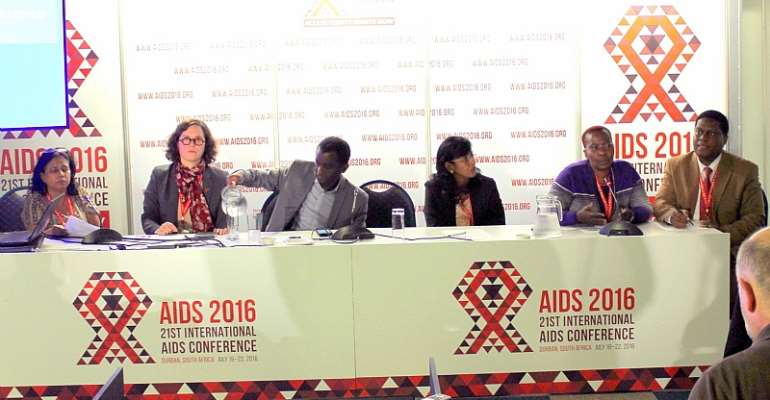 (CNS): At the 2015 United Nations General Assembly, governments committed to achieve SDGs by 2030, one of which is to end AIDS and TB by 2030. If people living with HIV continue to die of TB, we will not only fail to achieve SDGs but also lose gains made in the fights against HIV and TB.

Keeping in mind the crucial interplay of TB, HIV and non-communicable diseases (NCDs), a special session on "Can we afford to lose gains made in fight against HIV and TB? Integrated responses are a must to meet the SDGs by 2030!" was jointly hosted by AIDS Society of India, CNS (Citizen News Service), Lilly MDR TB Partnership, Gujarat AIDS Prevention unit ISRCDE, ARUNA and Vote For Health campaign at the International TB Conference (TB 2016) held just preceding the 21st International AIDS Conference (AIDS 2016) in Durban, South Africa.

The panelists were an eclectic mix from the field of affected communities, researchers, private sector, country representatives, and international public health agencies. Each of these voices is no less important than the other. Hence to be fair, here is a glimpse of their responses (in reverse alphabetical order of their names).

Dr Padmapriya Darsini, Senior Scientist, National Institute for Research in Tuberculosis, Indian Council of Medical Research (ICMR): “In order to sustain and increase the gains we have made in the fight against TB, we need more political commitment to reach SDGs by reducing TB deaths in PLHIV. It takes very long for research findings to reflect in a country’s programme. So if there is a political commitment for faster use of research findings for public health, we will be able to better control TB and HIV.

Although India has made a lot of progress, we still have a long way to go. If we get back the political commitment and the funding to the level when we started initially, things will improve. There should be also more linkages between the government and private sector. This would ease the resource crunch and help improve our gains in fighting HIV and TB.”

Nomampondo Barnabas, Civil Society Liaison Officer, International Union Against TB and Lung Disease (The Union): "As I have been living with both the diseases, I speak on behalf of both of them. We cannot afford to lose the gains in the fight against HIV and TB. I have been living with HIV since 1997, and was diagnosed with TB in 2006. But I am alive today. When we talk of responses and programmes, we look at the figures and often forget the human faces behind them. Sometimes we tend to work in silos, dealing with one epidemic at a time. This must stop. There is need for integration. We also need to work closely with religious and faith based leaders as people do listen to them.”

Dr Haileyesus Getahun, WHO Global TB Programme’s coordinator of TB/HIV and community engagement unit, and Co-chair of TB 2016: “We have come a long way in the last decade and having TB 2016 as an integral part of the 21st International AIDS conference bears testimony to it. Even though 6 million deaths of PLHIV due to TB have been averted since 2004, TB is still the leading killer of PLHIV. SDGs give us a very unique opportunity of working together for TB and HIV. Eliminating TB disease in PLHIV should be the starting point.

According to the WHO guidelines, the minimum expectation from TB and HIV programmes is to provide integrated TB and HIV services to people who need them; and governments will have to brace up their efforts. We need to find ways to harmonise our work and synergise our efforts, as well as increase our efficiencies. We have to look at the patient in a holistic manner. Else we will not be able to achieve SDGs.

Currently, we are able to diagnose only half of the PLHIV with TB. It is very important to get this unidentified population into healthcare systems. One way to do this is to promote integrated community based activities. We will have to raise awareness of community health workers, healthcare workers and community members, to be always suspicious of the other disease when they are dealing with one. Diagnosis for HIV as well as TB has to be scaled up as it will help us detect the remaining 50% of HIV associated TB cases.

CSOs should come forward to reinforce the public health importance of interaction between HIV, TB and NCDs and to ensure that governments take their responsibility seriously and integrate the WHO recommendations in their national programmes.”

Dr Christopher Zishiri, Country Director (Zimbabwe), International Union Against TB and Lung Disease (The Union): “The high TB epidemic in Zimbabwe is largely driven by HIV. Our intervention plans are based on integration of HIV-TB services. The intervention is a one stop shop like a supermarket. We did a pilot in 2008 to see the feasibility of decentralisation of services in 3 high burden sites, which gave very encouraging results in terms of anti retroviral therapy (ART) uptake. Currently we are replicating this strategy in 23 more clinics. Due to integration, uptake of TB-HIV services has increased from 74% to 94%. Use of GeneXpert has reduced turn around time in diagnosis from 1 week to 24 hours. But some key challenges still remain—GeneXpert is yet to be rolled out in the whole country.

Amy Israel, Programme Director for Lilly's Global Health Programmes: “The Lilly MDR-TB partnership focusses on China, India, Russia and South Africa and the Lilly Non-Communicable Diseases (NCD) partnership focusses on Brazil, Mexico, India and South Africa. We are trying to improve treatment outcomes closer to the primary care or community care through an operational framework called Research Report Advocate. Every model we support has research generated data based report that we advocate.

South Africa is one of the very high TB burden of, HIV, diabetes and hypertension. We are developing a model of integrated person centric care in which a person will have to go to just one clinic (and not 3 or 4) to be taken care of these diseases.

There is a need for linkages between public and private sector. In India many people go to the private sector as their first point of care, regardless of their economic status. So we are engaging with private pharmacists and some private hospitals for TB and diabetes care, and have seen treatment adherence rates increase to 95% in TB.

CSOs will have to work with local, provincial and national governments for implementing bi-directional screening of people for TB and diabetes. We are working with school children in Brazil, helping them and their parents to take better care of their type 1 diabetes. Schools offer good opportunity to educate parents and children both.”

Thankfully today ART has made it possible for PLHIV to live normally. It is also possible to treat and cure TB. However, we need to remember that there are other co-morbidities of NCDs that people with TB and HIV may have to deal with. So we will have to deal with the entire gamut of diseases that may act as obstacles in our goal of eliminating TB and HIV. It is prudent to remind ourselves of promises made by the governments for sustainable development by committing to achieve SDGs by 2030 - not just to end TB and HIV but also to reduce mortality associated with NCDs by one-third by 2030 - among other promises for integrated development.

I'll Complete All My Abandoned Projects By This Gov't — Maha...
37 minutes ago