India Edge Out UK In FDI To Ghana 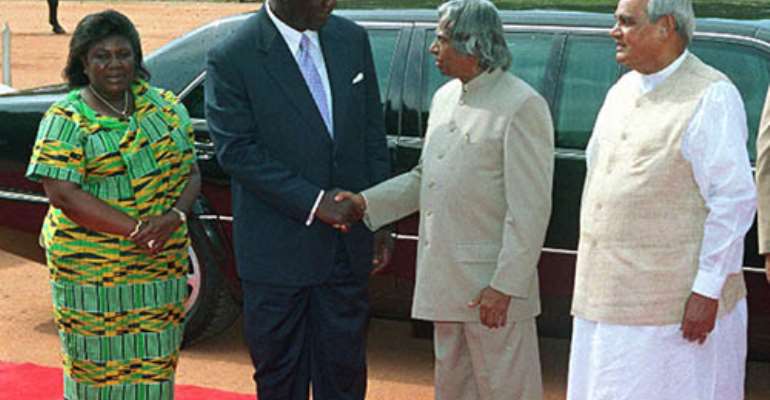 INDIA has edged out Britain as the leading Foreign Direct Investor in Ghana. For the past four years, India registered 183 projects followed by Britain with 177, China 161, Lebanon 135, the USA 126, and Germany 104.

The fourth quarter results of the Ghana Investment Promotion Centre (GIPC), showed that Nigeria and South Africa continued to be the leading African countries investing in Ghana with 53 projects from Nigeria and 33 from South Africa.

Other developing countries that made significant inroads were Malaysia, which registered 12 projects and Cote d'Ivoire which brought in 11, the results indicated.

At the end of 2004, India had registered 70 projects in the manufacturing sector, followed by China with 50 projects and Lebanon with 49 projects, the GIPC last quarter results stated.

Britain, however, had the highest number of registered projects of 69, followed by the USA with 54 projects and Germany with 37 projects, it said.

The GIPC said the pattern of regional distribution of the projects created the impression that the locational incentives introduced in the 2004 budget had not yet made any significant impact.

“It should however be borne in mind that this has been an election year during which most potential investors would usually adopt a rather cautious stance,” the centre explained.

The GIPC statistics indicated a continued concentration of most projects in the Greater Accra Region which recorded 78.8 per cent of all registered projects with 6.98 in Ashanti.

Western Region had 4.75 per cent, Central Region had 3.30 per cent, Eastern 2.84 per cent, with the remaining five regions sharing 3.31 per cent of the projects.

“It is hoped that the investors would take advantage of the locational tax incentives to bring about a more even distribution of projects to the benefit of the less endowed regions,” said the GIPC.

The centre announced the opening of its Investor Services Centre, which it intends to use as a “one-stop-shop” to facilitate the implementation of investments in the country.

“The centre now houses top-level officials from the GIPC, Ghana Immigration Service, Registrar General's Department and the Customs Excise and Preventive Service,” it explained, adding that the National Communications Authority and the Bank of Ghana were linked to the centre electronically.

According to the GIPC, the one-stop-centre had started effecting a reduction in the time it takes to register businesses and handle investor problems.

“Implementation time of the investment process has also reduced and we are poised to provide better customer care to investors,” the last quarter results of the Ghana Investment Promotion Centre said.