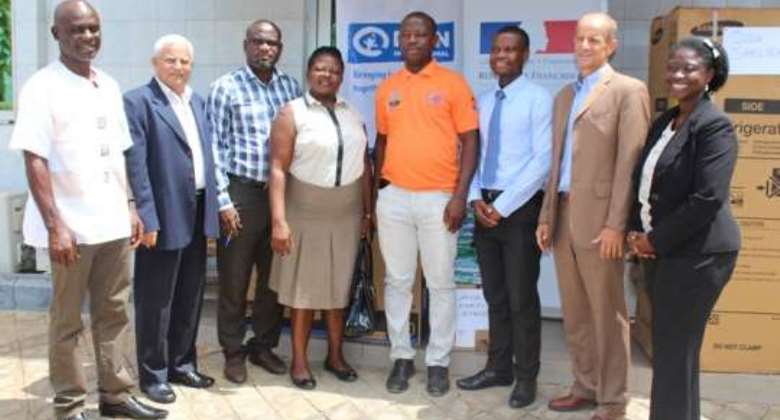 By Iddi Yire, GNA
Accra, May 6, GNA - Plan International Ghana, under its Anti-Human Trafficking Project, has distributed some basic items valued at GHÈ¼ 18,000 to three shelter homes to enhance their smooth operations.

The beneficiary institutions are the Don Bosco Child Protection Centre in Tema; Ghana Make a Difference, Mankesim and The Shelter for Abused Children, Osu.

The Shelter for Abused Children was given one flat screen television set, one double door fridge and 30 pieces of insecticide treated mosquito net.

The three-year project, valued at $ 250,000, started in 2013 and is being funded by the French Ministry of Foreign Affairs and implemented by Plan International in five countries; Ghana, Togo, Benin, Nigeria and Cameroun; with each beneficiary nation entitled to $ 50,000.

The Country Director of Plan International Ghana, Mr Prem Shukla, said Ghana, like other developing countries, had challenges with human trafficking as it was fairly easy for ordinary travelers as well as smugglers to move between porous borders.

He said Ghana had been identified as a source, transit and destination point for human trafficking.

'Many of the trafficked victims happen to be girls, women and boys whose rights to education, health, shelter and protection are seriously compromised,' he said.

Mr Shukla said Plan International as an organisation had over the years worked to seek the best interest of children to enable them to reach their full potential.

He said the Anti-Human Trafficking Project had provided support to CSOs and shelter home managers to help them provide suitable services to trafficked victims, especially children.

He said under the project, shelter homes and CSOs had received training in psychosocial support, legal and regulatory framework, advocacy, report writing and project management.

He said the objective was to equip CSOs and shelter homes with capacities to identify trafficked victims, help victims know their rights and have access to justice, give victims psychosocial care, write appropriate reports and disseminate information about the phenomenon.

He urged all the beneficiary shelter homes to make the items available for use by its intended beneficiaries (trafficked victims) and should also maintain the items well in order to prolong their lifespan.

He expressed gratitude to the French Ministry of Foreign Affairs for funding the Anti-Human Trafficking project.

'Let us continue to strive to create a safe world for all people especially children,' he said.

Mr Asum-Kwarteng Ahensah, the Plan International Ghana Project Support Manager (Strategy), said the project sought to strengthen national capacity to fight human trafficking based on an integrated approach such as support for the justice system and CSOs for the protection of victims.

Mr Pierre Kervennal, the Advisor for Development, Human Rights and Environment of the Embassy of France, said under the project, France had been supporting the human trafficking unit of the Ghana Police Service and the Judicial Service as part of measures to build their capacity.

Mr Christopher Komla, the Assistant Head of the Shelter for Abused Children, lauded the French Government and Plan International Ghana for the kind gesture.

He promised that the beneficiaries would take good care of the items and ensure that the children benefitted from them.

Speaker Bagbin calls on Israeli counterpart in Jerusalem
5 minutes ago