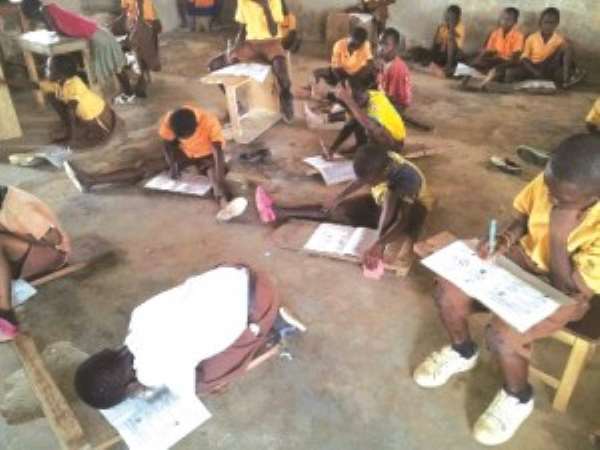 From Alfred Adams, Takoradi
A section of the pupils of the Bondaye D.A. Methodist Primary school in Prestea

Despite the roof top noise being made on the various radio and TV stations by the members of the Mahama-led National Democratic Congress (NDC) government that problems in the education sector have been solved, the opposite is the case when one goes to the ground.

Barely a week after the media reported that pupils in some basic schools in the Bole Bamboi district of the Northern Region are compelled to sit on the dirty floor during class hours, The Chronicle can state that pupils of the Bondaye D.A. Methodist Primary school in the Prestea Hunni-Valley District of the Western Region also have no tables and chairs to sit and write on.

Schools in the Bole Bamboi district that have no tables and chairs for their pupils include; Bole R/C Primary, R/C Primary B and Bole Methodist Primary, which are situated close to the district assembly block and the police station. This reporter can state that the absence of tables and chairs for the pupils of the Bondaye D.A. Methodist primary serves as a huge punishment for the poor pupils.

The Bondaye D.A Methodist, with a population of about 500, is the only school which serves satellite communities, such as Nsuta and Bepose among others. The Chronicle gathered that while the table and chairs provided by the authorities to cater for the pupils in Primary 1 to 6 are simply inadequate, quite a number of them have also broken down.

The continuous absence of tables and chairs in the school to enable the pupils concentrate on their studies has over the years set tongues wagging, as to the role of the Prestea Hunni-Valley District Assembly.  Chairman of the Parents and Teachers Association (PTA) of the School, Mr. John Quainoo, also known as 'Ghana man', who confirmed the story in an interview with a section of the media, was seething with anger over the development.

Speaking with journalists in Bondaye over the weekend, Ghana man regretted the level of apathy and feet dragging that the Assembly has adopted to deal with the situation in the school.  Mr. John Quainoo told this reporter in a follow up interview that the absence of tables and chairs in the school is compelling the pupils to sit on the bare floor to write and study, does not speak well of a government which claims to have invested in the people of the country.

Ghana man continued that he and the elected Assembly-member for the area had personally reported the problem to the District Assembly, but for whatever reason, it (the Assembly) has turned a deaf ear to them. Consequently, he and the Assembly-member turned their attention to one of the mining companies to come to the aid of the school, saying they are yet to receive a response.

Continuing, Mr. Quinoo noted that it was the former Member of Parliament (MP) for the area, Hon Anthony Aubynwho donated the tables and chairs to the school during his tenure, stressing that since then the school had not received any assistance from the Assembly.