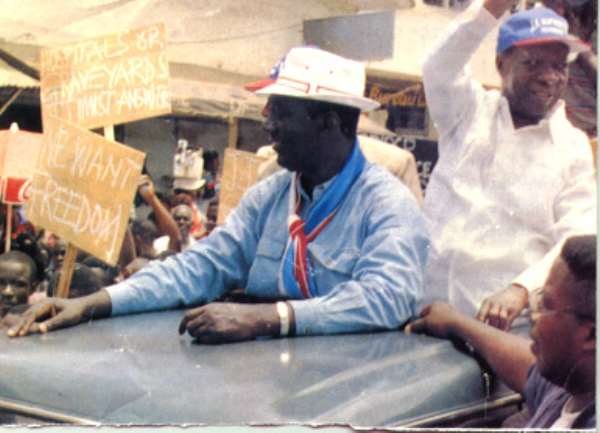 ... As Chiefs laments neglect under (P)NDC ...¢500m for rehab of Swedru Girls dormitory Chronicle -- AKIM SWEDRU and Akim Oda in the Eastern Region yesterday shook to their foundations as a massive crowd defied heavy rains and filled every space of the towns to give President John Agyekum Kufuor and his campaign team a rousing welcome.

With the rapturous crowd chanting wadruwudiamu, wadruwudiam, which literally means 'you have arrived home', President Kufuor used the rally to thank the people for their unflinching support to the NPP and his government.

The slogan, “ wadruwudiamu, wadruwudiamu” was not a joke, as the NPP was the only visible party that could be seen in the area in terms political organization, because the opposition NDC was totally “ out of coverage area”- no billboards, no offices.

It was therefore not surprising that former president Rawlings was stoned last week when he went to the area to campaign for his party, the NDC.. Addressing the rally, president Kufuor appealed to the people to return his government to power to enable them move the country onto a sound economic pedestal.

He appealed to the party supporters to intensify their campaign to win more people for the party to make the December 7 polls an easy task.

Addressing the gathering, the Chief of Akim Swedru, Nana Oware Agyekum III, noted that for almost 20 years of Rawlings' P(NDC) regime, the area was left to its fate because the area was deemed to be of the UP tradition.

“Because we were perceived to be supporters of the Busia-Danquah tradition, all the development projects in the area were neglected,” he said.

According to Nana Agyekum, the water supply of Swedru was on the verge of collapse while the Akim Swedru Secondary School which was built during Busia's second republican government was also left to its fate and did not see any mark of improvement.

He said the road network in the area was nothing to write home about and therefore lauded the present government for tackling the problems facing them within the first three years as compared to the 20 fruitless years of the NDC government.

According to the chief, beside the roads, even their perennial water problem had been solved, all within three years!

Nana Agyekum narrated how during the 2000 elections, the NDC got some contractors to heap sand and stone on some of the roads in the area but soon after the defeat of the party, the materials which were placed on the road mysteriously vanished, to the surprise of the people.

He, therefore, charged his subjects to take all these events into account and vote wisely for the people who would not use deception to be in power, come December 7. He expressed concern over the lack of inadequate dormitories for girls at the Swedru Senior Secondary School and appealed to the government to help solve the school's accommodation problem.

Nana's request received instant attention when President Kufuor pledged to get Mr. Yaw Osafo Maafo, the Minister of Finance who was one of the big shots in the campaign team to release ¢500 million for the construction of the Swedru Secondary School girls' dormitory, amidst deafening cheers from the thick crowd.

The president has since returned to Accra