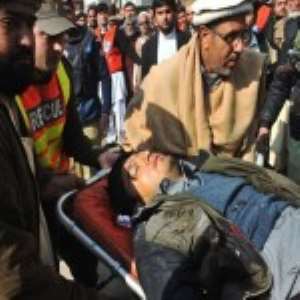 Security forces have ended a gun and bomb attack on a university in north-west Pakistan in which 19 people were killed and 17 injured.

One Pakistani Taliban commander said the group had carried out the assault, but its main spokesman denied this.

Prime Minister Nawaz Sharif said in a statement: “We are determined and resolved in our commitment to wipe out the menace of terrorism from our homeland.” ‘Teacher shot back’

The attackers struck at around 09:30 local time (04:30 GMT), apparently climbing over a back wall under cover of the thick winter fog.

Intense gunfire and explosions were heard as security guards fought the attackers.

Students and staff ran to find cover in toilets and examination halls.

One student told television reporters he was in class when he heard gunshots: “We saw three terrorists shouting, ‘God is great!’ and rushing towards the stairs of our department.

“One student jumped out of the classroom through the window. We never saw him get up.”

Reports say a chemistry lecturer, named by media as Syed Hamid Husain, shot back at the gunmen to allow his students to flee, before he was killed.

.
Geology student Zahoor Ahmed said the teacher had warned him not to leave the building after the first shots were fired.

“He was holding a pistol in his hand,” he was quoted by AFP news agency as saying.

“Then I saw a bullet hit him. I saw two militants were firing. I ran inside and then managed to flee by jumping over the back wall.”

The victims – mostly male students – were shot in the head or chest. Seventeen people were injured. At least one security guard also died.

Images from inside the university show a pool of blood on the floor of a dormitory and the charred corpses of two alleged militants lying on a staircase.

A senior Taliban commander, Umar Mansoor, told the media the attack was in response to a military offensive against militant strongholds. He said four suicide attackers had carried out the attack.

However, the group’s main spokesman, Mohammad Khurasani, later told the BBC the Taliban had not been involved. He condemned the attack as “un-Islamic”.

An assistant professor at the university, Dr Shakoor, told the BBC most of the students and members of the faculty would probably not have arrived by the time the attack started.

About 3,000 students are enrolled at Bacha Khan, but hundreds of visitors were also expected on Wednesday for a poetry event.

Just days ago, some schools in Peshawar were closed by the authorities amid reports that militants were planning an attack.