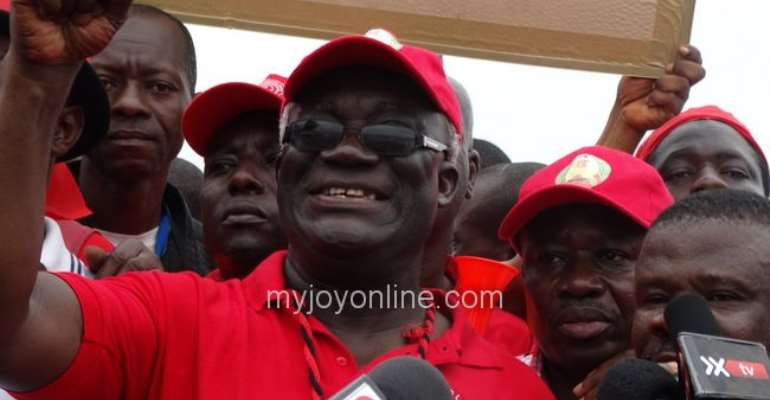 The Trades Union Congress says it will not sit down for government to continue raking in more revenue in taxes at the expense of a collapsing industrial sector.

Secretary General of TUC, Kofi Asamoah says the recent hikes in utility prices and fuel cannot be allowed to stand when businesses are falling under a precariously harsh economic conditions.

He reiterated the readiness of Ghanaian workers to pour out onto the streets for a massive demonstration next week Wednesday.

The Public Utility Regulation in December of last year announced a 67% and 59 % increase in water and electricity respectively.

Early this year there have been a number of taxes introduced by government part of which were supposed to be used to defray debts owed by utility providers.

The most controversial of those taxes was the energy sector levy which has led to an average increase in petroleum products of about 28 per cent.

Kofi Asamoah said with the introduction of the energy sector levy, the prices of electricity has gone up even beyond the 59 %.

Government in justifying the need to impose the levies said it has to pay debts and raise enough money to solve pertinet issues, including power.

But speaking on Joy FMs' Newsfile programme Kofi Asamoah said government left them with no choice but to hit the streets to press home their demand for a decrease in the announced hikes.

Two separate meetings between labour and government to find an amicable solution to the problem have all hit a snag.

Kofi Asamoah said labour wanted government to reduce both water and electricity to 50% each and in addition scrap completely the Energy sector Levy.

Government and other stakeholders including Parliament have been appealing to the workers to rescind their decision and return to the negotiation table.

But Mr Asamoah said the only way for workers to back down on the demonstration is when government agrees to the TUC proposal.

For now the workers are eager to hit the streets on Wednesday to demand reduction in "killer taxes."

The traditional routes for demonstrations in Ghana have been agreed with the police, Mr Asamoah indicated.

He said the workers had initially planned on holding a back-to-back demonstration but the security forces complained it will be herculean task. So they have agreed that the demonstration will run concurrently across all regional countries.

Akufo-Addo, Ken Take Ghana Back To HIPC – Mahama
29 minutes ago