Is Football killing other sports in Ghana? 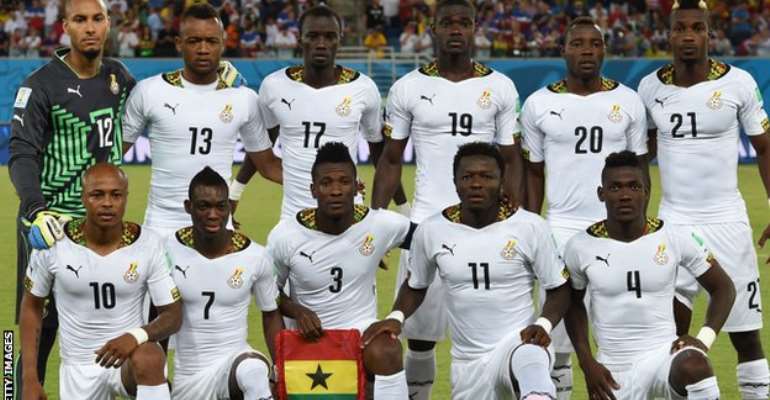 Black Stars - the only sports team we care about in Ghana

Take a look at the sports section of any popular Ghanaian web portal and about 95 per cent of the news there is on football. The situation is not much better in the print and electronic media where non-football news is mostly about what happens in other countries. If you overhear two Ghanaians in a heated discussion over some sporting event, it will invariably be about football.

The only sport that really arouses Ghanaians, and also brings them together, is football. No other sporting activity comes anywhere near the hold football has on Ghanaians. Football is the only game that can call for the personal intervention of the country’s head of state in the solution of a tournament related problem. The only sports organising body most Ghanaians know of is the GFA (which, in the days of yore, used to be called GAFA – Ghana Amateur Football Association). The most well-known sports boss in Ghana is Kwasi Nyantakyi. He is either praised, or more often than not, castigated as a mafia don with an unhealthy hold on the game. Indeed, our Ministry of Sports could as well be called the “Ministry of Football”.

But there seems to be a downside to this. Football has so thoroughly consumed Ghanaians that it seems we no longer realise there are hundreds of other sporting activities that our youth can become good at. The next popular sporting event in Ghana is boxing but it is a very distant second place to football. Athletics come third with a miniscule of the popularity football has.

Even boxing no longer has the same status that produced D. K. Poison and Azumah Nelson and united the country around them. We used to produce some great sprinters. It seems the genes that make black people run fast (whatever it is they are running away from) may have originated on the West Coast through to Namibia and Angola – the source of most of the slaves who were sent to the new world. But these days there are no stars from the origins of the gene pool. Try googling “Handball in Ghana” and the only results you will get will be Suarez’s “hand of God” goal that painfully denied us a place in the semi-finals of the 2010 World Cup. Of the game of handball in the country, you will get nothing.

The Indian immigrant to our country, Hatiramani, did a lot for Table Tennis. But since the death of the man, Ghanaians don’t even know there is a game going by that name. Lawn Tennis and Golf have remained games more for pot-bellied company executives and corrupt politicians than games our youth can take up and distinguish themselves internationally while earning a decent buck.

It has been said that English speaking African countries are not good in balls played with the bare hands. So we are not good at Handball, Volleyball and Basketball. And that is that! What has happened to the cricket tournaments that pitted Ghana, Nigeria, Sierra Leone and Gambia against one another? There was a time when these countries contributed a joint team to the Cricket World Cup – just like the once formidable West Indies team. Cricket was limited to the “dadaba” schools in Cape Coast and Accra and Legon. Are these schools still playing the game? I once read that Rugby was being introduced in Ghana. What has become of that? What is happening to Cycling in Ghana?

If you go through all sporting events in Ghana, you will start with football and soon return to football. The journey through the other sports will be brief. But even football, our only beloved game, is beset with problems. Many people do not think much of the local league. There is an over-emphasis on the national male team, the Black Stars. This is part of the heavy bias towards male sports generally. There are inadequacies in organising the youth game. And we are still cheating on age in youth football. The story has been told of the captain of the U-17 team from Ghana being asked to whom he would dedicate a prize he had won in a tournament. And he said to his wife and children!

The last time we won a major football trophy was the African Cup in Libya in 1982. The only thing we have done better, which was also the country’s finest hour in the game, was our quarter final place in the World Cup in South Africa. Yes, I know we won the Under 20 World Cup in Egypt in 2009. But that is a youth cup which is not the real thing and you cannot be sure how many over-aged players we used in that competition!

There are football academies all over the place these days. Some of them are very costly but parents are willing to pay the huge fees to enrol their children. Gone are the days when parents warned their kids not to play football after classes in case they broke their legs. But there are no similar academies for other sports. For most sports, it is very important to catch talent at a very young age and groom it properly to reach world status. But Ghanaian parents don’t see that other sports too can be money making ventures.

To what extent is the overwhelming popularity of football in our country detrimental to the development of other sports? I should here admit that, having left the country decades ago, I may not be in the best position to talk about the state of non-football sporting events in Ghana. But it is clear that there is not much to write home about them.

If you ask those who know about such things why the standard of other games in the country is so poor, the first thing they will tell you is that there is not much money to go around many sporting events. That is true but is that the whole story?

Yes, we are a poor country. We need to utilise our scarce resources by prioritizing our most important needs, even within sports. And this dictates that we should expend an overwhelming amount of the resources available for sports on football where we can reap immediate benefits.

Another reason the experts will give you is that other sports lack corporate sponsorship. You have to solicit for funds from businesses to help you in your sporting endeavour. In the advanced countries, people with sporting talents are treated as national assets who are helped by the state to reach high. Not in Ghana. Corporate sponsors will want a quid pro quo for their investments and they all gravitate towards football.

There seems to be a dearth of sporting philanthropists in the country. The few we have spend their resources on football. But many do it for tangible returns. Money is needed not only to provide the facilities but to bring in foreign experts and coaches in those games and to provide a livelihood to people who devote all their time to a specific sport.

As it is, the only sporting celebrities in Ghana are footballers. Then there are one or two boxers. There are no role models for our youth in other sports.

There is the need to identify the sports that out youth can engage in that do not require high financial inputs. Handball, volleyball, basketball but also weightlifting for both boys and girls come readily to mind. What about wrestling? This should be the work of our “Ministry of Football”. The uniformed services, which have been known to be good at organised sports, can be made to take these to our youth in the villages since there is an over-concentration of resources in the cities. Our youth in the rural areas should be made to see that football is not the only game they can hope to excel at. They may even have better chances in other sports. Our national sports institutions will also be better placed to help in this endeavour.

I do not pretend to know more than the people on the ground in Ghana. But it seems obvious that we need a reorganization of our priorities in sports. We need to exert ourselves in encouraging non-football games at the elementary school more than we are doing now. There should be a conscious effort on the part of the authorities to introduce new games and not to leave such to just interested individuals.

The successful ones in football should extend their philanthropy to other sports too. It is said Marcel Desailly’s sports complex in Accra caters also for sports other than football. That is great.

It may be necessary to discourage some sports. I have in mind Land Hockey. The corporations that finance that game can lay their resources on basketball or rugby.

And we have SWAG (Sports Writers Association of Ghana) which has a bounden duty to constantly remind us all that there are sports other than football. Is the Sports Minister a former sportsperson who understands it all, or just a political appointee wanting remuneration for his contributions to the party kitty?