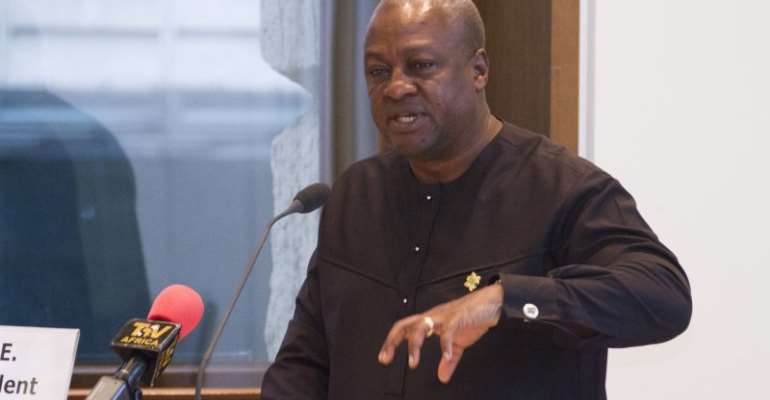 President John Dramani Mahama has revealed that the issues of how to provide fuel for the power generating plants was what was currently outstanding in terms of resolving the power crisis currently facing the country.

According to him, following the work that has been done, there was sufficient generation at the moment but the major problem now was to do with providing fuel for the plants.

Speaking at a press conference at the Flagstaff House Tuesday morning, the President said: “We need to resolve the issues to do with the West Africa Gas Pipeline.”

“There are technical issues in there and even when it operates normally, it operates in a very unpredictable manner. As I speak, the Chief Executive of GNPC and a company called Quantum are in Qatar to discuss the issue of a Floating Storage Regasification Unit (FSRU) – a floating barge which uses liquid and natural gas.”

No more predictions on dumsor

President Mahama who was answering a question on his numerous failed promises to end the energy crisis explained he has learnt not to make any predictions again on the energy crisis facing Ghana and rather decided to leave the technical people to do the talking.

He said as close as the country was towards solving the problem of ‘dumsor’, there was still a gap even though there has been some improvements with supply.

He said when power goes off these days, its normally because there was an outage.

“I believe that in the next eh!, let me not predict, in the next short while, we will be able to overcome the problem of load shedding. I have learnt to leave it to the technical people to talk about and they are having a major press briefing tomorrow [Wednesday].

The President said they [technical people] will brief the press on the routine maintenance that Atuabo will go through. He said it was a scheduled maintenance which means gas will stop flowing for them to re-tune the plants.

He said when the technical people do their briefing, they will inform Ghanaians “where we are currently in respect of resolving the power crisis permanently.”

“We now as a result of the work we did have sufficient generation, the major problem now will be to provide the fuel and so we need to resolve the issues to do with the West Africa Gas Pipeline.