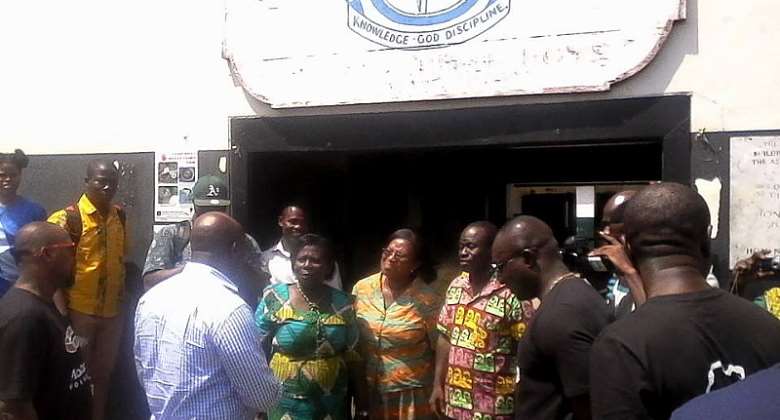 The team which included popular musician Gas Milla and a cross section of the media donated twenty (20) set of balls to the school located in the heart of Accra.

Former Ghana striker Augustine Arhinful presented the set of balls to the principal of the school while inviting them to Sunday’s game against CAF Champions League holders TP Mazembe.

The excited pupils cheered at the sight of Ghanaian football icons in particular former Black Stars captain Stephen Appiah and Laryea Kingston who hail from a closer enclave.

Appiah spoke to the pupils, encouraging them to study hard to realize their dreams.

“We are here to let you know we also made it from here and that you can also do same,” the former Black Stars skipper and international star said.

“But you have to promise me you will stick to your books and do well in your exams to become somebody in future.”

The pupils had the chance to take memorable pictures with their favourite football stars before they departed.

The Dream Team is an assembly of the finest performers in the Ghanaian top flight – augmented with the likes of experienced Stephen Appiah, Godwin Attram John Mensah and Laryea Kingston will be taking on TP Mazembe for the 2015 Africa United Cup on Sunday as part of activities marking the Mo Ibrahim Annual Governance Weekend which is being hosted by Ghana.