In The Eyes Of God, ‘Unmasked’ Criminals And Judicial ‘Terrorism’ 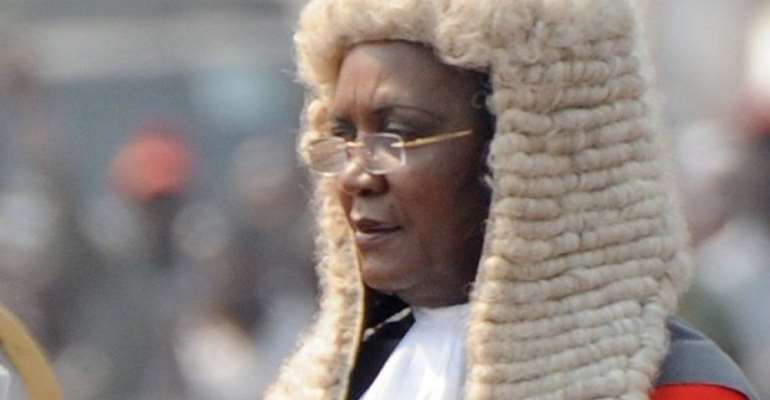 “Judges are but men, and are swayed like other men by vehement prejudices. This is corruption in reality – give it whatever name you please.” David Dudley Field

Ghana – my Motherland, has now assumed global acclaim as one of the most corrupt countries. This certainly has made up-right Ghanaians feel very much disturbed and rightly so. But the question is, how many Ghanaians can chest ourselves out that indeed we are not corruptible and bribable without wearing ‘hoods’ of HYPPOCRISY?

Until Anas Aremeyaw Anas’ Tiger Eye PI exposure on alleged gargantuan acts of bribery/corruption within the Judiciary, the canker within it had until now remained a perception. In that situation, how could an ordinary ‘eye’ of a citizen (if not a “Tiger Eye”) see and point out a judge within our Judiciary as being corrupt or ‘bribe-taker’?

Even the sophistry with which Anas went about his ‘espionage’ self-imposed assignment and succeeded in coming out with his alleged audio-visual evidential recordings – we are all witnesses to similar sophistry the affected judges are using to fight back.

My mission for this piece is to dwell on how apart from the affected judges, the remaining Ghanaians including myself have become saints of no comparison. So-called men of God have condemned and recommended heavy sanctions if the suspects are found guilty. Civil Society Organizations have also voiced their advocacy for punitive measures should the outcome of current investigations go against the judges under reference

Before Anas’ exposure, how many of us knew that the alleged affected judges were that compromising in their chosen noble career? But here we are – faced with the now reality of a perception and the captured ones on tape are just a few that were routinely trapped. How many are out there that have not yet been court? But would they ever be caught?

I very much doubt because the exposure has come as a wake-up call to such people to stop because the digital world we find ourselves make it very dangerous to engage in such practices. And to me that is one good thing about Anas’ undertakings to name and shame acts of corruption and bribery.

Thousands of Ghanaians, including foreign diplomatic dignitaries thronged the Accra International Conference Centre on 22nd September, 2015, when it was premiered. Post-commentaries on viewing the videos have been condemnation on the judges concerned. It stands to reason that all those in the hall and subsequent shows elsewhere have hoisted themselves as “HOLIER THAN THOU”.

What we have all refused to acknowledge is that prior to the Anas’ exposure and as expressed somewhere in this piece – we did not know them as such. It was then a perception with no specific identities. How then can we assert ourselves that we are not worse off, as corrupt people in our chosen professional engagements who have not been caught by Anas’ Tiger Eye secret cameras – yet?

William Shakespear, in his “Measure for Measure” said, “…The jury, passing on the prisoner’s life, May in the SWORN TWELVE (my emphasis), have a THIEF or two GUILTIER than him they try.” I am not in one bit supporting the affected judges as to the alleged scandals.

What I am saying is that just as Anas ‘hoods’ himself to uncover crimes in our society – so have we hooded ourselves in condemning the judges under discussion. Indeed we are the current ‘jurists’ who have a high number of unknown THIEVES who are now passing judgment just as the affected judges did before they were allegedly caught on tape doing the unthinkable.

Today they have found themselves in the net. The development makes me recall a story which was told of two thieves who went on a stealing expedition. An alarm was blown and they all responded to the athletic race of escape. However, one of them was caught and the other who was not identified by the crowd yelled out loud when his colleague was being beaten that “… you those who are closer to him should target the mouth before he incriminates an innocent fellow… ”

That is how I see all of us who have not been caught yet in acts of corruption and bribery.

However, the change that Anas may be succeeding in bringing to the Judiciary could also influence the mis-carriage of JUSTICE if the uncaught remaining ones decide to silently solidarise with their affected colleagues. Let us remember, that it was material/monetary inducement that begot JUSTICE/INJUSTICE for culprits and victims who did not deserve such judgments from the now suspect judges. From what has happened and is still happening so far, I have the strong feeling and fear that “corn cannot get JUSTICE in a court composed of chickens”, an African proverb posits.

This is where I have my fear that ‘JUDICIAL TERRORISM may end up becoming the order of the day. This fear can only be allayed if the Chief Justice, the Judicial Council and other stakeholders call all judges and put some fear of God in them before they become loose canons

The euphoria and spontaneous support for Anas’ work has also elicited a negligent fight back from a few of the affected judges who have dug deep into the laws and judicial practices of the land to hang all that he has done. Justice Dery has so far been the fore-runner who has not been able to reach his destination – yet. In some isolated situations insults have been heaped on Anas, as well as the state being accused of pampering him unnecessarily with security detail.

Illegalities are part of the blame-game, siting the invasion of people’s privacies/subtle ‘cohesive’ methods in trapping them. But how else were the affected judges expected TIGER EYE investigators to conduct themselves? Inform them that they are conducting ‘an under-cover exercise on you members of the Judiciary’? And they would have been forthcoming with what they have been alleged to have done as the video evidence shows?

The actions so far by some of the affected judges who have turned to all the legal/judicial technicalities to survive the imminent investigation further gives out we, the poor who are ignorant of these technicalities – how we have been punished unnecessarily by convictions and jail terms.

But in all that has taken place so far, Anas and his Tiger Eye have been the VICTORS! Why? Because Wendell Phillips once said of law that, “Law is nothing unless close behind it – stands a warm living public opinion”. The overwhelming positive public opinion that has come the way of Tiger Eye is a pointer to how ‘Sacred’ and in High Esteem Ghanaians hold them.

But Anas should be circumspect with his public approval ratings because the judges he has exposed may have handled some cases he exposed earlier and may have been full of admiration for him. But today, anybody seeking their opinion on him knows the obvious.

In the unlikely event that technicalities are used to deflate what ANAS AREMEYAW ANAS and his TIGER EYE have spectacularly done, he and his team will remain forever – HEROES, not only in Ghana but globally – centuries without end.

“Judges” indeed as captured in the preceding quote to this piece, “are but men, and are swayed like other men by vehement prejudices. This is corruption in reality – give it whatever name you please [it remains the same].”