Ebola Virus: When A Handshake Grinds Your Life To A Halt 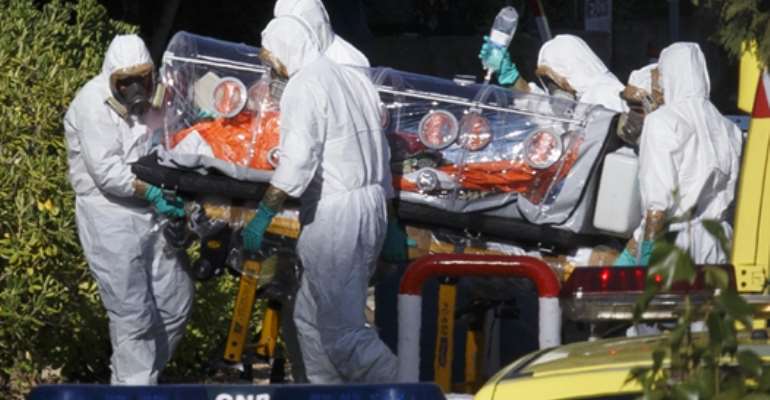 Handshake is one of world’s popular ways of exchanging pleasantries. It is acceptable in timid communities as well as comp temporary societies. There are however several other forms of welcoming relatives, friends and even business associates. African traditional societies are rich with such numerous methods of expressing deep sense of gratitude during meetings of all kinds.

In all, handshake appears to be the most acceptable, easy to adopt and transcending several modifications in our society. To say the least, a serving president in Nigeria at one time proposed handshake as his gift to a national football team for doing the nation proud.The very first time handshake became dangerous in Nigeria was some twelve years ago when male citizens were reported to have lost their private parts through a simple handshake.

Major cities in Nigeria like Lagos, kano, Onitsha, and Port Harcourt went agog with such news that lacked every scientific proof. Investigations however proved that no such thing ever happened and people were free again to shake hands.

The episode of last July 2014 that orchestrated the birth and annunciation of Ebola virus disease in Nigeria again placed another restriction on handshake as it were. What came like a romour requiring just a bath with cooked salt for a permanent cure have suddenly turned real. Handshake has become dangerous again. Ebola virus disease (EVD) was first recorded in 1976 in Nzara and Yambuku remote areas of Sudan and Democratic Republic of Congo respectively.

Though the incident occurred simultaneously, that of Yambuku took place in a village near a river called Ebola, so the disease was so named. It killed 150 people in Sudan and 279 people in Democratic Republic of Congo in a very short space of time before it was brought under control. In 1989, another incident was identified when infected monkeys were imported into Reston Virginia from Mindanao, a town in the Philippines. No one died of this particular infection.

Experts say that fruit bats are the original carriers of Ebola virus. Other animals such as Monkeys, Chimpanzees, Gorillas, Porcupines and forest Antelopes are also carriers and can transmit it to humans who come in close contact with their blood or bodily fluids. It can also be transmitted to persons who come into close contact with the corpse of an Ebola victim. Medical personnel can be infected and are being infected while treating Ebola patients without adhering to infection control precautions.

Ebola virus disease is not airborne. It can only be spread through direct contact with an infected person. At present it has no cure, but only a trial vaccine and drugs made by US and Canadian companies which was used for the two infectedAmericans and the Spanish priest. The Americans survived, while the Spanish priest died. It has not been usedfor the large population of Ebola victims in the whole of Africa either because it has not been approved or it has gone out of stock. The hope for Africans according to experts is to take precautionary measures and employ the trick of prevention as observed by Anne Wojcicki,

“One of the best aspects of health care reform

is it starts to emphasize prevention.”
The few cases in Nigeria which took everybody by surprise are being curtailed. The Nigerian government lunched the offensive, sensitized the public and provided with speed the screening/ treatment centers in both Lagos and Rivers states. The health practitioners were on hand, some of them risked their life in the fight with others having to pay the ultimate price in an attempt to stop Ebola virus from spreading across the length and breadth of Nigeria. The public, the amazing Nigerian public engaged in the fight early striping all markets of hand sanitizers, inventing the new Ebola handshake and adhering to constant hand washing instruction.

Though the war against Ebola in Nigeria seems to be in our favour, it is good to point out that we almost lost the battle. The fact that resident doctors all over the country were on strike when Ebola struck is the indicator that revealed our unpreparedness to face the world most deadly disease. Once Ebola was identified government sacked the over 36,000 doctors rather than unite to fight the common enemy. This stalemate lasted for weeks before the doctors had a rethink, compromised their position to salvage the country. We are proud that Nigeria has proved to the world that she is worth her salt, that she is indeed the true giant of Africa. We can do more, the Nigerian government can do more, and African leaders can do more, because if we stopped Ebola we can also stop malaria using the same principle.

Over 500 CSOs Against Corruption Launches #BringBackDomelevo...
2 hours ago

Hanna Tetteh Or Marrietta Brew Could’ve Been Better Than Jan...
3 hours ago