“Nana Akufo-Addo Will Be A Terrible President” 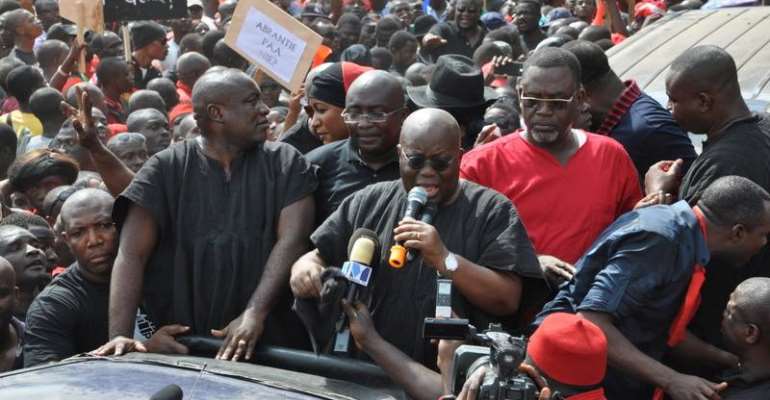 The above quote was from former NPP Member of Parliament and Deputy Minister of Local Government and Rural Development in the Kuffour administration, Hon. Maxwell Kofi Jumah. He confirmed on Asempa FM on June 11, 2015 that he actually said it and the voice on the tape was in fact his. He further stated on the tape that the NPP will kick Nana Akufo-Addo out of office in just three weeks after becoming President.

The recordings of Kofi Jumah on the tape goes further to confirm what another leading member of the NPP has said. That is, in the unlikely event and Nana Addo becomes President of Ghana, he can never sleep with his eyes closed. Wow! Don’t these statements about Nana Addo scare you?

If a leading member and minister of a political party comes our boldly to say his flag bearer will be a terrible President, what else are you waiting to hear? Should you be slapped before you know that Nana Akufo-Addo can never lead Ghana? By the way, what has Nana Addo done or said since 2008 for you to think that Maxwell Kofi Jumah is a liar or the tape was doctored?

The music the NPP folks sing these days is that President John DramaniMahama is incompetent, but my questions is, if Nana Akufo-Addo is that competent, why can’t he use his competence to bring solutions to his own party? Since President Kuffour left the NPP in the hands of Nana Akufo-Addo, the problems and disunity in the party has gone up to the level where a party Chairman has to sacrifice his precious life for the incompetent leadership style of Nana Akufo-Addo. Is this not true?

When the party Regional Chairman, AdamMahama, (may his soul rest in perfect peace) died and the invisible forces took over the running of the party headquarters, the “competent” Nana Akufo-Addo hurriedly organized a press conference to show that he was in control and there was unity in the party. Meanwhile, the party Chairman and General Secretary were not invited to the poorly organized press conference. They were not seen at the press conference and Nana Addo never took questions from the press. Even the announcement of the press conference got to Paul Afoko and KwabenaAgyepong through a third party. These are people in a political party who want to rule Ghana. Imagine that!

The reasons given by Nana Akomea, the Communications Director of the NPP on various radio stations was that Nana Akufo-Addo had to attend another meeting after the press conference. My questions is, was it by force that Nana Addo had the press conference on that day and time? Even in opposition, Nana Akufo-Addo does not know how to schedule his time between meetings to accommodate everybody and allow for questions. As you read this article and knowing what you know now, do you think Nana will have time for the country should he become President? Are these people managing Nana now, be the same people who will manage him when he becomes President? Ghana beware!

The press conference after the death Adam Mahama was to establish unity in the party. Did you see and in fact, have you seen any unity in the party since that bogus press conference? Nana asked Paul Afoko and KwabenaAgyepong to return to the party headquarters to resume their normal duties. Where are the party Chairman and General Secretary now? Do you see why Nana Akufo-Addo will be a terrible President? He can’t even work with two of his top Executive members but the NPP are quick to talk about the incompetence of President John Mahama.

What did Nana Addo say about the factions in the NPP at the press conference? Did he say he will work with everybody and everyone? How come the MPs of the Alan/Kuffour faction lost the primaries in the parliamentary elections? Those who lost are not just MPs but those who are more experienced and have earned good names in their individual capacities. It is only on the watch of Nana Akufo-Addo that MPs who lost in primaries are forming an association. So how many associations will we have in Ghana should Nana become President? Is that not shameful? Why should Dr. Richard Anane describe the factionalism in the NPP as “hostile” but Nana Addo never addressed that in the press statement?

At the press conference, what did Nana Addo say about the invisible forces that took over the party headquarters? Did Nana think just telling Paul Afoko and KwabenaAgyepong to report to the headquarters to work enough? Why was Nana Addo not bold enough to tell the invisible forces to leave the party headquarters immediately? What was Nana afraid of? You see, let’s be serious. If Nana Akufo-Addo cannot control about 20 of the 20-22 year old invisible forces, how can he control the whole army of Ghana? Have you ever thought about that? Seriously, Nana will be a terrible Commander-in-Chief and he does not even deserve that title. A handful of youth in Bolgatanga said they will not allowAfoko and KwabenaAgyepong to attend the funeral of Adam Mahama and truly, these two gentlemen were not at the funeral. Do you call this competent leadership? Do the NPP know what the word “competent “ means or is it because HE John Mahama is the President of Ghana that is why they are using it anyhow?

Hon. Maxwell Kofi Jumah said Nana Akufo-Addo will be a terrible President and from what you know now, he is right. Since 2008, Nana Addo has not done or said anything that should make him look like a serious President-to-be. When you talk of the lack of leadership in the NPP, the response you get from them is that Nana is not yet a President. But do we have to let him become President before we know that he is an old man? President Buhari of Nigeria is reported to have said that at the age of 72, he will be limited in what he is capable of doing. At the moment, Ghana is moving forward and we don’t need old men who will be limited in what they are capable of doing. Nana Akufo-Addo has admitted that he is an old man and so we don’t need him to be our President.

Nana Akufo-Addo has said he will not entertain corrupt politicians in his government. Does he know that Francisca Oteng-Mensah won her Kwabre East parliamentary primaries because there was a curse attached to the bribe she or her representative gave to the delegates to vote for her? Why then did Nana rush to invite and took pictures with her?

Nana Addo is not yet President but he has started loving corrupt politicians. I am not surprised because Nana Addo himself bribed all the NPP delegates with GHC 600,000.00 to win the Presidential slot. So what happened to the reasons why the electoral college of the NPP was expanded?

Under the leadership of the competent Nana Akufo-Addo, the NPP has been reduced to a party of confusion, recklessness, uselessness, visionless, leaderless, meaningless, purposeless, and talkatives. Nana Akufo-Addo will be a terrible President and if he has any competence left in his blood, he should use it to fix the mess in his party. The mess in the NPP is just too much. We cannot accept it anymore. A leader who has such mess in his party will be a terrible President. Period!