Parliamentarians on 'world we want beyond 2015': Sexual and reproductive health and rights in focus 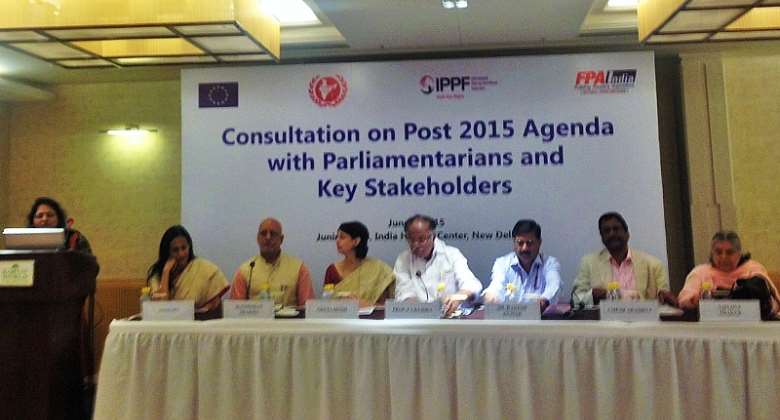 (CNS): The Sustainable Development Goals or SDGs are a new, universal set of 17 proposed goals, with 169 targets that 193 countries (who are members of the UN) will be expected to use to frame their post-2015 development agendas and policies over the next 15 years, once the MDGs expire at the end of this year.

If the countries agree with the draft set of SDGs at the UN summit in New York in coming September, they will become applicable from January 2016. Partnering with, and empowering parliamentarians, who play an important role in the development process by framing policies/ laws implemented in the country, can effectively influence the building of post-2015 development framework and also develop government accountability to these goals. Even Ban Ki Moon, UN Secretary General, has said that, “Parliaments will play a central role in shaping and implementing our new agenda.”

Keeping this in mind, the Family Planning Association of India (FPAI) and Indian Association of Parliamentarians for Population and Development (IAPPD) recently organized a one day consultative meeting with Parliamentarians and other key stakeholders in New Delhi. The objectives of this consultation were to initiate a dialogue with Parliamentarians and other key stakeholders in articulating the Post-2015 development agenda with special focus on sexual and reproductive health and rights (SRHR), and work with the MPs and key influencers to establish a mechanism for initiating action on the SDGs at country level, ensuring greater ownership and accountability.

PARLIAMENTARIANS' SPEAK
All the 12 odd MPs present agreed that making Parliamentarians aware of the post 2015 global development agenda is very important as MPs are a link between people and the government and hence an important component in setting national goals/ policies and achieving them. This is what some of them had to say:

Professor PJ Kurien, Deputy Chairman of the Rajya Sabha, set the ball rolling. He said-- “SDGs are the Bible of development for all countries. They are more comprehensive and inclusive than MDGs. But population stabilization should also find a specific place in them. In India, unless there is frontal attack on our exponential population growth we will not be able to achieve SDGs. Sex education needs to be introduced in schools.”

Second parliamentarian said: “SDGs are a sequel to MDGs. SDGs have to percolate to local levels. Population growth is nullifying economic growth. Explosion of population is in poor families. So special targets must be there for poor sections of society. We have to think global but act local.”

Third parliamentarian said: “Male participation in family planning is very low-- less than 1%. Despite a very large adolescent population, there is no education for adolescents on sexual and reproductive health (SRH). We will have to increase our budgetary allocations for health and curb corruption that siphons off funds. Education and awareness of the masses must increase to increase people’s participation. Unless we engage the whole community we cannot sustain any development.”

Fourth parliamentarian said: “Public healthcare in India is in a mess. But healthcare should not be privatised. It is should be the duty of the government to take care of the health of its public. It is fine to have goals, but most important is to provide good governance to the people. Nothing will be achieved without good governance.”

Fifth parliamentarian said: “In India we make good plans but monitoring and evaluation of programmes is done poorly. We MPs are more concerned with winning elections and giving freebies to buy votes. It is very seldom that MPs think of implementation of national policies. It is essential for all elected representatives to have basic knowledge about goals and national programmes. Inclusive growth should keep in mind not just economic growth, but also social growth, keeping in mind the environment, and should benefit the poorest of poor. People should be involved. Campaigns should be done in regional/ local languages to convey messages which the public can understand.”

Sixth parliamentarian said: “Such consultations would be meaningless unless we supplement them with corrective action on the ground. We need to have very open discussions around the issue of population growth, keeping in mind that population is rising in certain regions and in certain sections of society. Parliamentarians must keep the interest of the nation above the interests of their political parties. Unorganized labour forms a huge chunk of our labour force, yet it is a very neglected sector. Similarly, we have had very regressive agriculture policies. We promoted chemical farming which played havoc with farmers and farming. Laws should be strict and uniformly implemented for all.”

Seventh parliamentarian said: “If civil society and parliamentarians work together we can achieve SDGs - certain goals are of special interest to me. Goal 2 talks of promoting sustainable agriculture. But in our country the agriculture sector has been neglected all along. Our healthcare system is in shambles. To be poor and to be sick is the biggest curse in India. There is still a lot of gender inequality in our country and women still face a lot of discrimination. Unless male mindsets change, there will be no gender equality.”

EXPERTS SPEAK
Dr Rakesh Kumar, Joint Secretary (Reproductive and Child Health), Ministry of Health and Family Welfare, Government of India (MoHFW)-- “Early marriage is a block and so is improper spacing of children. Birth of first child should be delayed by at least 2 years after marriage. India’s adolescent population is the highest in the world and we need to invest in this human capital. We need to focus more on adolescents and their SRHR needs (which has been neglected) achieve SDGs. Imparting quality sex education can help.”

Anjali Sen, Regional Director of International Planned Parenthood Federation (IPPF)'s South Asia Regional Office (SARO), while conceding that SDGs are more comprehensive and are based on integration of three pillars—social, economic and environmental, lamented that they do not specifically include SRH. She said we need to focus more on Goal 3 (Health and Well Being) and Goal 5 (Gender Equality and Women Empowerment).

“Role of Parliamentarians in advancing post 2015 development agenda should be to translate the future development agenda into the national perspective; build new partnerships and work more collaboratively; and ensure national accountability in its implementation. Role of civil society should be to engage with MPs; share information with public by involving media; and engage the community,” she said.

Pooja Parvati, Research Manager, OXFAM reiterated that the post 2015 development agenda is a plan of action for people, planet and prosperity to strengthen universal peace in larger freedom. She cautioned that partnerships without regulations and accountability are bound to fail.

Dr Sushma Dureja, Deputy Commissioner, Adolescent Health, MoHFW, said- “Unless we are able to implement the family planning programme (in terms of maternal and child health) we cannot achieve SDGs. Providing comprehensive safe abortions, doing away with sex selective abortions, dealing with reproductive tract infections (RTIs)/ sexually transmitted infections (STIs) are issues that still need to be addressed fully in terms of gender equality. A lot of advocacy is needed to involve men in family planning programmes. As of now male participation is very low—number of vasectomies is less than 1% of total number of sterilizations.”

Poonam Muttreja, Executive Director, Population Foundation of India lamented that,“There is no global or national political commitment on SRHR for women and this has always been a contentious issue. In MDGs, family planning and SRH were not there initially and but were included in the list B much later. But in SDGs they are nowhere. Merely having good programmes will not help unless they are implemented properly. There has to be a change in the mindset/ behaviour/ attitude of frontline healthcare workers, to achieve these goals. Unless a woman is able to access a range of services without taking permission from her husband, mother-in-law and other family members, we cannot claim that she has any SRH rights. The word ‘sexual health’ frightens people. So we NGOs have to not only find new creative and innovative advocacy methods to educate people and change mindsets, but also need to express ourselves differently.

Women must have more choices for contraception and the right to use what is best for them. Our neighbouring countries have 8-10 contraceptives to choose from. India has got 4 and only 1 is available to the majority of our women. There has to be a drastic expansion of contraception choices available to our women in the government programme.”

Dr Aparajita Gogoi, Executive Director, Centre for Catalyzing Change-“Public pressure creates political will. Hence discourse around SDGs is important. We have to walk the long road of translating global and national commitments to something that would really benefit people on the ground and make SDGs relevant for people for whom they are actually meant. Once they are declared we will have to look for opportunities at national level as to how we can better engage people, CSOs and elected representatives leading to better implementation of programme.

SDGs are not framed on a rights based approach. But there is no reason why we cannot have this approach at national level. We should use proper terminology like adolescent health education instead of sex education. For any policy to be truly effective the framework must start from the acceptance that citizens must be engaged.”

Shivasharanappa, Youth Member FPAI Bidar Branch-“Young people are missing in the debate around SRHR. We have to use a magnifying glass to find mention of youth voices in discussions around SDGs. Sexuality education should be imparted to youth.”

Aarti Dhar, Senior Journalist-“When it comes to SRHR, media has been as conservative as the government and civil society. Media also needs to be trained—most of us are not aware of the nitty gritty and nuances of the SRHR issue. So media trainings must be organized. Focus should be on district level media and vernacular newspapers—they need to be updated and sensitized.”

It is vital that SRHR is reflected in the framework from the beginning to ensure that it gets the priority it deserves. Inclusion of sexual and reproductive health and rights, gender equality, adolescents and youth needs and rights, and non-discrimination should be the key elements of post 2015 development agenda, as sustainable development cannot flourish without them. It is time to act to increase both the political will and the resources to achieve lasting gender equality, women’s empowerment and women’s rights.